In March 1953, Danny Thomas first signed the contract for the show with ABC and chose Desilu Studios to film it using its three-camera method.[1] Two proposed titles during pre-production were The Children's Hour[2] and Here Comes Daddy.[1] 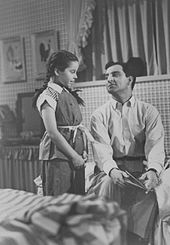 Thomas played Danny Williams, a successful comedian and nightclub entertainer. Jean Hagen played his serious and loving wife Margaret, Sherry Jackson their daughter Terry, and Rusty Hamer their son Rusty. The show's premise dealt with Danny rarely having time to spend with his family and Margaret dealing with the children on her own. Margaret often felt neglected by her husband and on several occasions felt like leaving him. Margaret was a society woman and strict with the children but loved her family. Louise Beavers made several appearances during this era as the Williams' maid, Louise Evans, and often found herself at odds with Danny and sided with Margaret in most fights between the couple. Nana Bryant appeared often as Margaret's kind mother, who Danny and the children were fond of; but Margaret, who had been raised by her aunt and uncle because of her mother being away on stage tours often, was not as warm towards her mother. Bryant died in late 1955 and her character simply stopped appearing. During 1955, Louise Beavers became ill and Amanda Randolph took over the role of Louise.

Shortly after the third season (1955-56) finished filming, Jean Hagen left the show due to dissatisfaction with her role and frequent clashes with Danny Thomas. Thomas was upset with her for leaving as he felt the show wouldn't last without her, but he decided to push on without Hagen. At the start of the fourth season (1956-57), it was explained Margaret had died suddenly off-screen. Danny had Louise and his friends often looking after the children while he was still touring. He decided to move them to a boarding school but later relented and the family moved into a new apartment. During the season, Danny dated a few other women and nearly got engaged to a widowed singer until he found out she didn't like children. By season's end, Rusty fell ill with the measles and Danny hired Kathy O'Hara (Marjorie Lord), a young Irish nurse, to look after him. Danny and Kathy became fast friends and Danny fell in love with her very quickly as did the kids. In the season finale, Kathy proposed to Danny (as Danny was too nervous to do so himself) and the two became engaged. 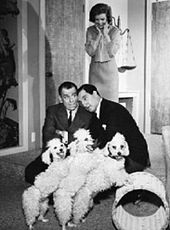 Charlie and Danny don't believe they are really seeing performing poodles in the Williams living room.

Danny and Kathy were married by start of the fifth season (1957-58) and the Williams moved into a larger, brand new apartment and Linda (Angela Cartwright), Kathy's young daughter from her first marriage, was adopted by Danny, and the show's ratings dramatically increased.[3] During this season, Randolph was sick and rarely appeared as Louise. The majority of the season, Louise was said to be recovering from the flu and Kathy was seen doing most of the housework.

During the early part of the sixth season (1958-59), Sherry Jackson was let go by Danny Thomas because he felt she was too old for the part and had few ideas on where to take the character. Terry was said to have gone to a girls school in Paris, Kathy adopted Rusty, and the show then was presented as though Danny and Kathy were always married and Linda and Rusty were both their children. During season seven (1959-60) Terry was brought back played by Penny Parker (as Jackson was still insulted by her firing the year before and refused to return) for a seven episode story arc which saw her engaged and eventually married to Pat Hannigan (Pat Harrington, Jr.), a nightclub friend of Danny's. After the wedding, the Hannigans moved to California and Terry was rarely mentioned and never seen in the program again.

During the last two seasons, Danny and Kathy both regularly traveled (Danny Thomas and Marjorie Lord were tired from their roles and decided to reduce them to a degree) and much of the tenth season they were touring Europe (a handful of episodes featured location shot footage from Europe) and Rusty and Linda were looked after by the Danny's manager, Charlie Halper (Sid Melton) and his wife, Bunny (Pat Carroll). During the eleventh and final season, Thomas decided to retire from the show and the program ended in spring 1964. 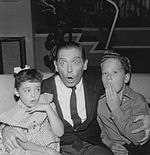 Milton Berle spends some time with Linda and Rusty after he and Danny quit show business. 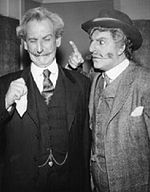 Uncle Tonoose (Hans Conried) gets a lecture from his older brother, Tufik (played by Danny Thomas).

The theme music was various versions (changing over the years) of the traditional Irish song, "Danny Boy".

The series also crossed over to several other series including The Lucy-Desi Comedy Hour[12] and The Joey Bishop Show.[13]

The show ended in 1964, but Danny Thomas, Marjorie Lord, Angela Cartwright, Rusty Hamer, Sherry Jackson and Hans Conried returned in two hour-long "reunion" specials on NBC- The Danny Thomas TV Family Reunion in 1965 (considered the first TV reunion show), and Make More Room For Daddy, which aired as an episode of The Danny Thomas Hour in November 1967. There was then a CBS reunion special, Make Room for Granddaddy, in 1969. The special did so well that it was picked up as a series by CBS but Thomas considered the slot they gave it to be a death slot and pulled the show.

ABC brought it back on a weekly basis in 1970, in Make Room for Granddaddy. In the series, the character of Terry left her son, 6-year-old Michael (played by Michael Hughes) in the care of his grandparents while she and her soldier husband were stationed overseas. New characters were played by Stanley Myron Handelman and former football player Roosevelt Grier. The show only lasted a single season, producing 24 episodes.

Reruns were aired Monday through Friday, on NBC from 1960 to 1965. Subsequently, most of the CBS episodes were then syndicated and played on local stations. The first four seasons from ABC were not put into syndication.

From February 1, 1987 to 1991, the show's 5th through 9th seasons were shown on Nick at Nite. TV Land has also showed several of the Marjorie Lord episodes. GoodLife Television aired the majority of the episodes from the fourth season up until the seventh season (and select episodes from Season Eight and Nine).

The complete sixth season on DVD was released on January 22. 2008.[15] It was released by a different company than the season 5 package and contained uncut episodes with vintage second-run opening credits, though not the actual network, prime time opens.

Several of the early episodes with Jean Hagen can be purchased on discount DVDs, due to the lapse of copyrights and the episodes entering public domain.[16][17]