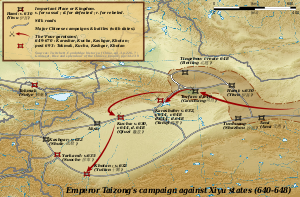 Inner Asia in the 7th and, to a lesser degree, 8th centuries AD was marked by the expansion of the Tang Dynasty's realm in the Tarim Basin, across the Gobi Desert and into Middle Asia. Wars were fought against the Gokturk Empires and Xueyantuo, but also against the states of the Tarim basin. This expansion was not steady; for example, the Tang did lose control of the Tarim basin temporarily to the Tibetans in the 680s, and their expansion north of the Gobi was thwarted in 682. Emperor Taizong's military success was, in part, a consequence of changes he initiated in the Chinese army, including improved weaponry. The emperor placed a new emphasis on cavalry, which was very important because his non-Chinese opponents used the horse effectively in warfare.[1]

The Tang Dynasty was one of the Golden Ages of Chinese history. Coming out of the devastation of the late Sui, Tang emperors were eager to secure China's borders by defeating the Gokturks who were the primary military threat to North China. As a result, Tang forces mounted several campaigns against the Gokturks in order to neutralize them and secure China's borders in the process. Securing the Tarim Basin, which contained key trade routes, was also a secondary objective.

Tang Conquest of the Eastern Gokturks

Tang Conquest of the Western Gokturks

In what has been described as "a response to a surge of something like national sentiment"[15], the Eastern Türkish Kaghanate was restored in 682 by Elterish (a.k.a. Qutlugh) [16]. In the Orkhon inscriptions, Elterish's son describes the modest beginnings of Elterish's struggle against the Tang Dynasty thus:

My father the kaghan set out with seventeen men, and as the word spread that he had set out and was advancing, those who were in the towns went up into the mountains and those who were in the mountains came down, they gathered, and there were seventy-seven men. Because heaven gave them strength, the army of my father was like wolves and his enemies were like sheep. [...] When they were seven hundred, in accordance with the institutions of my ancestors my father organized those who had been deprived of their state, those who had been deprived of their kaghan, who had become slaves and servants, who had lost their Türk institutions"[17]

The new Kaghanate was centered on the upper Orkhon river and in the Ötükän, presumably the Khangai mountains. After decades of war and border raids with China, peace was made in 721-22.[18] The second Gokturk Khanate remained a tributary and vassal of the Tang Dynasty. It then survived until the 740s, when it fell due to internal conflicts and was succeeded by the Uighur Kaghanate[19]

In 755, the Tang Dynasty was subject to the devastating Anshi Rebellion and lost much influence in Inner Asia, which came to be dominated by the Ughyurs. Tang influence and rule over the Northwestern regions, however, continued until the dynasty's fall in 907, at which time these areas were taken over by the Tanguts, who later established Xi Xia[20].

Fall of the Ughyur Khanate

By the mid-800's, the power of the Ughyur Khanate was on the wane. Attacked on all sides, the Ughyurs retreated to the Xinjiang area and their Khanate collapsed, to be replaced by other peoples[22]

This article incorporates public domain material from websites or documents of the Library of Congress Country Studies. - Mongolia