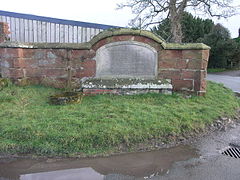 The village well and pump, completed in 1864, in Merrington.

Merrington is a small village in Shropshire, England. It is situated to the north of the larger village of Bomere Heath and lies in the parish of Pimhill. Nearby, to the west, is the hamlet of Old Woods.

The village can be dated back nearly a millennium, with a record of a manor held here by Hunning in 1066. It was recorded as "Gellidone" in the Domesday Book, by which time (1086) it was held by a Norman noble.[1]

The famous gardener, horticulturist and broadcaster, Percy Thrower, built his own house in the village, called "The Magnolias", in 1963 on land he acquired with a friend. This gave him a garden of about one and a half acres to "play with", something which he had never had before. The garden subsequently became the location for some of the episodes of Gardeners' World. He opened the garden to the public in 1966, and this became an annual event to raise money for charity.

The village also has a notable Victorian pump and deep well, paid for by Robert Slaney and his wife, members of a local wealthy family.[1]

Just to the west of the settlement is Merrington Green. An area of heathland/woodland here is common land, owned by the local authority and managed by the Shropshire Wildlife Trust.[1] Fishing ponds have also recently been established at the nearby Hayes Farm.[2] The Green was a US Army camp during World War II and German prisoners of war were kept here for a time.[1]

The centre of Merrington is situated at 104m above sea level; at Merrington Green there is a small hill which summits at 122m. The area is quite well wooded, with Merrington Green, the woods towards Old Woods, and the woodland to the east at Pim Hill.