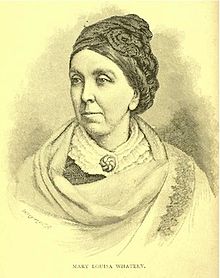 Mary Louisa Whately (August 31, 1824-March 9, 1889) was a missionary in Egypt. She spent over 30 years building schools for both girls and boys, ministering to their families and writing books about Egyptian life. She lived among the people and has written several books based on her experiences. Whately was the daughter of Archbishop of Dublin Richard Whately. Mary Louisa Whately was the first person to build educational facilities for the lower classes in Cairo, especially for Muslim women, and establishing schools for all rather than only those who could afford it. Whately was well loved by the people in Cairo but traversed the Nile preaching and educating.

Mary Louisa Whately had little formal education. She was taught by her well-educated mother and father as a girl in reading, writing, and school subjects such as history, arithmetic and science. They also trained her in religious studies. Mary Louisa Whately was a quick learner and was diligent in her studies. When the family moved to Dublin, Archbishop Whately opened a school where Mary Louisa Whately and her siblings taught the city children. This training through teaching was instrumental in Mary Louisa Whately's later career. She was also educated in Italian and French and gained valuable experience working with various nationalities during the Irish famine through this. When Mary Louisa Whately moved to Cairo she endeavoured to learn Arabic and hired Mansoor Shakoor, a native missionary, to teach her.

Mary Louisa Whately first moved to Cairo, Egypt in 1860 to recover after suffering health difficulties. Upon arriving she found a house in the lower class area of Cairo and discovered there were no schools available for young girls in this society. Mary Louisa Whately bought a house and hired a poor Syrian girl who lived in the rooms below to help her teach. This was the first school in Egypt for Muslim girls. In 1861 Whately moved to Pau, France to rest and continue to recover. That winter Whately cared for the son of a Scottish minister who was terminally ill. Whately's work with this man was instrumental in her decision to open a medical mission in 1879. In the winter of 1862 Whately returned to Cairo and re-opened the school she had started. Shortly after Whately arrived in Cairo she opened a school for Muslim boys. Whately hired her Arabic teacher Mansoor Shakoor and his two sons to help her teach at both schools. This allowed Whately to traverse the Nile and visit other towns and villages. Whately read to the women and children of these towns and provided what education and medicine she could. In 1869 the Prince of Wales visited Whately in Cairo which led to a grant of land just outside the city walls being given to Whately for the purpose of building a school. As the school grew Whately decided to open a medical facility on the campus for care and training.

Mary Louisa Whately wrote 12 books on her missionary works and regarding life in Egypt. She wrote them to educate people in Great Britain about daily life especially regarding the poor in Egypt. Her books Child-Life in Egypt, Ragged Life in Egypt, Scenes from Life in Cairo and Stories of Peasant Life on the Nile were some of the first of their kind regarding Egypt. They describe the hardship and tasks that the poor and the children have in life simply to survive. Her collected works Letters From Egypt to Plain Folks at Home were an explanation of what Mary Louisa Whately was accomplishing in Egypt, what Whately's own daily life included and what the lives of those with whom Whately lived were like. Whately wrote other books reflecting on certain experiences she had and people she met. Whately's books A Memoir of Mansoor Shaknoor and The Prism... were about certain people who had a significant impact on Whately's life and ministry.