Mary, Princess Eristavi (Georgian: მერი ერისთავი-შერვაშიძე, née Shervashidze 1888 - died January 21, 1986) was a prominent Georgian aristocrat, fashion icon, and one of the earliest models of Coco Chanel. She held a respectable position in the Georgian high society, as well as the Russian Imperial court for the last few decades of its existence. Mary is sometimes believed to be the hopeless infatuation of a famous Georgian poet Galaktion Tabidze.

Mary as a lady-in-waiting

Mary was born in Batumi to a family of a prominent Georgian General Major Prokof Shervashidze. She was popular in Georgia for her beauty and gentle complexion and even drew compliments from Emperor Nicholas II of Russia when he met her during his 1912 visit to Tiflis.[1]

Because Mary's father became a member of the Imperial Duma, the family soon had to move to Saint Petersburg where Mary became a lady in waiting to Empress Alexandra Feodorovna of Russia. After her father's death, Mary moved back to her native Georgia and spent the rest of her youth in the west of the country with her mother and twin sisters, Ellen and Tamar.

Marriage and Bolshevik invasion of Georgia

After the establishment of the First Georgian Republic following the Russian Revolution, Mary's fiancé Prince George Eristavi - an important Georgian nobleman and a former aide-de-camp of Nicholas II - returned to Georgia with an intent to marry her. They wed soon after his arrival and likely because of security reasons, settled permanently in the country which at that time was a stable Menshevik stronghold under German protection.

The peace in Georgia did not last long and several years into their marriage, the couple was forced to flee the country during the 1921 Red Army Invasion. To escape imminent imprisonment, deportation, or death, Mary, along with other prominent Georgian noblemen and government officials, departed for France on a ship from her childhood city of Batumi. She was reunited with her husband in Constantinople where Prince George had been waiting for her after being forced to leave Georgia early on during the start of hostilities;the couple continued the voyage to France together.

After arriving in Paris, Mary and George settled on Rue de la Tour in the 16th arrondissement, a district popular with the French high society. Because of the losses incurred as a result of fleeing Georgia, Mary's family met some financial problems while living in this expensive neighborhood. For this reason, Mary's mother and sisters, Ellen and Tamar, initially lived with the young couple. This situation changed when the family managed to open its own clothing atelier and further improved as Mary found a modeling position with Coco Chanel, an increasingly popular French designer at the time.

Soon after this success, Mary's family moved out and her husband, George, passed away before the couple had any children. Mary spent the rest of her life living alone on the Rue de la Tour and rarely made contact with other Georgian émigrés, with the exception of her visits to a local Georgian church. In the final years of her life she was forced to move to a nursing home where, thanks to her improved financial circumstances, she was provided with a personal maid. Despite the relocation, she continued to visit her friends in the 16th arrondissment to play cards. According to her friend Babo Dadiani, Mary's room was filled with flowers from known and unknown admirers.

Because of Soviet Union's closed-door immigration policy, Mary, just like other émigrés from the First Republic, was never able to revisit her native Georgia, passing away in France at the age of 98. 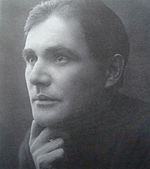 A famous Georgian poet Galaktion Tabidze is sometimes thought to have been in love with Mary. The word of Tabidze's alleged romantic feelings for the princess spread throughout Georgia after the publication of his poem titled "Mary," in which the poet bitterly described the wedding ceremony of a certain Mary, without specifying whether he was referring to Princess Eristavi. Princess Mary herself disagreed with the rumors, stressing that the poem was first published in 1915 in a Georgian journal Theater and Life, while her wedding to Prince George Eristavi did not occur until 1918.[2] Some sources confirm this, alleging that it was only in 1935 when Galaktion met Mary by accident as she sat in front of Louvre.[3]