Marie-Josephte Corriveau (1733 at Saint-Vallier, Quebec – April 18, 1763(1763-04-18) at Quebec City), better known as "la Corriveau", is one of the most popular figures in Québécois folklore. She lived in New France, and was sentenced to death by a British court martial for the murder of her second husband, was hanged for it and her body hanged in chains. Her story has become legendary in Quebec, and she is the subject of numerous books and plays.

A gibbet like that in which Corriveau was exhibited after her execution, the "cage" of Corriveau

La Corriveau was born in 1733, most probably in the January or February,[Note 1] and baptised on May 14, 1733, in the rural parish of Saint-Vallier in New France as "Marie-Josephte Corriveau". She was the only surviving offspring of Joseph Corriveau, a farmer, and Françoise Bolduc. Her ten brothers and sisters all died in childhood.[1]

Corriveau married at the age of 16, on November 17, 1749, to Charles Bouchard, aged 23, also a farmer. Three children were born in this marriage: two daughters, Marie-Françoise (1752) and Marie-Angélique (1754), followed by a son, Charles (1757). Rumors (that only started after the death of her second husband) say that she murdered him, as there is no concrete record of his death. Charles Bouchard was buried on April 27, 1760, and she remarried fifteen months later, on July 20, 1761, to another farmer from Saint-Vallier, Louis Étienne Dodier. On the morning of January 27, 1763, he was found dead in his barn, with multiple head wounds. Despite an official recording of the cause of death being from kicks of horses' hooves, and a speedy burial, rumours and gossip of murder spread rapidly through the neighbourhood. Dodier was on bad terms with his father-in-law and with his wife.

New France had been conquered by the British in 1760 as part of the Seven Years' War and was under the administration of the British Army at this time. On hearing the rumours the local British military authorities charged with keeping order set up an inquiry into Dodier's death. The inquiry opened in Quebec City on March 29, 1763, at the Ursulines of Quebec, charging Joseph Corriveau and his daughter Marie-Josephte, before a military tribunal made up of 12 English officers and presided over by Lieutenant Colonel Roger Morris. The case ended, on 9 April, with Joseph Corriveau being sentenced to death, for culpable homicide of his son-in-law. Marie-Josephte was found to be an accomplice to murder, and sentenced to sixty lashes and branded with the letter M on her hand. One of Joseph Corriveau's nieces, Isabelle Sylvain (who he employed as a servant), had testified but changed her story several times during the hearing; she was found guilty of perjury and given thirty lashes and branded with the letter P.

Condemned to hang, Joseph Corriveau then told his confessor, that he was no more than an accomplice to his daughter, after she had killed Dodier. At a second trial, on 15 April, Marie-Josephte testified to having killed her husband with two blows of a hatchet during his sleep, because of his ill-treatment of her.[2] The tribunal found her guilty and sentenced her to hang, her body after to be "hanged in chains" (that is, put up for public display on a gibbet).

The place of execution was Quebec, on the Buttes-à-Nepveu, near the Plains of Abraham, probably on 18 April.[3] Her body was then taken, as directed by the sentence, to be put in chains at Pointe-Lévy, at the crossroads of Lauzon and Bienville[4] (today the Rue St-Joseph and the Boulevard de l'Entente).[Note 2] The body, on its iron gibbet, was exposed to the public view until May 25 at the earliest. Following the requests of those living nearby, an order from the military commander of the district of Quebec, James Murray, addressed to the captain of the militia of Pointe-Lévy, permitted its being taken down and buried.[4]

In 1849, the "cage" was dug up from the cemetery of the church of St-Joseph-de-la-Pointe-Lévy when a pit was dug.[Note 3] Soon after, the cage was stolen from the church cellar, and acquired by the American impresario P. T. Barnum and put on display as a "macabre object".[5] After that, it was put on display at The Boston Museum. The museum slip indicated its provenance with two words: "From Quebec".[5][Note 4] 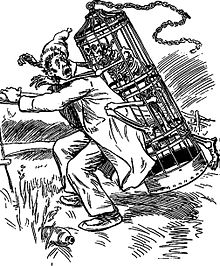 The post-mortem exhibition of Corriveau's remains at a busy crossroads (an unusual punishment and unknown in the time of the French regime, and reserved in England for those found guilty of the most serious crimes[Note 5]); the repercussions in the trial; the rumour that her father would be convicted of murdering Dodier at his daughter's instigation; and the gossip which grew up around the circumstances of the death of her first husband all stirred up the popular imagination and became legends still told today in the oral tradition — increasing the number of murdered husbands to as many as seven and likening la Corriveau to a witch.

The 1849 discovery of the iron cage buried in the cemetery of St-Joseph parish (now the Lauzon district) served to reawaken the legends and the fantastic stories, which were amplified and used by 19th century writers. The first, in 1863, Philippe Aubert de Gaspé in Les Anciens Canadiens, has a supernatural Corriveau hanging in the Pointe-Levy cage, terrorising one night a passer-by conducting a witches' Sabbath and Will-o'-the-wisp at the Île d'Orléans.[6] James MacPherson Le Moine (Maple Leaves, 1863)[7] and William Kirby, following in his footsteps (The Golden Dog, 1877[8]), made her a professional poisoner, a direct descendant of La Voisin, famous for her purported role in The Affair of the Poisons. Writers and historians such as Louis Fréchette and Pierre-Georges Roy have tried to give Corriveau's history, but without completely separating the facts from the anachronistic fantasies added in legend and novels.[9]

The figure of Corriveau still inspires novels, songs and plays and is the subject of argument (was she guilty or not?). Oral tradition also perpetuated and has not stopped, and remains alive, as is evidenced by the numerous stories collected in the lands of many regions of Quebec.[Note 6] 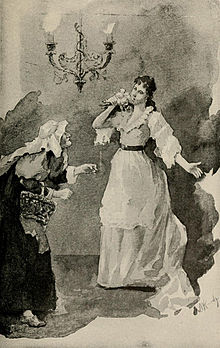