"The Adventures of Dunno and his Friends" book cover

Dunno, recognized by his bright blue hat, canary-yellow trousers, orange shirt, and green tie, is the title character of Nosov's world-famous trilogy, The Adventures of Dunno and his Friends (1954), Dunno in Sun City (1958), and Dunno on the Moon (1966). There have been several movie adaptations of the books.

The three fairy tale novels follow the adventures of the little fictional child-like people living in "Flower City". They are described to be sized like "medium cucumbers", a quality that has earned them the name "shorties" or "mites". All fruits and vegetables growing in Flower City are, however, their regular size, so the Shorties invent sophisticated methods of growing and harvesting them. In Nosov's universe, each shorty occupies his/her own niche in the community and is named accordingly.

The Adventures of Dunno and his Friends

In Flower Town, Dunno gets into heaps of trouble. First, he becomes convinced that the sun is falling and manages to scare half the town before Doono, Dunno's brainy antithesis (his name is derived from the Russian "знаю", I know) clears everything up. Then he proceeds to try music, art, and poetry, but his unorthodox endeavors only irritate his friends, and he is forced to quit. Next, ignoring the warnings of Swifty, Dunno crashes Bendum and Twistum's car into the Cucumber River and ends up in the hospital. He then gets into a fight with his best friend Gunky for not ending his friendships with the girl-shorties Pee-Wee and Tinkle.

Doono proposes to build a hot air balloon and go on an adventure. He and his friends begin extracting rubber, weaving the basket, and making emergency parachutes out of dandelions. A large rubber balloon is then inflated, fastened to the basket, and filled with hot air. The parachutes and other supplies are loaded, and sixteen seats are accommodated for. Everyone helps with preparations except for Dunno, who is too busy bossing everyone around and providing useless advice. The day of the departure comes, and Doono, Dunno, and fourteen other Mites come on board. Shot takes with him his dog, Dot. By this time, half the town still does not believe the balloon will be able to fly, but the balloon successfully rises off the ground, and all the shorties of Flower Town cheer. Gunky waves to Dunno from the ground but Dunno shuns him.

The balloon eventually crashes near the Greenville, inhabited only by girl-Mites (boy-Mites had left for the Kite Town where they can carry out freely their boyish activities), who took balloonists to the hospital to care for them. As Doono (who escaped from the balloon by parachute before the crash) is absent, Dunno describes himself to girl-Mites as balloon inventor and boy-Mites' leader. When he visits the hospital, he talks boy-Mites into supporting his version of facts, in exchange promising to help them out of hospital as soon as possible. With the time, Dunno's lies are discovered and he's mocked by boy-Mites, but consoled by girl-Mites.

After receiving a magic wand from a wizard, Dunno, Knopochka, and Pachkulya Pyostrenkiy wish for a car and go on a road trip to Sun City. During their journey, they see many technological marvels like futuristic cars, bizarre architecture, televisions that can communicate with you, computerized chess players, etc. They also run into some trouble in the city, particularly when Dunno uses his magic wand to turn a Shorty into a donkey, and then turns two donkeys and a hinny into Shorties.

Dunno on the Moon

Znayka discovers that his moon rock (that he obtained from his previous travel to the Moon) creates a no gravity zone when interacting with a magnetic field. He uses this knowledge to build a rocket ship that will go to the moon much more easily because of being virtually weightless. However, Dunno and Ponchik are not allowed to go; Dunno , because of his undisciplined behavior, and Ponchik, because of his inability to cope with non-gravity effects. The night before the rocket launch, Dunno and Ponchik sneak into the ship and accidentally launch the rocket.

When they arrive on the moon, Dunno and Ponchik become separated and Dunno falls through a cave and discovers a whole separate society of mites living inside the moon. However, unlike on Earth, these mites do not have "giant food" (that is, their fruit and vegetables are sized in proportion to the mites, rather than to normal humans like on Earth). The moon society is a corrupt capitalistic state: the millionaires control all the factories and squander their money away on unnecessary luxuries, the police is violent, corrupt, and stupid, everyday citizens struggle to survive and live in rat infested barracks.

Dunno gets thrown into jail for not having money to pay for his meal at a restaurant and is mistaken for a wanted criminal by the stupid police officers. In jail he meets Miga - a fast-talking schemer, and Kozlik - a poor, gentle worker. Upon getting released from jail, Miga introduces Kozlik and Dunno to Zhulio - another con man, and the four decide to start a company selling stocks to raise money to get "giant seeds" from Dunno's rocket ship and plant them on the moon. The stocks sell well and soon the four friends have lots of money. However, some of the local millionaire businessmen are worried that giant food will mean that poor workers can get richer and the millionaires may lose money. Their leader, Spruts, convinces Miga and Zhulio to steal the money and run leaving Dunno and Kozlik jobless and penniless.

Meanwhile, Ponchik finds the same cave and also goes inside the moon. However, he quickly discovers salt and opens his own business making and selling it. He becomes a millionaire but then becomes bankrupt when the price of salt becomes too low. Then Ponchik becomes an average worker.

Dunno and Kozlik work odd jobs but are still starving and living in poverty in a rat infested basement. Kozlik gets bit by a rat and becomes sick. Just then, Dunno gets a job as a dog nanny for a rich woman and makes enough money for a doctor for Kozlik who slowly recovers, but the rich woman finds out that Dunno took her dogs to the rat infested basement and fires him. Dunno and Kozlik then end up living on the street. Since Kozlik has lost his hat and Dunno lost his shoes they are breaking the law and get sent to Fool's Island which has a toxic gas that turns all the people there into sheep which are then sheared for their wool.

Later Dunno's friends come to Moon with giant seeds, which results in elimination of poverty and establishment of a communism-like economical system.

Russian stamp with the image of Dunno (1992) 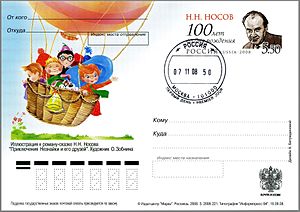 The illustration for The Adventures of Dunno and his Friends. Postal card, Russia, 2008.

Named for its abundance of flowers, all streets are named after flowers as well. The Flower City is located by the Cucumber River, on the shore of which many cucumbers grow. Here boy-shorties and girl-shorties live together, but often have trouble getting along.

Named for its abundance of trees, only girl-shorties live here.

Named for its abundance of decorative kites, only boy-shorties live here.

Named for its perpetually sunny weather, it is a shorty utopia noted for its incredible technological advances.

Police and justice (whose names share the same suffix):

An important characteristic of the Dunno trilogy is its heavily didactic nature. Nosov describes this as an effort to teach "honesty, bravery, camaraderie, willpower, and persistence" and discourage "jealousy, cowardice, mendacity, arrogance, and effrontery." Strong political undertones are also present. In addition to general egalitarianism and feminism, communist tendencies dominate the works. The first book takes the reader into a typical Soviet-like town, the second into a communist utopia, and the third into a capitalistic satire . Nosov's captivating and humorous literary style has made his ideologies accessible to children and adults alike.