The Doubs is a 453 km long river in eastern France and western Switzerland, left tributary of the Saône. Its source is near Mouthe in the western Jura mountains.

First it flows northeast, more or less along the French-Swiss border (forming the border for approx. 40 km). Near Montbéliard it turns southwest, until it flows into the river Saône in Verdun-sur-le-Doubs, approx. 20 km northeast of Chalon-sur-Saône. Its entire course resembles an inverted letter U, with the northeastern corner the only point at which the Doubs flows into Switzerland as far as Saint-Ursanne. 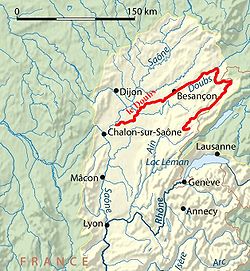 Course of the Doubs

The Doubs flows through the following Departments of France, Cantons of Switzerland, and cities: