Lola Rodríguez de Tió[note 1], (September 14, 1843-November 10, 1924), was the first Puerto Rican born poetess to establish herself a reputation as a great poet throughout all of Latin America.[1] A believer in Women's Rights, she was also committed to the abolition of slavery and in the independence of Puerto Rico.

Rodríguez de Tió (birth name:Dolores Rodríguez de Astudillo y Ponce de León) was born in San Germán, Puerto Rico. Her father, Sebastián Rodríguez de Astudillo, was the founder of the Colegio de Abogados de Puerto Rico (College of Law of Puerto Rico) and her mother, Carmen Ponce de León, was a descendant of Juan Ponce de León. Rodríguez de Tió received her education at home where she was home-tutored. She developed a life-long love for literature, especially for the works of Fray Luis de León which were to serve her as a source of inspiration. She was very assertive in her early years, at the age of seventeen she demanded to be allowed to wear her hair short, which went against the conventional norm of the time, a personal trademark that she kept through her life. 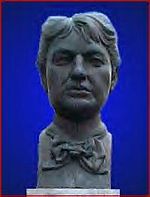 Rodríguez de Tió moved to Mayagüez, with her family. There she met Bonocio Tió Segarra, whom she married in 1863. Rodríguez de Tió became a writer and book importer who often wrote articles in the local press and was as much of an activist against the Spanish regime as was allowed by the government. After marrying Tió, she published her first book of poetry,"Mis Cantos" which sold the then amazing amount of 2,500 copies.[2]

In 1867 and then again in 1889, Rodríguez de Tió and her husband were banished from Puerto Rico by the Spanish appointed Governors. On their first exile they went to Venezuela and on their second banishment they first moved to New York where she helped José Martí and other Cuban revolutionaries, and later to Cuba, where the couple resided until their respective deaths. Their home became a gathering point for politicians and intellectuals as well as exiled Puerto Ricans. In 1868, inspired by Ramón Emeterio Betances's quest for Puerto Rico's independence and by the attempted revolution called the Grito de Lares, she wrote the patriotic lyrics to the existing tune of La Borinqueña. In 1901, Rodríguez de Tió founded and was elected member to the Cuban Academy of Arts and Letters. She was also an inspector of the local school system. She was well known in Cuba for her patriotic poetry about Puerto Rico and Cuba.[2] Some of Rodríguez de Tió's best known works are "Cuba y Puerto Rico son..." (Cuba and Puerto Rico are..) and "Mi Libro de Cuba" (My Book about Cuba).

In 1919, Rodriguez de Tió returned to Puerto Rico where she was honored with a great banquet at the Ateneo Puertoriqueño after she recited her "Cantos a Puerto Rico". Lola Rodríguez de Tió died on November 10, 1924 and is buried at the Colón Cemetery in Havana, Cuba.[2]

It is believed by some that the design and colors of the Puerto Rican Flag, which were adopted in 1954, came from Rodríguez de Tió's idea of having the same flag as Cuba with the colors reversed. Puerto Rico has honored Lola's memory by naming schools and avenues after her.[3]

Lyrics to the revolutionary version of "La Boriqueña"

The following are the lyrics to Lola Rodríguez de Tió's 1868 revolutionary version of "La Boriqueña":