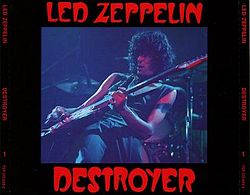 One of the photos bootleggers have used for this album's cover. Due to the nature of bootlegging, there is usually no consensus on covers. 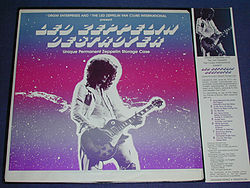 Destroyer is a bootleg recording from the English rock group Led Zeppelin's performance at Richfield Coliseum, Cleveland, Ohio on April 27, 1977. The soundboard recording is from the first show of two nights at the venue, which were part of the band's 1977 North American Tour. The album is technically titled simply Destroyer.

Initial vinyl pressings of the bootleg incorrectly credited Seattle, Washington as the location of this show.[1] A limited edition of the four-LP set came in a plastic film reel carrying case which says recorded June 24 "LED ZEPPELIN DESTROYER Unique Permanent Zeppelin Storage Case", the liner notes thanked John Bohnam for letting them use the tape, and the LPs were marred by segments of other songs randomly spliced into other songs. The later three-CD sets fixed these errors, and eventually versions remastered from lower-generation source tapes surfaced. The exceptional sound quality throughout the performance is described by some sources as "almost perfect".[2] It was the first, and for many years the only, professionally recorded mixing desk tape to escape from the band's possession.[1]

The bootleg should not be confused with an audience recording from the following night in Cleveland, sometimes entitled The Destroyer. Though marred by poorer sound quality, and incomplete as a result of using 60-minute (instead of the longer 90-minute) cassette tapes for the recording, many critics consider this second performance better than the more famous first Destroyer gig.[1]