The Song Remains the Same (album)

The Song Remains the Same (album) 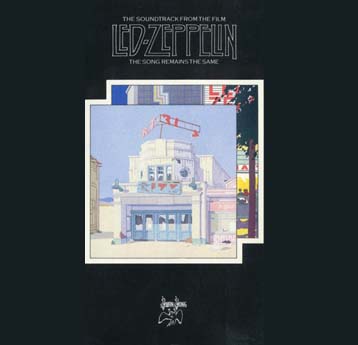 "The Song Remains the Same" is the soundtrack album of the concert film of the same name by the English . The album was originally released in 1976, before being remastered and re-issued in 2007.

The recording of the album and the film took place during three nights of concerts at New York's , during the band's 1973 concert tour of the United States. All songs were recorded by using the Mobile Studio truck, and later mixed at in and in .

The album was released on , , by . The sleeve design depicted a dilapidated movie house located on film studios in , which was used by the group for rehearsals prior to their 1973 tour.

Since its release, band members have expressed a lack of fondness for the recording. Jimmy Page has admitted that the end product was hardly the best representation of Led Zeppelin as a live band:

In an interview he gave to rock journalist , Page elaborated:

Until both the album and the film were remastered and re-released in 2007, there were significant differences between the two in terms of the songs included on each. These differences were as follows:

*The film included "Black Dog", but not "".
*The soundtrack album included "Celebration Day", but not "Black Dog".
*The film also included "", the introduction to "Heartbreaker", the instrumental "Bron-Yr-Aur" (which appeared on "") and a piece called "Autumn Lake", none of which featured on the album.

Of the songs that both the album and the film had in common, some of the recordings featured on the album were of different performances from those in the film. Other tracks which were recorded at Madison Square Garden, but omitted from both the film and the soundtrack album, included "The Ocean" and "". A comprehensive study of the sources of the original album and the edits is available at [http://www.thegardentapes.co.uk/ The Garden Tapes] .

"The Song Remains The Same" soundtrack album was reissued on CD on November 20, 2007, with the surviving band members having overseen the remixing and remastering of the original release. This coincided with the re-issue of the film, available on DVD. The new version of the soundtrack included six songs that were not on the original album release: "Black Dog", "Over the Hills and Far Away", "", "", "The Ocean" and "Heartbreaker", plus new liner notes by Cameron Crowe.

Thus, with the 2007 re-release of both the album and film, the songs were synchronized so that the full set-list from the concerts was available on both, with each song mixed the same way (the only exceptions being "Bron-Yr-Aur" and "Autumn Lake", both of which continued to be absent from the album).

Due to legal complications, the band decided not to change the video portion of the original movie for the re-release.

The audio mixes also differed from those found on the 2003 "". The most obvious example is that "Black Dog" was two minutes longer on the 2003 DVD than on the 2007 releases.

On July 29, 2008, a 4-LP edition of the 2007 re-issue, on 180 gram audiophile vinyl, was released. It was presented in a deluxe archival two-piece box with foil-stamping. It includes a 12-page oversized full-color booklet with dozens of previously unpublished stills from the film, as well as four individual jackets with new and unique artwork. A special white vinyl edition was also printed in very limited numbers. Just 200 were produced, with only 100 being made available to the public. These are now very highly sought-after collectors items.

(* Not on original soundtrack release)

* [http://www.thegardentapes.co.uk/ The Garden Tapes] - a study of sources of the live material and the edits for release on this album.