The first season of Desperate Housewives, an American television series created by Marc Cherry, commenced airing in the United States on October 3, 2004, concluded May 22, 2005, and consisted of 23 episodes. It tells the story of Mary Alice Young, a seemingly perfect housewife who commits suicide, fearing that a dark secret, involving her, her husband, and their son would be exposed. At her wake, Mary Alice's four close friends and the main characters, Bree, Lynette, Susan and Gabrielle, are introduced. All of them live in the suburb of Fairview on Wisteria Lane. Narrating the series from the grave, Mary Alice describes how her friends try to find out the reason for her suicide, while trying to deal with the problems of their personal lives.

Desperate Housewives' first season aired in the United States (U.S.) on Sundays at 9:00 pm ET on ABC, a terrestrial television network.[2] In addition to the 23 regular episodes, a special, Sorting Out the Dirty Laundry, aired on April 24, 2005.[3] The season garnered an average of 23.7 million viewers in the U.S. per all 23 episodes, ranking as the fourth most-watched television series during the 2004–05 American television season.[4] In the United Kingdom, the season premiered on January 5, 2005, and subsequently aired Wednesdays at 10 pm on Channel 4.[5] It aired in Canada on CTV Television Network and in Australia on the Seven Network.[6][7][8] 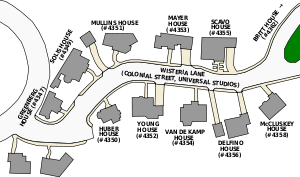 Desperate Housewives was filmed at the backlot Colonial Street. This map depicts the locations of the houses of the characters in the series.

Marc Cherry wrote the script for the Housewives pilot and his agent appealed it to six networks, (CBS, NBC, Fox, HBO, Showtime and Lifetime) only to have all of them turn it down. Later, after his previous agent was arrested for embezzlement, he hired a team of new agents, who saw the script "as a soap opera with dark comedy in it".[14] After Cherry edited parts of the pilot script and pitched it to ABC, network executives were impressed, causing ABC to order 13 episodes.[14][15] Filming for the season started around March 2004 at the Universal Studios Hollywood backlot Colonial Street.[15][16]

Numerous supporting characters have been given expansive and recurring appearances in the progressive storyline, including Doug Savant, who played Tom Scavo and Lynette's husband, who is often away on business. Savant later became a series regular,[29] Shawn Pyfrom as Bree and Rex's rebellious and headstrong son Andrew Van de Kamp.[30] Kathryn Joosten acted as Lynette's neighbor across the street, Mrs. McCluskey and Christine Estabrook as the neighborhood busybody Martha Huber.[17]

The pilot episode, which aired on October 3, 2004, garnered 21.6 million viewers, ranking first in its time slot of 9:00 pm Eastern Time Zone (ET) (8:00 pm Central Time Zone (Americas) [CT]).[31] It was the most-viewed ABC season premiere since 1996's Spin City.[2] After airing three episodes of Desperate Housewives, ABC picked the series up for a full season.[32][33] Overall, the first season averaged 23.7 million viewers for the 23 episodes aired in the U.S.,[4] including the season's largest audience of more than 30 million viewers of the season finale.[34] Of the regular primetime programming that aired during the 2004–2005 American television season, Desperate Housewives ranked 4th out of 156 programs, according to the Nielsen Ratings system.[4]

"As involving as any new drama and funnier than any new sitcom, Housewives matches high visual style with a witty-but-never arch sensibility."

Critical reception was generally favorable. Robert Bianco of USA Today gave the pilot a score of four stars out of four, calling it "[r]efreshingly original, bracingly adult and thoroughly delightful", and going on to say that "[Desperate] Housewives is a brightly colored, darkly comic take on suburban life, sort of Knots Landing meets The Golden Girls by way of Twin Peaks."[19] Tim Goodman of the San Francisco Chronicle thought that Desperate Housewives was "a brilliantly conceived and relentlessly entertaining new drama".[18] Matthew Gilbert of The Boston Globe commented that the series had "marvelous tonal elasticity".[35] Peter Schorn of IGN felt that season one was "blessed with an attractive cast (sing the praises of older women!), sharp writing and a funky vibe of its own" and that "Desperate Housewives was able to take some of the oldest formulas in the book and infuse them with their own subversive twists to whip up a frothy confection of sly wit and dark motives." Schorn gave the season a score of 9 out of 10.[36][37]

Some critics were not as enthusiastic, however. On reviewing the DVD release of the season, Entertainment Weekly's Dalton Ross gave it a B+ grade, selecting the pilot, "Who's That Woman?", "Guilty", "Children Will Listen" and the season finale "One Wonderful Day" as the season's best episodes, and "Suspicious Minds", "Your Fault" and "Love is in the Air" as the season's worst.[38] Heather Havrilesky of Salon.com felt that after a few episodes, "this dark exploration of the lives of women has not only slid quickly into clichés, but the acting feels forced and overplayed, the stories are wildly unrealistic, the direction is stuck in some awkward nowhereland between campy and leaden, and the voice-over is so grating and so peskily imitative of Sex and the City that the whole package is almost unwatchable."[39]

The season was released on DVD by Buena Vista Home Entertainment in the US on September 20, 2005, after it had completed broadcast on television. As well as every episode from the season, the DVD release features bonus material including bloopers, deleted scenes, audio commentary and behind-the-scenes featurettes. It includes all episodes in HD.