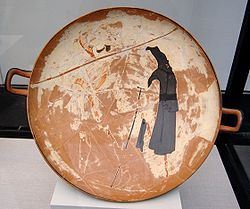 Demophon (Greek: Δημοφῶν / Δημοφόων) was a king of Athens, according to Pindar, son of Theseus and Phaedra, brother of Acamas.[1][2] Some say that Demophon's mother was Iope, daughter of Iphicles.[3] He fought in the Trojan War and was among those who entered the city in the Trojan Horse. The brothers freed their grandmother Aethra, who had been captured by the Dioscuri and served Helen as a handmaid for a while, and brought her home.[4]

Demophon married Phyllis, daughter of Sithon, King of Thrace, while he stopped in Thrace on his journey home from the Trojan war. On the next day after the wedding, however, he had to leave, promising to return and take Phyllis with him as soon as possible. She gave him a casket and told not to open it unless he should lose every hope to return to Thrace. Demophon eventually settled in Cyprus and forgot about Phyllis. She would come to the sea shore every day, expecting to see the sails of his ship, but in vain. After the appointed date was past, she either died of grief or hanged herself. One day Demophon opened the casket out of curiosity; what he saw there was so horrifying that he jumped onto his horse and rode like wild till he fell off the horse on his own sword and died.[5][6][7] Others, however, say that he did return, but Phyllis was already dead by the time; when he embraced the lifeless almond tree into which she was said to have transformed after death, it started to blossom.[8]

Not all sources, however, accepted the tradition of Demophon's death in Cyprus. In Euripides' play Heracleidae, Demophon was the king of Athens, having succeeded to his father's power.[9] He granted the children of Heracles, who were fleeing from Eurystheus, refuge in Athens. As Eurystheus prepared to attack, an oracle told Demophon that he would win if and only if a noble virgin was sacrificed to Persephone. Macaria volunteered for the sacrifice and a spring was named the Macarian spring in her honor. When Diomedes, having landed on the coast of Attica after a storm and failing to recognize the land, started to ravage it, Demophon marched out against the invaders, and was successful enough to take the Palladium from Diomedes. However, he accidentally killed a fellow Athenian in the battle, and was tried in court for that.[10] Demophon had a son Oxyntes.[11]

Lucian[12] relates the story concerning Phyllis not of Demophon, but of his brother Acamas, probably because the character of his work was supposed to be ignorant and to have confounded the two brothers. Tzetzes[13] repeats the mistake. Acamas is better known for having been loved by Laodice, daughter of Priam.[14][15]