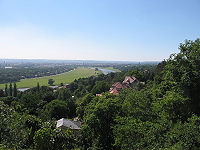 In 2007, Oman's Arabian Oryx Sanctuary was the first site to be removed from UNESCO's World Heritage list.[3] The sanctuary had become a World Heritage Site in 1994. Poaching and habitat degradation had nearly wiped out the Oryx population. The delisting was done in accordance with the wishes of the government that reduced the sanctuary by 90 percent after oil had been found at the site.[4] Only four breeding pairs of oryx were counted at the time of the removal of the designation.[5]

On June 25, 2009 the committee of the UNESCO voted to remove the status of World Heritage Site of the Dresden Elbe Valley on the basis of the Waldschlösschen Bridge that is under construction since 2007 and will bisect the valley.[6] The 20km long site had been selected as a World Heritage Site in 2004. The delisting was preceded by a long and protracted struggle between local Dresden authorities in favor of the bridge and their opponents. A referendum had been conducted in 2005 about building the bridge without informing the voters that the UNESCO designation was at stake.[7] In 2006 the site was placed on the endangered list until 2008, at which time a one-year extension was granted. With construction of the bridge ongoing it was declined to grant a second extension, and at its 2009 meeting in Seville the committee voted 14 to 5 to delist the site. This represents only the second delisting of a World Heritage Site.[8][9] While a majority of local residents polled indicated that Dresden can do without the UNESCO title, the delisting removes supporting funding and has been termed an "embarrassment".[8]