Tackle (American football)
Not to be confused with Tackle (football move).

The positioning of the offensive tackles in a formation. 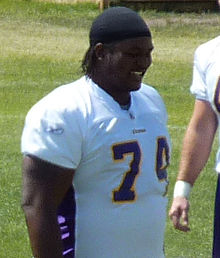 Tackle is a playing position in American and Canadian football. Historically, in the one-platoon system a tackle played on both offense and defense. In the modern system of specialized units, offensive tackle and defensive tackle are separate positions.

The offensive tackle (OT, T) is a position of the offensive line, left and right. Like other offensive linemen, their job is to block: to physically keep defenders away from the offensive player who has the football. The term "tackle" is a vestige of an earlier era of football, in which the same players played both offense and defense.

A tackle is the strong position on the offensive line. They power their blocks with quick steps and maneuverability. The tackles are mostly in charge of the outside protection. If the tight end goes out for a pass, the tackle must cover everyone that his guard doesn’t, plus whoever the tight end isn’t covering. Usually they defend against defensive ends. In the NFL, offensive tackles often measure over 6 ft 4 in (193 cm) and 300 pounds (140 kg).

In the current version of the A-11 offense, offensive tackles are known as "anchors," and have a significantly different role.[1]

According to Sports Illustrated football journalist Paul "Dr. Z" Zimmerman, Offensive Tackles consistently achieve the highest scores, relative to the other positional groups, on the Wonderlic Test, with an average of 26. The Wonderlic is taken before the draft to assess each player's aptitude for learning and problem solving; a score of 26 is estimated to correspond with an IQ of 112.

The right tackle (RT) is usually the team's best run blocker. Most running plays are towards the strong side (the side with the tight end) of the offensive line. Consequently the right tackle will face the defending team's best run stoppers. He must be able to gain traction in his blocks so that the running back can find a hole to run through.

The left tackle (LT) is usually the team's best pass blocker. Of the two tackles, the left tackles will often have better footwork and agility than the right tackle in order to counteract the pass rush of defensive ends. Most quarterbacks are right-handed and in order to throw, they stand with their left shoulders facing down field, closer to the line of scrimmage. Thus, they turn their backs to defenders coming from the left side, creating a vulnerable "blind side" that the left tackle must protect. (Conversely, teams with left-handed quarterbacks tend to have their better pass blockers at right tackle for the same reason.)

A 2006 book by Michael Lewis, The Blind Side: Evolution of a Game, sheds much light on the workings of the left tackle position. The book discusses how the annual salary of left tackles in the NFL skyrocketed in the mid-90's. Premier left tackles are now highly sought after commodities, and are often the second highest paid players on a roster after the quarterback; at least one left tackle is almost always picked with one of the first five positions in the NFL Draft.[2] Recent examples include Trent Williams (2010, 4th overall pick), Jake Long (2008, 1st overall pick), and Joe Thomas (2007, 3rd overall pick).

Not to be confused with Skateboard#Nose guard.

A lone nose tackle in the base 3-4 defensive formation

In order for a 3-4 to be effective, it needs a dominant nose tackle, which is very hard to find. Ted Washington, who in his prime weighed around 350 pounds, is considered the prototypical 3-4 nose tackle of his era. A few examples of nose tackles in the NFL are Vince Wilfork, Casey Hampton, Kelly Gregg, Jay Ratliff, Jamal Williams, Kyle Williams, Antonio Garay, B. J. Raji, Aubrayo Franklin, Sione Pouha, Phil Taylor, and Terrence Cody among others.[4]