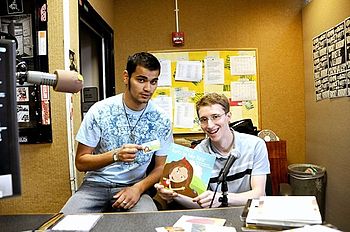 He received his Bachelor's degree in Visual Art from Erskine College in Due West, SC.[1] He developed a lot of his talents while he was at Erskine College.

Describing Morgan as "a very self-motivated student," Walker said he is always looking for opportunities to work outside class in a professional environment. "I advise my students that the more work you do, the better you become at it, and this has been true for Davey," she said. "Talent is wonderful, but it takes work to develop it, and Davey is doing just that."
—Professor Jan Walker, Erskine NetNews, January 11, 2006 [2]

While at Erskine, he developed interests for digital illustration, graphic design and printmaking.

He had a hobby of drawing since he was a child. His passion grew for illustration while in college. He illustrated everything from coloring books to business logos.[3] He illustrated a children's book, entitled Bats in the Air, Bats in My Hair.[1][3] It was published in 2008.[4] Morgan currently resides with his family in Greenville, South Carolina. Morgan has performed readings at elementary schools. He was noted in several newspapers including The Altavista Journal, Greenwood Today, and The Index Journal.[5] Morgan was interviewed about Bats in the Air, Bats in My Hair in March, 2009 on the Captain Rouen show on WUSC-FM 90.5.[6]

He started his career in photography with Covenant Discipleship (a ministry of the ARP Church) as an intern in high school. While attending college he worked as a freelance photographer for The Greenville News and Link (magazine). He also worked as a student worker for the Public Relations department at Erskine College. At Erskine, he developed a passion for photography.[3] He was published in an article along with three of his photographs, the December 6–12 issue of the Link (magazine).[2] In 2008 he received 1st place in the Nikon Moving Moments Photography Contest.[7] He is currently a photographer in the Greenville, SC area.[3] After graduating in 2007 from Erskine College he started his own wedding photography business, Davey Morgan Photography.[3] He is a member of Professional Photographers of America. He now works with his wife, Marissa Morgan, as photographer.[8] His wife Marissa won first place and a $500 purchase award for a trio of photographs in the Student Art Show at Erskine College in 2006.[9] In 2011, Davey won the WeddingWire Bride's Choice Awards '11 for Davey Morgan Photography.[10][11][12]

Morgan receives inspiration from children's literature such as Curious George and Sonic the Hedgehog (comics) . He also draws inspiration from one of his favorite artists Roy Lichtenstein He is also inspired by movies such as Ponyo and Castle in the Sky by the prominent Japanese filmmaker Hayao Miyazaki.[13]

The story is about a childhood experience Martha Hamlett, the author, had when she was a young girl who spent the night at her grandmother's house and bats got in the bedroom that she was sleeping in. The book format is a rhyme-filled picture book.[14][15]