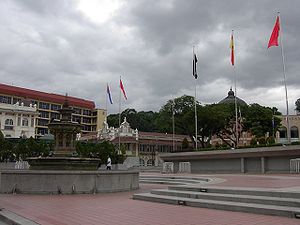 Merdeka Square (or Dataran Merdeka) is located in Kuala Lumpur, Malaysia. It is situated in front of the Sultan Abdul Samad Building. It was here the Union Flag was lowered and the Malayan flag hoisted for the first time at midnight on August 31, 1957. Since then, Merdeka Square has been the usual venue for the annual Merdeka Parade (National Day Parade).

The Sultan Abdul Samad Building, which grandly overlooks the Merdeka Square, is one of the most significant landmarks built by the British. Designed by A. C. Norman who was inspired by Indian Moghul architecture, this building was completed in 1897 and housed the Selangor State Secretariat and later the Supreme Court before being abandoned for a number of years. It now houses the Ministry of Heritage, Culture and Arts.

The field at the Merdeka Square's immediate vicinity was officially renamed 'Dataran Merdeka' on 1 January 1990 in conjunction of Visit Malaysia Year 1990.

Merdeka Square was the starting line of The Amazing Race Asia 1. 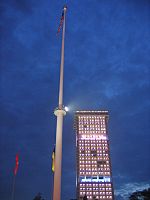 The flagpole at night 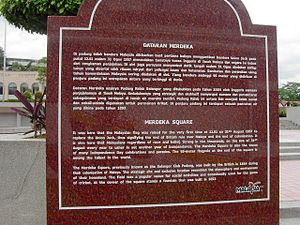 A plaque at Merdeka Square.

Surrounding the square are many buildings of historical interest including the Royal Selangor Club Complex which is situated on one side of the square, the Sultan Abdul Samad Building, the National History Museum (formerly the Chartered Bank Building) and the Memorial Library, a building dating back to 1909, St. Mary's Anglican Cathedral, a Gothic style building which is more than a hundred years old, the original Kuala Lumpur Railway Station (next to the Sultan Abdul Samad Building), the 102-year old Sanitary Board fountain and the impressive modern Dayabumi Complex.

A 95-meter flagpole, one of the tallest in the world, marks that spot with a flat, round black marble plaque. It is located at the southern end of the square.[2]

The quasi-Tudor style timber structure was built in 1890 and remains a place to watch a game of cricket on a Sunday afternoon.

The Royal Selangor Club's Tudor-style building, originally built in 1890 is in stark contrast to the Moghul-styled Sultan Abdul Samad Building across the square.