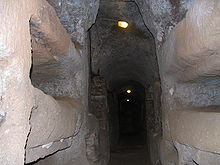 Grave niches in the Catacomb of Callixtus

The Catacomb(s) of Callixtus (also known as the Cemetery of Callixtus) was one of the Catacombs of Rome on the Appian Way, most notable for containing the Crypt of the Popes (Italian: Capella dei Papi), which contained the tombs of several popes from the 2nd to 4th centuries.[1][2] The crypt fell into disuse and decay as the remaining relics were translated from the catacombs to the various churches of Rome; the final wave of translations from the crypt occurred under Pope Sergius II in the 9th century before the Lombard invasion, primarily to San Silvestro in Capite, which unlike the Catacomb was within the Aurelian Walls.[1]

The Catacomb is believed to have been created by future Pope Callixtus I, then a deacon of Rome, under the direction of Pope Zephyrinus, enlarging pre-existing early Christian hypogea. Callixtus himself was entombed in the Catacomb of Calepodius on the Aurelian Way. The Catacomb and Crypt were rediscovered in 1854 by the pioneering Italian archaeologist Giovanni Battista de Rossi.[1] 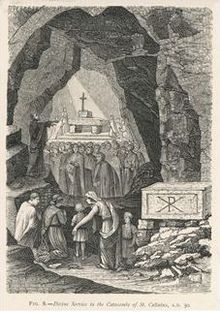 Christians performing service in the catacombs.

At its peak, the fifteen hectare site would have held the remains of sixteen popes and fifty martyrs. Nine of those popes were buried in the Crypt of the Popes itself, to which Pope Damasus I built a staircase in the 4th century. Among the discovered Greek language inscriptions are those associated with: Pope Pontian, Pope Anterus, Pope Fabian, Pope Lucius I, and Pope Eutychian. A more lengthy inscription to Pope Sixtus II by Furius Dionisius Filocalus has also been discovered.

Outside the Crypt of the Popes, the region of Saints Gaius and Eusebius is so named for the facing tombs of Pope Gaius ("Caius") and Pope Eusebius (translated from Sicily). In another region, there is a tomb attributed to Pope Cornelius, bearing the inscription "CORNELIVS MARTYR", also attributed to Filocalus.[3]