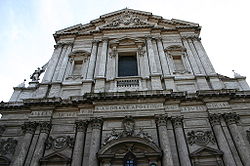 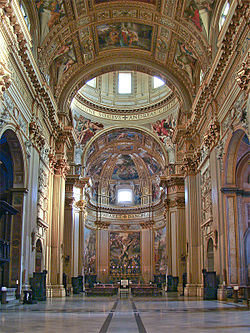 Interior of the church.

Sant'Andrea della Valle is a basilica church in Rome, Italy, in the rione of Sant'Eustachio. The basilica is the general seat for the religious order of the Theatines.

It was initially planned when Donna Costanza Piccolomini d'Aragona, duchess of Amalfi and descendant of the family of Pope Pius II,[1] bequeathed her palace and the adjacent church of San Sebastiano in central Rome to the Theatine order for construction of a new church. Since Amalfi's patron was Saint Andrew, the church was planned in his honor. Work initially started around 1590 under the designs of Giacomo della Porta and Pier Paolo Olivieri, and under the patronage of Cardinal Gesualdo. With the prior patron's death, direction of the church passed to Cardinal Alessandro Peretti di Montalto, nephew of Sixtus V. By 1608, and banked by the then enormous endowment of over 150 thousand gold scudi, work restarted anew with a more grandiose plan, mainly by Carlo Maderno. The interior structure of the church was finally completed by 1650, with additional touches added by Francesco Grimaldi.

The fresco decoration of Sant'Andrea's dome was one of the largest commissions of its day. The work was disputed by two Carracci pupils, Giovanni Lanfranco and Domenichino. In 1608, Lanfranco had been chosen by Cardinal Alessandro, but the Ludovisi papacy of Pope Gregory XV favored the Bolognese Domenichino. In the end, both artists were employed, and Lanfranco's lavish dome decoration (completed 1627) set the model for such decorations for the following decades.[2] This dome was for a long time the third largest dome in Rome (only preceded by the Basilica of St. Peter and the Pantheon). 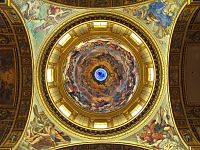 Windows on the ceiling, allowing natural light to illuminate the interior

Chapels on the right side

The Ginetti Chapel, first on the right, was designed by Carlo Fontana in 1670, while the sculptural relief in white marble depicting Angel Urges Sacred Family to Flee to Egypt (1675) is the work of Antonio Raggi. He sculpted the angel in the style of Bernini, his teacher. In this chapel are buried Cardinal Marzio Ginetti (died 1671) and his nephew, who was also a Cardinal, Giovanni Francesco Ginetti (died 1691).

The second Strozzi Chapel has a Pietà, Leah and Rachel (1616), copies in bronze by Gregorio De Rossi from originals by Michelangelo. The chapel was propbably designed by Michelangelo, but executed by Leone Strozzi (1555–1632). Beneath the statues of Leah and Rachel are two bronze bas-reliefs representing "The deposition from the Cross" and "The descent into Limbo". The cenotaphs in black marble in the side walls were erected for the Strozzi family: Cardinal Lorenzo (died 1571), Leone (died 1554), Pietro (died 1558), Roberto Strozzi (died 1566) and Maddalena Medici.

The chapel of "Our Lady of the Sacred Heart" (1887–1889) was designed by Aristide Leonori. The painting of the Madonna is by Silverio Capparoni and was blessed by Pope Pius IX.

In the right transept is the Chapel of St. Andrew Avellino with Death of the Saint (1625) by Giovanni Lanfranco, who also frescoed the impressive Glory of Paradise (1625–28) in the cupola, with figures of the evangelists in the spandrels (1621–1628) by his rival, Domenichino.

In the corner of the right transept are situated two chapels. The chapel of the Crucifix (1647) displays an antique wooden crucifix above a painting of the Madonna inside a radiant halo. On the right side is the tomb of the Theatine Cardinal Saint Giuseppe Maria Tomasi. The "oratory of the Divine Love" dates from 1751.

Chapels on the left side

The Chapel of the Madonna della Purità was originally dedicated to the Holy Family. In 1647 it was designated to the Madonna, patroness of the Theatines. The altar was consecrated in 1725 and shows beneath the tomb of the martyr Saint Fortunatus. The four lunettes on the arches were painted by Silvio Galimberti in 1912. The painting "Madonna della Purità" above the altar is a copy from 1647 by the Neapolitan painter Alessandro Francesi from the original that was painted in 1641 by the Spanish painter Luis de Morales "Il Divino" (situated in the Neapolitan church San Paolo Maggiore). It was adorned with a golden radiant halo in gratitude for having saved the city from famine. On the left wall of the chapel is the tomb of cardinal Stoppani (died 1774).

The left transept is dedicated to Saint Cajetan, founder of the Theatines. The altarpiece, depicting the saint adoring the Madonna and Child, was painted in 1770 by Mattia de Mare, while the altar dates from 1912 by Cesare Bazzani. The frescoes on the side walls were painted by Alessio D'Elia in 1770. In front of the altar stand statues of Abundance and Wisdom by Giulio Tadolini.

Over the entrance to the left circular chapel is the tomb of Pope Pius II (1475), completed by a follower of Andrea Bregno in 1615.

The third chapel on the left is dedicated to Saint Sebastian and was decorated with paintings by Martinucci in 1869. The altarpiece "Saint Sebastian" was painted by Giovanni de' Vecchi in 1614.

The chapel "Rucellai o Dei Beati" was designed in 1610 by Matteo Castelli de Melide, a relative of the Borromini family. The altarpiece, attributed to the Sicilian painter Francesco Manno (1754–1831), depict three Blessed Theatines : Marinoni, Burali D'Arezzo and Tomasi. On the right wall is a painting by Cristoforo Roncalli (Pomarancio) of "the archangel Gabriel in the presence of the Eternal Father". Pomarancio also painted "the Archangel Raphael and Tobias the elder" on the left wall and the fresco in the cupola "Glory of music making angels". The other paintings are by Ambrogio Buonvicino and depict "angels in glory". In the left wall is the sepulchral monument in black marble of Orazio Rucellai (1604–1673) and the tomb of Giovanni della Casa, author of Il Galateo. The right wall houses the tomb of Annibale Rucellai (died in 1601), bishop of Carcassonne, France.

The last chapel on the left is the Chapel Barberini, commissioned by Cardinal Maffeo Barberini (who became later Pope Urban VIII) to Matteo Castelli di Melide in 1616. The altarpiece Assumption (between four Corinthian columns in antique rose marble) and the paintings "Visitation" and Lucia collects the body of St Sebastian are by Domenico Cresti ( Passignano). The sculptural program, too, is fascinating: on the left, in the furthest niche resides Pietro Bernini's "Saint John the Baptist" (1616), and in the closest niche on the right is Francesco Mochi's Saint Martha (1629), which is significantly larger than the other three sculptures, with Saint Martha seeming to want to leave her niche.

The apse decoration is by Alessandro Algardi. In the apse half-dome the History of Sant'Andrea and Virtues are frescoed by Domenichino. In the apse walls are three frescoes Crucifixion, Martyrdom and burial of Sant'Andrea by Mattia Preti (1650–1651), as commissioned by Donna Olimpia, sister in law of Pope Innocent X.

Vault over the nave.

The Baroque facade was added between 1655 and 1663 by Carlo Rainaldi, at the expense of Cardinal Francesco Peretti di Montalto, nephew of Alessandro.

The church houses the cenotaphs of Popes Pius II and Pius III, who are buried in the church.[3] 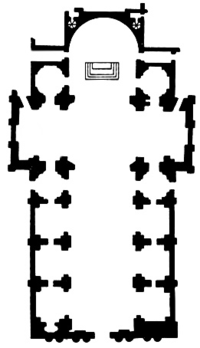 Plan of the basilica.

The first act of the opera Tosca by Puccini is set in Sant'Andrea della Valle. However, the Cappella Attavanti used was a poetic invention.

Sant'Andrea della Valle later became a model for the construction of other churches like the St.Kajetan church in Munich and the Church of St. Anne, Kraków.

On the square in front of the church stands the fountain of Carlo Maderno, which until 1937 was situated in the now destroyed Piazza Scossacavalli in the Borgo.