The birds of Cornwall are in general a selection of those found in the whole of the British Isles, though Cornwall's position at the extreme south-west of Great Britain results in many occasional migrants. The nightingale is one common English bird which is virtually absent from Cornwall. 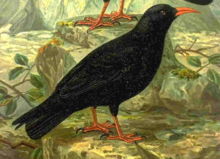 The sea cliffs host many marine bird species with the Cornish Chough recently returning to the county after a long absence. This rare bird holds the honour of appearing on the Cornish coat of arms and being the county animal of Cornwall.

The tidal estuaries along the coasts contain large numbers of wading birds, while marshland bird species frequently settle in the bogs and mires inland. Bodmin Moor is a breeding ground for species such as lapwing, snipe and curlew. On and around the rivers, sand martins and kingfishers are often seen. 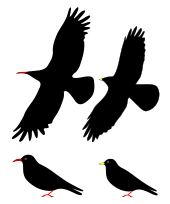 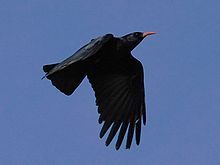 The birds of the coast at Tintagel are well worth observing: in 1935 an anonymous writer mentions Willapark as the scene of spectacular flocks of seabirds (eight species); inland he describes the crows (including the Cornish chough and the raven) and falcons which frequent the district.[3] (by the 1950s there were no longer choughs to be seen). This bird is emblematic of Cornwall and is also said to embody the spirit of King Arthur. B. H. Ryves mentions the razorbill as numerous at Tintagel (perhaps the largest colony in the county) and summarises reports from earlier in the century.[4] In 1991 a local bird keeper, Jon Hadwick, published Owl Light about his experiences keeping ten owls and a buzzard.[5][6] In the early days of the Royal Society for the Protection of Birds Charles Hambly (also known for saving shipwrecked sailors) was a correspondent for the Society. A hundred years later Harry Sandercock observed that even modern agricultural changes had not reduced the bird populations.[7]

The coastline near Polzeath is a particularly good area for seeing many types of coastal birds including puffins and Peregrine falcons. In Cornish dialect these falcons are known as "winnards", as in the crossroads Winnard's Perch, or the expression "shrammed as a winnard".

With the large areas of salt marsh on the estuary, the River Camel provides an excellent location for birds. Large flocks of waders can be seen in winter, preyed on by local Peregrines, and a migrant Osprey often pauses a few days to fish in Spring and Autumn.[8] Mute Swans nest at several locations, particularly near to the bridge in Wadebridge where there is often a nest on a small island a few yards downstream of the bridge. Ducks are also found on the river with Shelduck, Shoveller and Mallard on the estuary and Teal further upstream.[9]

The Camel estuary was one of the first places in England to be colonised by Little Egrets, the birds being particularly seen on mudflats at low tide. Other rarities include an American Belted kingfisher seen in the 1980s for only the second time in England.

Upstream on the River Camel, and on several of its tributaries, Kingfishers can be seen,[9] while the Cornwall Wildlife Trust reserve at Hawkes Wood is noted for Nuthatches and Tawney Owls.[10]

There are two birdwatching hides on the River Camel. Tregunna Hide (Grid reference SW 969 738) is owned by Cornwall County Council and is located on the Camel Trail[11] and is open to the public. Burniere Hide (Grid Reference SW 982 740) is owned by the Cornwall Birdwatching and Preservation Society (CBWPS)[11] and is only open to members. In addition, the CBWPS own the Walmsley Sanctuary which covers over 20 hectares (49 acres) on the River Amble, a tributary of the River Camel, with a further 2 hides for use by its members. The sanctuary is nationally important for wintering waders and wildfowl.[9]

Gwennap Head is renowned for its relative abundance of passing marine bird species such as Manx and sooty shearwaters, skuas, petrels and whimbrels. In addition, a colony of breeding gannets are close by. Therefore the headland is favoured by birdwatchers and many travel the length and breadth of Britain to track rare seabirds. Annually, the Seawatch SW survey aims to record the numbers of such species from a designated location close to the cliff edge on Gwennap Head.

Because of the Gulf Stream, Scilly has a particularly mild climate - residents can grow sub-tropical plants there. Scilly is the first landing for many migrant birds, including extreme rarities from North America and Siberia. Scilly is situated far into the Atlantic Ocean, so many North American vagrant birds will make first European landfall in the archipelago.

Scilly is responsible for many firsts for Britain, and is particularly good at producing vagrant American passerines. If an extremely rare bird turns up, the island sees a significant increase in numbers of visiting birders.