Compact Disco is a Hungarian electronic rock band and musical producer quartet based in Budapest, founded in 2008 by three musicians of varying musical backgrounds.

The beginnings and early events

Lotfi, Pál and Walkó first met in 2005, when Behnam Lotfi's techno producer duo, Collins and Behnam planned to produce a cover version of Adamski and Seal's Killer and was in search of a vocalist. He saw Csaba Walkó in an American Idol type talent show[1] and asked him to sing the vocals for the cover. Walkó that time was singing in a funk-pop band called Brownfield and asked a couple of members of this band to accompany him to the recording session. One of these members were Gábor Pál, who was also the leader and founder of the renown Hungarian nu-jazz ensemble, Toy Division. This was the first time when the three musicians met.

But it was not until the summer of 2008, when Lotfi pitched the idea of a band playing electronic vocal pop music to Walkó, who asked his keyboardist, Pál to join them. They had their first meeting in August 2008, and they instantly started to produce their first song (later to be titled Fly or Dive).

They were composing and producing songs until March 2009. By this time everything was recorded, except the vocal tracks. The band started the studio sessions to finalize its yet unnamed first album in April 2009, recording the vocals, and mixing and mastering the complete recording. They were in Gábor Némethy's (aka. Collins, also a member of Collins & Behnam) Groovejack Studio until July 2009.

After album was finished - and by this time the band has finally agreed on the Compact Disco name, and the album title Stereoid - Hungarian independent record label, CLS Music (then called CLS Records) showed interest in releasing it, and in September 2009 they agreed upon the details and the album was released in December.

Stereoid and the expansion of the band

The band started to perform live in January 2010, mostly in Hungary, but also in Transylvania, Romania. Their first video for the song I'm in Love gained considerable popularity, and it reached at least top ten position in various Hungarian dance charts. The video was shot shortly before the release of the first album in November 2009. It was produced by Hungarian independent video and commercial maker group, Studio X.

Shortly after the Stereoid's release, Compact Disco has been nominated to the 2010 Fonogram Awards in the category "Best Performance in Electronic Music" [2]

In May 2010, the group shot its second video to the second single "Without You" again with Studio X behind the scenes. Although "I'm in Love"'s video gained popularity over time, the Hungarian audience failed to recognize the fresh faces believing it was the work of a foreign band.[3] Therefore they decided on a so-called "image video" picturing only the band.[4]

In the same month, another nomination came along, Bravo magazine nominated the band to its Hungarian 2010 Otto Awards in the category "Best New Artist",[5] and the band was to do and acoustic show in the "Akusztik" series on Magyar Rádió's pop music channel, MR2 Petőfi. The session was recorded before live audience in Magyar Rádió's Studio 8 and was aired in September creating demand for more "Akusztik-type" shows.[6]

During the summer festival season, Compact Disco made an appearance at almost all major Hungarian music festivals, and has been asked to cover Ákos in the Hungarian MTV Icon series.[7] For these, they asked Pál and Walkó's former band mate from Brownfield, bassist Attila Sándor to join the band on stage, and in November 2010 he became the fourth member of Compact Disco. Occasionally a drummer was also performing the band in selected venues.[8] Also in November 2010, on Red Bull's request they shot their third video to their song "Fly or Dive", once again with Studio X.[9]

The band was also asked to remix songs for several Hungarian artist, including folk-pop band, Holdviola's "Erdő, erdő" and their hit "Bánat utca" which became a club sensation, and for popular Hungarian solo artist, Ákos's second single, "A fénybe nézz" from his 2010 album.[14]

In November 2010, after four weeks of voting, the band won the popular award MTV brand:new on November 15[15] with the help of their own viral video series "Segíts Antosnak" (Hungarian: "Help Antos!"), which was praised by the PR-community.[16] On December 6, 2010 the band re-released its debut album, Stereoid as a free digital download.[17] 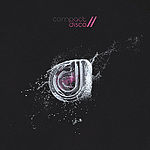 In December 2010, the band started working on their second album, titled II.[18] It was recorded in Compact Disco's home studio, except for the vocals which was recorded again in Groovejack Studio in April 2011 and mixed and mastered by Gábor Deutsch of Anorganik-fame in Berlin. The album was is expected to be released on May 14, 2011.[19][20][21] The first single of the track is Feel The Rain, which peaked at #2 on MR2 Petőfi Rádió's Top 30.[22] From this point, the band's logo was redesigned to fit in with the new albums cover. The cover was designed by Sándor.

Before the album's release, as a sign signs of growing popularity in Hungary, the band was nominated for several awards, and won some of it. In January 2011 Compact Disco was nominated in three categories ("Best Performance in Electronic Music", "Best New Artist", "Best Song") for the 2011 Fonogram Awards. The band won the 2011 Fonogram Award for "Best Performance in Electronic Music"[23] on March 2, 2011. On April 24 Compact Disco won the 2011 Antropos.hu Award for "Album of the Year 2010" after a four-month-long popular voting period.[24] Also in April 2011 the band was nominated for VIVA Hungary's Comet award for 'Band of the Year 2010'.[25]

Age Media signed the first three singles from "Stereoid" to release it worldwide,[26] so did Universal Music for Romania and Bulgaria sometime in 2011.

In May 2011, Red Bull Hungary organized a special event to celebrate the bicentennial of the famous Hungarian composer and virtuoso, Franz Liszt's birth, called Liszt Remix. For this, four Hungarian bands were asked to rethink, remix and incorporate some of Liszt's oevre into their three or four piece performance. Compact Disco chose the Hungarian Rhapsody No. 2, which was made into an uptempo drum and bass piece and Liebestraum No. 3, which was incorporated into their song, Feel The Rain as an intro. As a bonus, they rearranged their second single from Stereoid, Withou You into a classical orchestration, and this was recorded as well upon MR2 Petőfi Rádió's request to be played on air, and this song received heavy airplay.[27][28][29][30]