Colonia Claudia Ara Agrippinensium was the name of the Roman colony in the Rhineland out of which the German city of Cologne developed.

It was the capital of the Roman province of Germania Inferior and the headquarters of the military in the region. With the administrative reforms under Diocletian, it became the capital of Germania Secunda. Many artifacts from the ancient city survive including the arch of the former city gate with the inscription 'CCAA' which is today housed in the Romano-Germanic Museum. 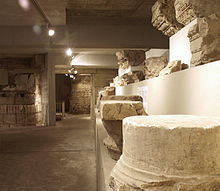 A Germanic tribe known as the Eburones had originally inhabited the present-day Cologne Lowland. But they were wiped out in a war of reprisal carried out by Gaius Iulius Caesar. In 38BC, the Germanic tribe known as the Ubii who inhabited the right bank of the Rhine were resettled to the lands in the Cologne Lowland vacated by the Eburones by the Roman General Marcus Vispanius Agrippa. This brought the Ubii within Roman-occupied territory.

The Ubii chose an island in the Rhine as the central location of their settlement area. The island was a natural rise that was protected from flooding. The location of the settlement no longer exists today but it roughly comprises the area between the areas of the Heumarkt and the Alter Markt sections of the old city of Cologne. The settlement can be dated by archeological finds to the first half of the 1st century AD. By this time the typical Roman grid-style street plan was already in use. The settlement’s assumed name is probably Oppidum Ubiorum (Settlement of the Ubii). The Roman epoch of the history of the city of Cologne begins with this oppidum.

During the rule of Augustus (30BC to 14AD), the Ara Ubiorum (Altar of the Ubii) was constructed within the city limits. This altar was possibly foreseen as the central place of worship for a greater Germanic province which would comprise lands across the Rhine which remained unconquered at this point. The noble Segimundus is mentioned as the priest of the Ara in the year 9AD. He was from the family of Arminius, leader of the Cherusci. After Arminius' defeat of Publius Quinctilius Varus in the same year at the Battle of the Teutoburg Forest the plans for a greater German province were largely set aside. However, the altar itself retained some of its importance as the city is mentioned as “Ara Ubiorum” in many inscriptions.

Between 9 and 30AD the area of present-day Cologne was mainly a garrison. Legion I Germanica and the Legion XX Valeria Victrix were stationed nearby. The place of the initial Roman Castra was known as Apud Aram Ubiorum (At the Altar of the Ubii).

The headquarters of Germanicus were located in Cologne from 13AD to 17AD when he was recalled by Tiberius. After the Battle of the Teutoburg Forest, Germanicus made efforts to stabilize the border region and to plan and carry out new offensives against the Germanic tribes located on the right bank of the Rhine. With the death of Augustus in 14AD the legions garrisoned in Cologne mutinied with the aim of establishing Germanicus as emperor. These legions probably united in mutiny with those from Vetera stationed at their summer garrison in Castrum Novasium. Germanicus however remained loyal to Tiberius who was heir to the throne. He impeded the legions from declaring him emperor and at the same time placated the mutinying legions through generous concessions.

Reconstructed plan of the Roman city of Cologne (after 50 AD) 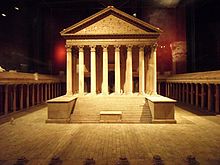 Agrippina the younger was born in 15AD in Cologne. She was the daughter of Germanicus and the wife of the Roman Emperor Claudius. She succeeded in convincing Claudius to elevate her birthplace to Colonia Claudia Ara Agrippinensium (Colony of Claudius and Altar of the Agrippiner). This gave Colonia the status of 'city' under Roman law and a Roman colony had many more imperial rights than an oppidum. At this time the city had some 30,000 inhabitants and became the administrative capital of Germania Inferior. Before this time it was not a province, but an occupied area controlled and administrated by the military (exercitus Germaniae inferioris).

Until 70AD the city had a strong city wall that was ca. 8 meters in height and 2.5 meters wide. However, the remains of the Roman city wall that can still be seen today are from the 3rd century AD. The unwalled portions of the city were equal to a square kilometer. Its most important steles and grave goods are preserved in the Romano-Germanic Museum.

The year of four emperors and Batavian revolt

In 68 AD, the death of Emperor Nero caused a succession crisis in Rome. This led to a civil war throughout the empire. The Roman Senate installed Servius Sulpicius Galba as emperor, but he was quickly murdered by another contender for the throne Marcus Salvius Otho who had the backing of the Praetorian Guard. Meanwhile the legions stationed in Colonia called for their commander Aulus Vitellius to be crowned as emperor. Vitellius marched on Italy at the head of the better part of the Rhine legions. He defeated Otho’s troops at the First Battle of Bedriacum in which Otho himself was killed.

Vitellius was overthrown eight months later by Titus Flavius Vespasianus whose troops feared reprisals for having previously recognized Otho as emperor. Vitellius was killed and his body thrown into the Tiber.

Capital of the province Germania Inferior

With the founding of the province Germania Inferior under Domitian in 89 AD, the commander of the Legions of Lower Germania Colonia became the provincial governor. The seat of the provincial governor was located in Colonia. In 80 AD water supply was built, the Eifel Aqueduct, one of the longest aqueducts of the Roman Empire, which delivered 20,000 cubic metres of water to the city every day. Ten years later, the colonia became the capital of the Roman province of Lower Germany Germania Inferior with a total population of 45,000 people. The Rhine fleet was stationed south of the city at Alteburg. The fortress itself was destroyed in attacks by the Franks in 276 AD. This area was later named Alte Burg from which come the present day names "Akteburger Wall" and "Alteburger Platz".

With the elevation to provincial capital, Colonia was no longer a military base. The legions of the province were stationed in Vetera II near Colonia Ulpia Traina (near present-day Xanten), Novaesium and Bonna. The name of the city varied usage over time. In the 4th century AD it was known as Colonia Agrippina, it was shortened to "Colonia" sometime after the 5th century.

Late antiquity and the end of Roman rule

In 260 AD Postumus made Cologne the capital of the Gallic Empire which included the German and Gallic provinces, Britannia and the provinces of Hispania. The Gallic Empire lasted only fourteen years. By the 3rd century, only 20,000 people lived in and around the town. In 310 AD, Emperor Constantine I had a bridge over the Rhine constructed; this was guarded by the castellum Divitia (nowadays "Deutz"). In 321 AD Jews are documented in Cologne. When exactly the first Jews arrived in the Rhineland area can not be established anymore and the Cologne community claims to be the oldest north of the Alps.

Colonia was pillaged several times by the Franks in the 4th century and the city finally fell to the Ripuarian Franks in 459 AD. Two lavish burial sites located near the Cathedral date from this time of late antiquity.