To make climbing as safe as possible, most climbers use protection, a term used to describe the equipment used to prevent injury to themselves and others.[1]

There are a number of ways to "protect" a climb, varying according to the type of climbing:

Lead climbing is the climbing system in which the lead climber places protection (temporary or permanent anchors) in the rock establishing the climbing route. The rope is clipped through carabiners (often made especially for lead climbing called quick draws) which are in turn connected to the protection. The belayer pays out rope during the ascent, and manually arrests the climber's fall by locking the rope.

Bouldering is climbing routes that are generally horizontal in nature, without rope. As these routes are low to the ground, other types of safety equipment are appropriate:

Although free solo climbing is done without any protective gear, solo climbers do sometimes use protection. A climber may place a piece of protection and clip into it with a short tether for safety during a difficult move, then remove the protection and continue the ascent. There are also pieces of equipment such as a Silent Partner which fill the role of a belayer, allowing a lead climber to climb without a partner. 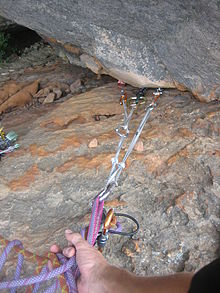 A climbing anchor, incorporating a hex, and two cams, linked and equalized with slings and carabiners.

In-situ protection usually consists of bolts (along with a metal hanger, chain, or ring) or fixed pitons. Sometimes there are in-situ slings, or nuts/SLCDs that have been irretrievably jammed in the rock. Anything else that is left in-situ has a tendency to get 'cleaned' (collected) by climbers.

There are two major standards for climbing equipment safety and reliability worldwide:

In recent years, the CEN has become an important standards organization, mainly in Europe since any products sold in Europe must by law be third-party certified to the relevant standards.[citation needed] There is no such requirement in most other countries, although most manufacturers voluntarily follow UIAA or CEN standards (much like electrical equipment in the US is almost always privately certified by Underwriters Laboratories).

In Europe, equipment used by climbers has to meet the requirements of the Personal and Protective Equipment (PPE) Directive. Essentially, the equipment must be manufactured using a carefully controlled process and samples must meet various tests. Equipment meeting the regulations is marked with the CE Mark. Various standards are used when specifying how equipment should be tested:

There are many more. Most of them appearing in ICS code 97.220.40 and having "Mountaineering" in the title.

Safety is a very important area of work for the UIAA, as it is for all climbers and mountaineers. In response to the need for safety, the UIAA has developed the UIAA Safety Label. In the mid-nineties, CEN adopted the UIAA Safety Standards. Both commissions in CEN and UIAA share similar members. However, since a CE mark is mandatory in Europe, CEN label has grown to become popular amongst the manufacturers of mountaineering and climbing equipment. However, many climbers do not use protection in their climbing activities. This is highly risky, as falling off could result in serious injury or death. Although some critics claim climbing protection dulls the sensation of climbing, it prevents serious injury or death. Europe still holds more than 50% of the equipment market thus keeping the manufacturers interested in CE.

The UIAA Label is truly the only worldwide label for safety on mountain equipment as it brings together manufacturers from all over the world to have a say in the future standards for climbing equipment. The latest Safety Commission meeting was held in September 2008 in Prague, Czech Republic. Many benefits of the UIAA Safety Label over CEN:

a. UIAA made the first standards which were then adopted by CEN
b. Worldwide acceptance of Standards, especially in the US market,
c. Quick implementation of new standards for products to be brought out in the market
d. Participation in annual commission meetings open to stakeholders who are associated safety - including test labs, individuals and prospective label holders

Finally, UIAA Safety Label is "Designed for climbers, by climbers".