Rock climbing style refers to the method by which vertical progress can be made in rock climbing. Each climbing style can be considered a sort of game with rules or standard commonly referred to as climbing ethic. These ethics are some of climbing's social mores.[1]

The term "style" is used by climbers to describe more than one set of distinctions. Ethics, class, techniques, and goals all can be talked about in terms of "style", and both the usage of the term "style" and the usage of stylistic terms themselves can vary quite greatly by geography.

What "style" is not

Certain categories of climbing associated with techniques, classes, grades and locations are not generally regarded as matters of "style".

Similarly speed climbing is not a true style since it is mostly a compilation of other styles. Speed climbing does however contain some techniques unique to speed climbing, and the ethics or sportsmanship of speed climbing can be talked about in terms of "style". 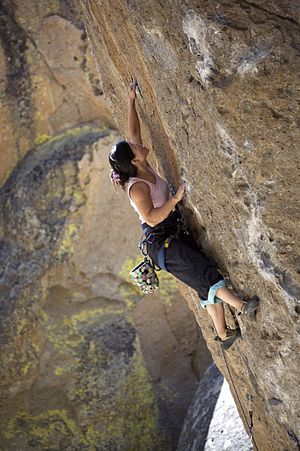 Free climbing can be subdivided into traditional climbing and sport climbing. 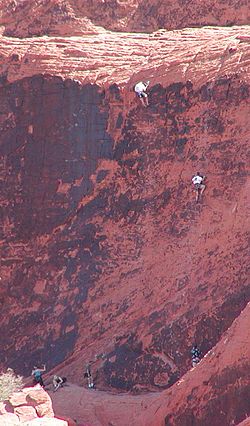 Aid climbing involves using artificial devices placed in the rock to support all or part of the climber's body weight, and is normally practiced on rock formations that lack the necessary natural features suitable for free climbing.