The Church Rock Uranium Mill Spill occurred in New Mexico, USA, in 1979 when United Nuclear Corporation's Church Rock uranium mill tailings disposal pond breached its dam. Over 1,000 tons of radioactive mill waste and millions of gallons of mine effluent flowed into the Puerco River, and contaminants traveled 80 miles (130 km) downstream to Navajo County, Arizona. Local residents used river water for irrigation and livestock and were not immediately aware of the toxic danger.

In terms of the amount of radiation released, the accident was comparable in magnitude to the Three Mile Island accident of the same year. It has been reported as the largest radioactive accident in U.S. history, but the governor refused the Navajo Nation's request that the site be declared a federal disaster area. The event received less media coverage than that of Three Mile Island, likely because it occurred in a lightly populated, rural area; some scholars suggest there were class and racial aspects to the neglect as well, since it affected primarily poor Native Americans.

In 2003 the Churchrock Chapter of the Navajo Nation began the Church Rock Uranium Monitoring Project to assess environmental impacts of abandoned uranium mines; it found significant radiation from both natural and mining sources in the area.[1]

On July 16, 1979, United Nuclear Corporation's Church Rock uranium mill tailings disposal pond breached its dam, and 1100 tons of radioactive mill waste and approximately 93 million US gallons (350,000 m3) of mine effluent flowed into the Puerco River.[2][3] The contaminated water from the Church Rock spill traveled 80 miles (130 km) downstream, through Gallup, New Mexico and reaching as far as Navajo County, Arizona. The flood backed up sewers, affected nearby aquifers and left stagnating, contaminated pools on the riverside.[3][4][5]

The Army Corps of Engineers concluded in its report to Governor Roth of New Mexico that the principal cause of failure was differential settlement of the foundation beneath the dam wall, with resultant formation of cracks by which acidic tailings fluid penetrated the embankment. Variation of features of dam wall construction from approved designs, plus critical variations in tailings pond operation procedures from those approved, contributed to the dam wall failure.[6]

Cracks were first noted in the dam wall in December 1977, which were sealed with bentonite in February 1978. Further cracking was noted in October 1978. Neither the facility owner, nor the State Engineer were formally notified of the episodes of cracking prior to the dam failure.[6]

In terms of the amount of radiation released, the accident was larger in magnitude than the Three Mile Island accident of the same year.[3] It has been reported as "the largest radioactive accident in U.S. history".[4] Shortly after the breach, below the dam radiation levels of river water were 7000 times that of the allowable level of drinking water.[7] In all, 46 curies of transuranic elements and heavy metals were released [8] The Navajo Nation asked the governor to request disaster assistance from the US government and have the site declared a disaster area, but the governor refused. This limited the disaster relief assistance to the Navajo Nation.[3]

Although steps were taken at the time of the accident to notify the public in accordance with a state contingency plan,[3] local residents were not immediately aware of the toxic danger. They were accustomed to using the riverside for recreation and herb gathering, and children often waded in the river. Residents who had waded in the water went to the hospital complaining of burning feet and were diagnosed with heat stroke. Livestock were found dying.[4] Prior to the accident, local residents used river water for irrigation and livestock. In 1981, the state and federal government ended the assistance of trucked-in water which they had provided. Farmers had little choice but to resume use of the river.[9]

For some types of cancers, since the 1950s studies have shown that the Navajo have had significantly higher rates than the national average, generally associated with contamination from the uranium mines and exposure of workers.[10] No ongoing epidemiological studies have been done at Church Rock.[3][11]

In their article in the American Journal of Public Health in 2007, Doug Brugge, Jamie L. deLemos, and Cat Bui proposed that the lack of peer-reviewed studies of health effects of the accident, compared to well-studied events such as Three Mile Island, may be related to such factors as it occurring in an "early stage in the nuclear cycle" (mining, milling and processing), which was dependent on a large labor force, and it happened in a "low-income, rural, American Indian communities", rather than near highly populated areas.[3] 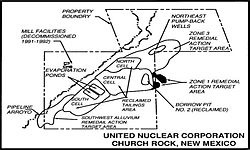 EPA 2003 map of remedial efforts at the United Nuclear Corporation site. The 1979 spill resulted from a breach of the South Cell dam.[2]

Clean up was performed according to state and federal criteria.[2] About 3,500 barrels (560 m3) of waste materials were retrieved (estimated at only 1%).[3] But, according to Paul Robinson, "very little of the spilled liquid was pumped out of the water supply".[4] The Navajo Nation appealed to the governor to request that the president declare the site a federal disaster area, but he refused, which reduced the aid available to people on the reservation.[3] The uranium mill site closed in 1982, related to the declining uranium market.

In 1983 the site was entered on the National Priorities List of the Environmental Protection Agency's Superfund investigations and clean up efforts, as radionuclides and chemical constituents were recognized as entering local ground water.[2] In 1994 the EPA extended its efforts with a study of all known uranium mines on the Navajo Nation.[12][13]

In 2003 the Churchrock Chapter of the Navajo Nation began the Church Rock Uranium Monitoring Project to assess environmental impacts of abandoned uranium mines, and build capacity to conduct community-based research with policy implications.[1] Its May 2007 report found that significant radiation remaining in the area, from both natural and mining sources.[1]

In 2008, the US Congress authorized a five-year plan for cleanup of contaminated uranium sites on the Navajo reservation.[14] The non-profit Groundswell Educational Films is hosting online Webivideos of the clean-up effort.