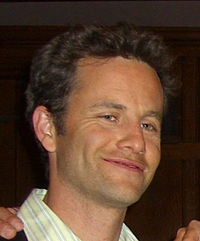 "Secular" studio productions of films with strong Christian messages or Biblical stories, like Ben-Hur, The Ten Commandments, The Chronicles of Narnia: The Lion, the Witch and the Wardrobe, and The Book of Eli,[1] are not part of the Christian film industry per se, and operates with larger budgets and is distributed to a worldwide audience.

Films of the Christian film industry are produced by openly Christians in independent companies mainly targeting a Christian audience. This has been on the rise since the success of Sherwood Pictures' Fireproof, the highest grossing independent film of 2008.[2] 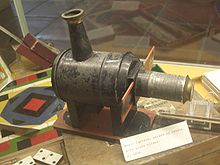 Magic lantern at the Wymondham Museum.

Before the invention of the movie projector, European audiences gathered in darkened rooms to watch magic lantern presentations. Catholic priest Athanasius Kircher promoted the magic lantern by publishing the book Ars Magna Lucis et Umbrae in 1680.[3] Controversy soon followed as priests and masons used the lanterns "to persuade followers of their ability to control both the forces of darkness and enlightenment" and temperance groups used the lanterns to fight alcoholism.[4] In the 1800s, missionaries such as David Livingston used the lanterns to present the Gospel in Africa.[5] After movie theaters emerged, magic lanterns lost their popularity and disappeared from the public.

Throughout the late 19th and into the 20th century, there was much dispute among Christians as to "Christian film". Many thought motion picture was creating a graven image, and shunned having anything to do with the film industry. Through the years, however, many Christians began to utilize motion picture for their own purposes.[6] Herbert Booth, as part of the Salvation Army, claimed to be the first user of film for the cause of Christianity, in 1899.[6]

In 1949 Ken Anderson, editor for a Youth for Christ magazine, decided to form a small Christian film studio. An old shut-down dancehall was purchased and moved onto some donated land to become the first home for Gospel Films, which grew into the largest Christian film distributor. Seeing the potential of Christian films, the Billy Graham Evangelistic Association created World Wide Pictures as a subsidiary in 1951 to produce and distribute Christian films. Throughout the '50s and '60s Christian films were produced with increasing professionalism and ads for Christian films often appeared in magazines such as Christianity Today.

Since The Great Commandment opened in movie theaters in 1941, many Christian filmmakers have attempted to pursue theatrical releases. World Wide Pictures was a pioneer in partnering with churches to bring Christian films to the cinema. Gateway Films (now Gateway Films/Vision Video) was "formed with the express purpose of communicating the Christian Gospel in the secular motion picture theaters" and released The Cross and the Switchblade in 1972. In 1979, the Jesus film appeared in theaters across the United States. This film, based on the Gospel of Luke, was made for $6 million by Campus Crusade for Christ.[9] Many Christian films have been released to theaters since that time, such as The Omega Code (1999), Megiddo: The Omega Code 2 (2001), Jonah: A VeggieTales Movie (2002), Time Changer (2002), The Passion of the Christ (2004), Facing the Giants (2006), The Ultimate Gift (2007), Amazing Grace (2007), The Pirates Who Don't Do Anything: A VeggieTales Movie (2008), Fireproof (2008), The Secrets of Jonathan Sperry (2009), To Save a Life (2010), Preacher's Kid (2010), Letters to God (2010), What If... (2010), The Grace Card (2011), Soul Surfer (2011) and Courageous (2011).

ChristianCinema.com is a website that lists movies related to Christianity.

In 2006, nearly 50 Christian-faith films were produced. The films grossed an average $39 million. All five of the major Hollywood studios have created marketing departments to target the growing demand for faith-based and family fare. Movieguide publisher Ted Baehr said, "There is competition for the Christian audience now that there hasn't been before. I thought at some point it would level off, but so far it's getting bigger and bigger. It's more than I could have possibly imagined. One of the audiences that has become stable and even grown for books, music and movies is the Christian audience."[10]

Possibility Pictures is working on Letters to God, a film about a young boy fighting cancer who writes letters to God. Sherwood Pictures released the over-all successful Christian film Courageous in 2011. Praise Pictures is working on 2010's Standing Firm. Five & Two Pictures has plans for True Champion, a 2011 film about national roller skating champion Katie Tricarico.[11] HeuMoore, makers of The Widow's Might, are currently making Ace Wonder: Message from a Dead Man.[12] Fresh Fruit Films is launching the series Fresh Fruit Pie on October 5, 2010.[13] and Glowing Nose LLC is releasing the comedy film Bringing up Bobby. STARS Pictures is working on "Leap: Rise of the Beast"[14]

South Africa is particularly hungry for faith-based, family-values films for its predominantly Christian Afrikaner audience. Faith Like Potatoes, Regardt van den Bergh's feature film biopic of Angus Buchan, a farmer turned preacher, bolted the genre when it was released in South Africa in 2006. When Sony Pictures Home Entertainment released the film in April in the U.S., it sold more than 230,000 DVDs in the first three months, making it one of the top-selling DVDs in the Christian market. Lion of Judah, South Africa's first CGI animated feature, will be hoping to do even better in April 2010, when Eternal Pictures plans a U.S. release the 3D retelling the Easter story from animals' perspective.[15]

Nigerian Christians are actively contributing to the booming Nigerian film industry known as Nollywood. Christian films makes up about 20% of Nigerian films. Independent companies, ministries, and large churches producing hundreds of Christian films often see themselves as an alternative to Nollywood. Nevertheless, they have participated in mainstream success and many of the films appear on state television channels.[16]

The Redeemed Christian Church of God founded Dove Studios, which has become the country’s biggest movie studio and distributor.[17] More than 50,000 copies of their movies were sold before April 2006.[18] The Gospel Film Festival (GOFESTIVAL) is also a major Nigeria film attraction.[19]