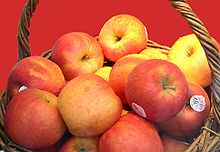 Price look-up codes, commonly called PLU codes, PLU numbers, PLUs, produce codes, or produce labels, are identification numbers affixed to produce and other products in grocery stores and supermarkets to make check-out and inventory control easier, faster, and more accurate. The code is usually a four-digit number, currently in the 3000–4999 range,[1] identifying the type of bulk produce, including the variety. A fifth digit may be prefixed to the number to indicate if the produce is organic (prefixed by a '9') or genetically modified (prefixed by an '8').[2]

The codes have been in use since 1990, and there are over 1300 universal PLU codes assigned as of 2008.[1] Use of PLU codes eliminates the need for grocery store checkers to identify each variety of produce visually. This advantage is especially important with the growth of the organic produce market; organic and conventional oranges, for example, may look the same but have very different prices.

The system is administered by the International Federation for Produce Standards (IFPS), an affiliate of the Produce Marketing Association.[3] Adherence to the IFPS's PLU standards is voluntary, including the decision to label produce as organic or genetically modified.[2]

PLU codes are used primarily in retail grocery stores or supermarkets, where they are keyed into a point of sale system by a cashier, or by the customer at a self checkout machine, while the produce is being weighed on a scale. PLUs can also be defined by the individual retailer, or location, and used in place of barcodes for a variety of reasons.

Price look-up codes are generally printed on small stickers or tags. Since 2006, the 4-digit code is often supplemented by a GS1 DataBar Stacked Omnidirectional barcode.[4] Various new technologies are under consideration, including etching using lasers and printing or "tattooing" using ink made from substances such as blueberry juice.[5]