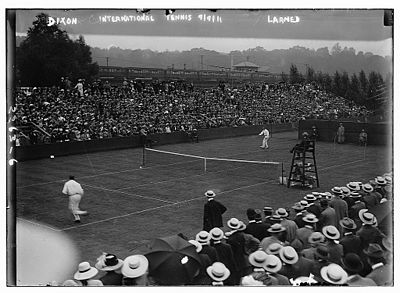 Charles Dixon vs. William Augustus Larned on September 9, 1911 at The Championships, Wimbledon

Charles Percy Dixon (7 February 1873 – 29 April 1939) was a male tennis player from Great Britain. He was a four-time Olympic medallist and led a successful British team to victory in the Davis Cup.

He was born on 7 February 1873 in Grantham, Lincolnshire. At the 1908 Summer Olympics in London he won a bronze medal in the men's doubles event. In the 1912 Summer Olympics he won three medals in the indoor tennis events: gold in the mixed doubles, silver in men's singles and bronze in men's doubles.[1]

From 1929 to 1932 he represented the International Club of Great Britain against France at Queens and at Ateuil in 1932 and 1933. After retiring from tournaments, he coached juniors and umpired at Wimbledon, becoming President of the Umpire's Association. He died on 29 April 1939.[1]

Dixon was born in 1873, the year that Major Walter Clopton Wingfield defined the first rules for lawn tennis. Dixon participated in games played during those early years. His early career included victories in international tournaments overseas:

Dixon was better known at the time for his many successes when representing Britain in the Davis Cup: starting in the 1909 Cup in Philadelphia, he led the British team to victory in the 1912 Cup in Australia.[1]

He was a member of the English Drive Club team in South Africa in 1910-1911, and reached the final of the Wimbledon Tennis Championship later that year. He was runner-up to Herbert Roper Barrett, his partner in the Davis Cup, and with whom he won the doubles at Wimbledon in 1912 and 1913.

He represented Haileybury and Cambridge at racquets, winning the silver medal in 1891. He was also a keen prize-winning golfer, and represented Britain in international fencing in Paris.

His brother, J A Dixon, was captain of Nottinghamshire County Cricket Club.

In 1897 he married Louise Robinson , and until his death they lived at Chestnut Road, West Norwood.

After cremation his ashes were buried nearby at the Robinson family plot in West Norwood Cemetery.