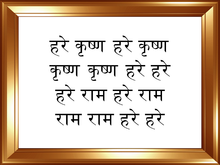 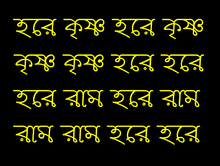 The Hare Krishna mantra, also referred to reverentially as the Maha Mantra ("Great Mantra"), is a sixteen-word Vaishnava mantra which first appeared in the Kali-Santarana Upanishad, and which from the 15th century rose to importance in the Bhakti movement following the teachings of Chaitanya Mahaprabhu.

According to Gaudiya Vaishnava theology, one's original consciousness and goal of life is pure love of God (Krishna).[1] Since the 1960s, the mantra has been made well known outside of India by A. C. Bhaktivedanta Swami Prabhupada and his International Society for Krishna Consciousness (commonly known as "the Hare Krishnas").[2]

The Hare Krishna mantra is composed of Sanskrit names in the vocative case: Hare, Krishna, and Rama (in Anglicized spelling, the transliteration of the three vocatives is hare, kṛṣṇa and rāma, pronounced [ˈhɐreː, ˈkr̩ʂɳɐ, ˈraːmɐ]). It is an anustubh poetry stanza:

"Hare" can be interpreted as either the vocative of Hari, another name of Vishnu meaning "he who removes illusion", or as the vocative of Harā,[3] a name of Rādhā,[4] Krishna's eternal consort or Shakti. According to A. C. Bhaktivedanta Swami Prabhupada, Harā refers to "the energy of God" while Krishna and Rama refer to God himself, meaning "He who is All-Attractive" and "He who is the Source of All Pleasure".[5] Rama can refer to Ramachandra or to Krishna as Radha-Raman, another name of Krishna meaning beloved of Radha.[6] In the hymn Vishnu Sahasranama spoken by Bhishma in praise of Krishna after the Kurukshetra War, Krishna is also called Rama.[7] Rama can also be a shortened form of Balarama, Krishna's first expansion.[8]

The mantra is repeated, either out loud (kirtan), softly to oneself (japa), or internally within the mind. A.C Bhaktivedanta Swami describes the process of chanting the Maha Mantra as follows: 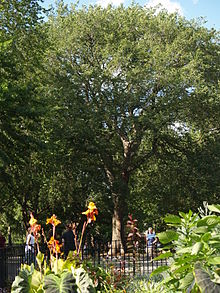 The Hare Krishna Tree in Tompkins Square Park, New York City under which Bhaktivedanta Swami Prabhupada began the first recorded public chanting of the Hare Krishna mantra outside of India.[10]

The mantra is first attested in the kalisaṇṭāraṇopaniṣad (Kali Santarana Upanishad), a Vaishnava Upanishad associated with the Krishna Yajurveda. In this Upanishad, Narada is instructed by Brahma (in the translation of K. N. Aiyar):

Hearken to that which all Shrutis (the Vedas) keep secret and hidden, through which one may cross the Samsara (mundane existence) of Kali. He shakes off (the evil effects of) Kali through the mere uttering of the name of Lord Narayana, who is the primeval Purusha.

Narada asks to be told this name of Narayana, and Brahma replies[citation needed]:

The mantra was popularized by Chaitanya Mahaprabhu roughly around 1500 AD when he began his mission to spread this mantra publicly to "every town and village" in the world, travelling throughout India, and especially within the areas of Bengal and Orissa.[11] Some versions of the Kali Santarana Upanishad give the mantra with Hare Rama preceding Hare Krishna(as quoted above), and others with Hare Krishna preceding Hare Rama. as in Navadvipa version of the manuscript. The latter format is by far the more common within the Vaishnava traditions.[12] It is a common belief that the mantra is equally potent when spoken in either order.[13]

A. C. Bhaktivedanta Swami Prabhupada, a pure devotee of Krishna in disciplic succession, on the order of his guru, Srila Bhaktisiddhanta Sarasvati Thakura, brought the teachings of Sri Chaitanya from Bharat (India) and single-handedly took the responsibility of spreading them around the Western world. Beginning in New York 1965, he encircled the globe fourteen times in the final eleven years of his life, thus making 'Hare Krishna' a well-known phrase in many parts of the world.[14]

In the late 1960s and early 1970s, the Hare Krishnas became confused with the hippie subculture. This was an erroneous association, as the ideals of these groups are quite different. Although Prabhupada was open to anyone becoming a member of the Hare Krishnas, they had to follow the four regulative principles, one of which is strict abstention from intoxicants, including marijuana.[15] Elevation and joy were to be derived from chanting God's holy names.

The hippie Broadway musical "Hair" has a song, "Be-In" with the mantra in it, along with some additional lyrics.

The Hare Krishna mantra appears in a number of famous songs, notably those sung by The Beatles (in the lyrics of John Lennon and George Harrison), and has been at the number-one spot in the UK singles charts on more than one occasion within songs such as Harrison's "My Sweet Lord". George Harrison put a Hare Krishna sticker on the back of the headstock of Eric Clapton's 1964 Gibson ES-335; the sticker also appeared on Gibson's 2005 reproduction of the guitar.

The mantra also appears in The Pretenders' Boots of Chinese Plastic.[16]

The Radha Krsna Temple's recording Hare Krsna Mantra was released as a single on The Beatles' Apple Records label in 1969, and reached #12 in the UK music chart and appeared on the music show Top of the Pops. It also made the #1 slot in both German and Czechoslovakian music charts.

Less well-known but equally relevant to fans of pop music culture are recordings of the Hare Krishna mantra by The Fugs on their 1968 album Tenderness Junction (featuring poet Allen Ginsberg), by Nina Hagen, and by Hüsker Dü on their 1984 album Zen Arcade. [17]

Kula Shaker, Boy George, and members of The Rubettes have recorded music tracks about Krishna Consciousness.

At the 2008 and 2009 VMA Awards, the host, English comedian Russell Brand ended the ceremony by saying Hare Krishna, as he does at all his shows.

In the Muppet Movie a running gag entailed one character saying they were lost and the other saying "maybe you should try Hare Krishna."

In the Seinfeld episode The Subway, a patron in Monk's restaurant yells, "Hare Krishna! Hare Krishna!" when he sees George walk in wearing only a bedsheet. A similar scenario occurs in Scrubs when J.D. shaves his head in support for a chemo patient, and in the movie Stripes when John Candy's character leaves the army barber.

The Hare Krishnas are featured in the popular video game series Grand Theft Auto originally as pedestrians, and in later installments as a gang.

In the film 'Osmosis Jones' (2001), Jones pushes past two cells in Franks stomach who are singing 'Hare Krishna' whilst playing a drum and jiggling a tambourine.

The practice of chanting the Hare Krishna mantra is recommended in the Puranas, the Pañcaratra, and throughout Vaishnava literature in general.[18] For example:

All the grievous sins are removed for one who worships Lord Sri Hari, the Lord of all lords, and chants the holy name, the Maha-mantra.

When the sixteen names and thirty-two syllables of the Hare Krishna mantra are loudly vibrated, Krishna dances on one's tongue