Certified Copy (French: Copie conforme) is a 2010 film by Iranian writer and director Abbas Kiarostami, starring Juliette Binoche and the British opera singer William Shimell, in his first film role. The film is set in Tuscany, and focuses on a British writer and a French antiques dealer, whose relationship undergoes an odd transformation over the course of a day. The film was a French-majority production, with co-producers in Italy and Belgium. The dialogue is in French, English and Italian.

The film premiered at the 2010 Cannes Film Festival, where Binoche won the Best Actress Award for her performance. Critics have been mostly positive and have compared the film to several others, notably Roberto Rosselini's 1954 film Journey to Italy.

British writer James Miller (Shimell) is in Tuscany to give a talk about his new book, titled "Certified Copy", which argues that, in art, issues of authenticity are irrelevant, because every reproduction is itself an original and even the original is a copy of another form. A French antiques dealer, whose name is never given (Binoche), attends the talk with her 11-year-old son in order to have Miller sign the copies she has bought of the book, but has to leave early because her son is hungry. She drops off her phone number with Miller's translator.

Miller and the woman then meet at her shop, and Miller suggests they get out and see some of the countryside. The woman drives them around aimlessly while Miller signs the books, and they talk about the book's subject. They then visit a museum, and the woman gets increasingly distraught as she complains about her rebellious son and Miller seems to defend her son's behavior. They then go to a cafe. Miller steps out to take a phone call, and the woman who runs the cafe, thinking Miller is the woman's husband, gets into a conversation with the woman about marriage and about him specifically. After Miller returns and the two leave the cafe, the nature of their discussion changes: they start to speak in a combination of French and English instead of just English (Miller states that he learned the language in school), and, more unexpectedly, they now speak as if they truly are a married couple, who have been married for 15 years, and the son is both of theirs. It is left unclear which, if either, is the true reality of the film.

Abbas Kiarostami and Juliette Binoche first met and became friends in the mid-1990s. Since then they had both desired to work together and in 2008 Binoche appeared briefly in Kiarostami's experimental film Shirin. During a visit in Tehran by Binoche, Kiarostami told Binoche the synopsis of Certified Copy as a casual anecdote, which she said that she fully believed until he confessed to having made it up.[2] According to Kiarostami, studying the reactions of Binoche as she listened to the story was a vital part of the film's further development. "The film started to build according to the story that I was telling, but also according to my knowledge of her as a woman with her vulnerability, with her sensitivity, with what I knew about her soul, about her relationship with her children."[3]

The film suffered from several delays and changes in the cast. Filming was originally supposed to start in October 2007 with English as the principal language.[4] A second attempt was planned for March 2008, this time mainly in French and with Sami Frey opposite Binoche.[5] Next up to be attached was François Cluzet, with filming scheduled to begin in May 2009.[6] At some point Robert De Niro was in negotiation for the role, but eventually it was offered to William Shimell, a baritone opera singer who had never acted in a film before.[7] Kiarostami had met Shimell in 2008 during his own debut as an opera director, an adaption of Così fan tutte for the Aix-en-Provence Festival, in which Shimell performed as Don Alfonso.[8] "When I saw him, I immediately perceived in him the strength, finesse and humour of the character", Kiarostami commented on his choice.[2]

Production was led by MK2 in co-production with France 3 and the Italian company BiBi Films. Funding was granted by the CNC and via pre-sales to Canal+. The budget was 3.8 million euro.[9]

The film was finally shot from 8 June 2009 on location in Tuscany, using locations in Cortona, Lucignano and Arezzo.[10] Kiarostami is normally known for making films with amateur actors and almost no budget, but said he had no difficulties in making the transition to European cinema: "This was the simplest film for me to work on—even more simple than the work I’ve done on my shorts, because I was working with a professional team both in front of and behind the camera." He also noted how he for once felt free to express whatever he wanted in the film.[11] 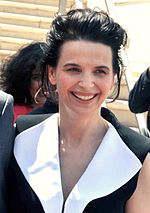 Juliette Binoche at the Cannes Film Festival for the premiere of the film.

Certified Copy premiered on 18 May 2010 at the 63rd Cannes Film Festival as part of the main competition.[12] It was released the following day in regular French cinemas through MK2.[13] The film opened in 101 venues and had an attendance of 70,876 the first week, resulting in a ninth place on the French box office chart.[14][15] After the theatrical run's second week, the number of screens had been increased to 147 and the film climbed one position on the chart, with a total attendance of 151,152.[16][17] The French website AlloCiné reported a final total of 240,797 admissions.[18]

Artificial Eye released the film in the United Kingdom on 3 September 2010.[19] It grossed £77,000 from 20 screens the opening weekend and entered the British box office chart at number 20. The Guardian reported that this was significantly better than how Kiarostami's films usually perform in the United Kingdom.[20] IFC Films acquired the rights for American distribution and Madman for Australia and New Zealand.[21]

During the release, the film was often billed as the director's first film to be made outside his native Iran, but in reality it was only his first dramatic feature film to be shot abroad. It was preceded by the 2001 documentary ABC Africa and a segment in the 2005 anthology film Tickets.[3] In Iran, the film was automatically banned by the Ministry of Culture and Islamic Guidance. Jamal Shourjeh from the ministry's Cinematic Department explained: "Certified Copy has been produced by a non-Iranian in Italy in western culture; therefore, it should have a license for national screening".[22] Iran's deputy culture minister Javad Shamaqdari later said that the film would remain banned from general screening, citing Juliette Binoche's attire in the film as the main reason, but that it would be allowed to be shown "in some private circles and universities".[23]

The French reception was very positive. "Through strokes of chased dialogue and close-ups, Abbas Kiarostami achieves a universal film, between levity and drama, about the feelings that are diluted over time", wrote Renaud Baronian in Le Parisien. Baronian also liked the lead performances, finding that Shimell "impresses with his restraint" while Binoche "proves overwhelming".[24] Nicholas Schiavi of Excessif rated the film with four stars out of five and applauded Kiarostami's craft: "With a formally refined technique and an incredible sense of frames within frames, the Iranian filmmaker offers a lesson in cinema. Each framework is a fixed organic tableau where the depth of field and the games of mirrors shape a sensory architecture. One can perceive the remains of the past and the possibilities of an idyll."[25] Emmanuèle Frois of Le Figaro wrote: "Inspired by Roberto Rossellini, Abbas Kiarostami signs his own Journey to Italy without plagiarizing the original." Frois noted how believable she found the couple with their "desires, disappointments, misunderstandings, hopes", and how the narrative alternates between drama and comedy, "like in life."[26]

As of 21 March 2011 and based on 72 reviews collected at the review aggregator website Rotten Tomatoes, 90% of the film's American and British reviews were overall positive, with an average rating of 7.8 out of ten.[27] In The Hollywood Reporter, Deborah Young called Certified Copy "a delicate, bittersweet comedy". Young wrote that Binoche was given "a chance to display her noteworthy gifts as a comedienne, switching effortlessly from English to French and Italian to build a character that is resentful, manipulative and seductive all at once", and that Shimell's "elegant cool is very close to George Sanders'", referring to Sanders' role in Journey to Italy.[28] Peter Bradshaw of The Guardian was less impressed: "It is a film that is pregnant with ideas, and for aspiring to a cinema of ideas Kiarostami is to be thanked and admired. But the simple human inter-relation between the two characters is never in the smallest way convincing, and there is a translated, inert feel to the dialogue." Bradshaw rated the film with two stars out of five and went as far as comparing parts of it to "the work of a highly intelligent and observant space alien who still has not quite grasped how Earthlings actually relate to each other."[29] David Denby of The New Yorker called the film "fascinating, beautiful, and intentionally enraging: a brilliant return to form from a director whose work, in the past, has joined modernist game-playing to ethical propriety and modesty." Stephen Holden of The New York Times compared the film to, and suggested it has drawn inspiration from, several European films from the 1950s and early 1960s, including Journey to Italy, L'Avventura and Last Year at Marienbad, as well as several films from the 1990s and 2000s: In the Mood for Love, Before Sunrise and Before Sunset.[30]

Binoche received the Best Actress Award at the Cannes prize ceremony on 23 May 2010. The actress used her acceptance speech to bring attention to the Iranian director Jafar Panahi. Panahi had been set to be in the festival's jury, but was held imprisoned by the Iranian regime during the event.[31]