Sadd Sports Club known as Al-Sadd Club (Arabic: نادي السد الرياضي‎) is a Qatari sports club, best known for its football team of the Qatar National First Division, from the city of Doha. The club goes with the Nickname "Al-Zaeem", which translates to "The Boss", and was founded by four students (led by Nasser) on the October 21, 1969 in Qatar's capital city. Al Sadd is undoubtedly the country's most successful team. The club also has handball, basketball, volleyball, table tennis and athletics sides.[1]

The club was established by four students who excelled in playing football. They refused to join other clubs of the time and decided to make their own club, resulting in the formation of Al-Sadd Sports Club.

The club won the first ever Qatari League in 1971–72. It, along with Al-Arabi and Al-Rayyan, went on to dominate Qatari football in the 70's and the 80's by winning many Qatari League trophies and Emir Cups. In 1989, Al-Sadd became the first Arab side to win the Asian Champions League when they defeated Al Rasheed of Iraq in the final.

The 1990s were a lean phase for Al-Sadd, regarding the Qatari League. They could not win even one league championship during that period. However, they did manage to open their account in the Heir Apparent Trophy and also won the Gulf Club Champions Cup in 1991.

The new millennium opened up a new era for Al-Sadd. They returned to winning ways in the Qatari League, won many Emir Cups and Heir Apparent trophies. They also managed a triple crown in regional football by winning the Arab Champions League in 2001.

In 2007, under the command of Uruguayan coach Jorge Fossati, they achieved a quadruple by winning all four domestic cups. They were the first Qatari team to do so.

History in the Champions League

Al Sadd has a long and storied history in the AFC Champions League. They have taken part in all Champions League tournaments since the cup was revamped in 2003, except for the 2009 edition, boasting more appearences than any other team except Pakhtakor Tashkent. The club won their Champions League debut in 1988 (then known as Asian Club Championship), where they secured the top position in their group. They faced Al-Rasheed of Iraq in the final, defeating them on away goals, thus fending the Iraqis off to claim the title of the first Arab team to ever win the championship. Al Sadd also reached the semi-finals of the Asian Cup Winners' Cup in 2002, losing 1-0 to Al Hilal of Saudi Arabia.

In the 2004 AFC Champions League, Al Sadd was tangled up in a controversy with Kuwaiti club Al Qadsiya when they faced up against Al Qadsiya in a group stage match in Kuwait City in April 2004. It was a bad tempered encounter which saw an Al Qadsiya player sent off prior to the incident which subsequently ensued. During stoppage time, a huge fracas broke out between the players. In the chaos that followed, local security personnel came onto the pitch, but to the amazement of the fans, they appeared to attack some of the visiting Al Sadd players rather than trying to stop the fighting. After a grueling 14-minute delay, the referee sent off a player from each match, but more sanctions were to follow after an official investigation by AFC. Then-president of AFC, Qatari football president Mohammed Bin Hammam described the whole event as a 'boxing match'.

Al Qadsiya, who had gone to the top of their group, were expelled from the Champions League, disqualified from all AFC competitions for three seasons, fined US$20,000 and had a blanket suspension imposed on all of its players and officials from AFC competitions for two years. On the other hand, Al Sadd were allowed to remain in the competition, but five of their players were handed two-year suspensions from all AFC tournaments. On further review, the punishments were reduced, although five Al Sadd players had to sit out the AFC Champions League the following year.[3]

The results of all of Al Qadsiya's matches in that season's competition were expunged from the official records, thus erasing their record against Al Sadd. Al Sadd, only demanding only a single win over the bottom side Al Quwa Al Jawiya in their last group game to advance to the quarter-finals, lost the game 1-0, thus handing the quarter-final spot to Emirati club Al Wahda.

A similar controvery occurred during the 2011 AFC Champions League. Al Sadd was placed in the qualifying play-offs courtesy of the disqualification of Vietnamese teams due to the non-submission of documents. They beat Al-Ittihad of Syria and Indian club Dempo SC 5-1[4] and 2-0 respectively to acquire a spot in the group stage. Al Sadd, who were the definite underdogs, overcame the odds and topped their group to play against Al-Shabab, whom they beat 1-0.

The quarter-final against Sepahan would mark the first sign of controversy for the club. Sepahan had initially won the first-leg match against Al Sadd 1-0, however, after the match, Al Sadd lodged a formal complaint to the AFC as Sepahan had fielded an inelligible player, Rahman Ahmadi, who previously receieved two yellow cards in the tournament with his former club Persepolis. The match was overturned 3-0 in favor of Al Sadd, virtually ensuring the club a place in the semi-finals.[5]

They faced Suwon Samsung Bluewings in a highly publicized semi-final. Suwon were favorites to win after knocking last year's champions, Zob Ahan, out of the running. The first-leg match was played in Suwon, South Korea. In the 70th minute of the match, Mamadou Niang of Al Sadd had a deflected shot veer past the goalkeeper in the back of the net, settling the score 1-0.

In the 80th minute of the match, a Suwon player was inadvertently kicked in the head by an Al Sadd defender, prompting Suwon to kick the ball out of play. While the injured Suwon player was being tended to, Keita took the free kick quickly, passing it through the Suwon defense who believed they would have posession returned, to Niang who sprinted past the keeper to score a second goal. This infuriated the Suwon players. The chaos was elevated when a Suwon fan had run onto the pitch, sparking a mass melee which involved both, coaching staff and players, between the two teams. After the fight was brought to a halt, the referee sent off a player from each team while Niang later got a red card and Al Sadd's Lee Jung-Soo had walked off the pitch in frustration.[6] The melee prompted official investigation from the AFC, who suspended three players from both teams for six games.[7]

Despite an inspired performance by Khalfan Ibrahim, Al Sadd lost the 2nd leg 1-0, however this allowed them to advance to the final with a 2-1 aggregate to face Jeonbuk Hyundai Motors. Al Sadd earned the nickname "Al Badd" from the Korean media as a result of their heated semi-final confrontations.

As of 1 July 2011 Note: Flags indicate national team as has been defined under FIFA eligibility rules. Players may hold more than one non-FIFA nationality. 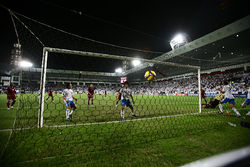 The matches are played in the state-of-the-art (soccer-specific) Jassim Bin Hamad Stadium, whose capacity adds up to 18,000, including VIP stands. Such a capacity reflects the demand expected from the Qatari population, which has yet to reach 1 million people. The stadium, originally built in 1974, was rebuilt in 2004 for the Gulf Cup. The stadium has a unique atmosphere, and being close to the city centre it attracts lots of fans. For these reasons, the Qatar national football team plays most of its matches in this stadium, the stadium is also the first and only stadium that has air conditioning.

One of Al-Sadd's nicknames are Al-Zaeem (The Boss) and Al-Dheeb (The Wolf). From the foundation of the club, the common home kit includes a white shirt, black or white shorts, and white or yellow socks. White and black colours are also seen in the crest. The away kit of the club is commonly with a black background.

Rankings are calculated by the IFFHS.[11]