Mastani (died 1740) was the wife of Peshwa Baji Rao I (1699–1740), an Indian general and prime minister to the fourth Maratha Chhatrapati (Emperor) Shahuji. She is said to have been a beautiful and brave woman.[2]

Mastani was a daughter of a Hindu, Maharaja Chhatrasal (1649–1731), of Bundelkhand province,[3] and was borne by his Persian Moslem wife. When a Mughal chief from Allahabad, Mohammad Khan Bangash, invaded Chhattrasal’s kingdom during 1727-28 and imprisoned him and his family, Chhattrasal sent a secret message, seeking help, to Baji Rao, who happened to be on a military campaign in the vicinity of Bundelkhand. Bajirao came to the rescue of Chhatrasal, defeated Bangash's army, and restored Chhatrasal to his throne. In gratitude, Chattrasal gave Bajirao his daughter Mastani, and also a third of his kingdom, including Jhansi, Sagar and Kalpi. He also gave 33 lakh gold coins to Bajirao.

However sources vary on this context. According to the second view she was daughter of Nizam of Hyderbad, Maratha who have defeated Nizam in 1734 was advised by his wife to marry his daughter to Peshwa to foster friendly relations with the Marathas who had become the most dominant power in India and in the Indian Subcontinent.[4]. The third origin of Mastani is said to be that she was a dancer in Nizam Court and after Nizam accepted the defeated during the meeting of Peshwa with Nizam he fell in love with Mastani and married her which was condemned by Brahmins and other Hindus as Baji Rao was an upper caste Brahmin.[5]. However the most accepted version is that she was daughter of Chatrasal with his Persian Moslem wife. Mastani is often referred to as Bajirao's concubine or mistress. However, she was his lawfully wedded wife.
Mastani gave the Peshwa two sons, on whom their father bestowed the jagir of Banda. The two brothers fought on the side of the Marathas in the third Battle of Panipat in a.d. 1761 between Ahmed Shah Abdali and the Marathas and one of them is said to have been killed in the battle.[6]

Mastani was a skilled horse-rider, and she accompanied Baji Rao on his military campaigns. According to legends, she was skilled in spear-throwing and swordsmanship. She was also a talented dancer and singer. Both Mastani and Baji Rao's wife, Kashibai, bore sons to Baji Rao within a few months of each other. Kashibai's child died at an early age. Mastani's child was named Shamsher Bahadur. 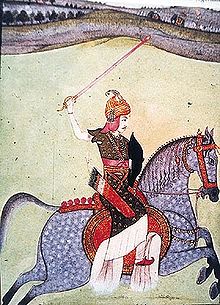 The palace at Kothrud was dismantled and parts of this are displayed at a special section of Raja Kelkar Museum.[2][3]

Mastani lived for some time with Baji Rao at his palace of Shaniwar Wada in the city of Pune. The palace's north-east corner held Mastani Mahal and had its own external doorway called Mastani darwaza. Because of his family's intolerance of Mastani, Baji Rao later built a separate residence for Mastani at Kothrud in 1734,[3] some distance away from Shaniwar Wada. The site still exists at the Mrutyunjay temple on Karve road. Court records (Bakhars) during Bajirao's regime specifically never included any reference to her.[citation needed] Historians have determined that the paintings of Mastani in both Raja Kelkar museum and Wai museum are not authentic.[citation needed]

In April 1740, while Baji Rao was inspecting his lands at Khargon, he suddenly became ill and died. Baji Rao's wife Kashibai, his brother Chimnaji Appa, his son Balaji (Nanasaheb), and Mastani came to Khargon. Bajirao's mortal remains were consigned to flames on 28 April 1740, at Raver Khed on the banks of the Narmada River. Mastani died at Pabal Village near Pune, soon afterwards.

According to popular folklore, Mastani committed suicide after hearing about Bajirao's death, by drinking poison from a ring which she was wearing. Others say that she jumped into the funeral pyre of her husband and committed sati. No documentation is available to confirm the actual cause. However it is accepted that she did not live long after Bajirao's demise and died in 1740.[7]

Her grave is in Pabal. It is called Mastani's Samadhi and is maintained by Mr. Inamdar.[8]

Kashibai took Mastani's six-year-old son Shamsher Bahadur (also named as Krushnarao) into her household and raised him as one of her own. Shamsher grew up into a formidable warrior and fought in the Third Battle of Panipat in 14/1/1761 against Ahmed Shah Abdali. Durani, alongside his half-cousin Sadashivrao Bhau and his half-nephew Vishwasrao, Nanasaheb's son. Shamsher Bahadur, barely 27 at the time, lost his life along with Sadashivrao Bhau and Vishwasrao in that battle. Shamsher Bahadur's son, Ali Bahadur, ruled over Baji Rao's lands in Bundelkhand, and founded the state of Banda, Uttar Pradesh.

The story of Baji Rao and Mastani was made into a motion picture, Mastani, directed by Dhirubhai Desai, and released in 1955.[9] Sanjay Leela Bhansali announced in 2003 that he wanted to make a film titled "Bajirao Mastani", but he has indefinitely postponed the project.[citation needed] A Marathi serial, "Rau", was produced in the 1990s, based on a Marathi book of the same name by historical novelist N. S. Inamdar about the life story of Baji Rao and Mastani. Currently a daily serial is being broadcast on ETV Marathi by the name, Shrimant Peshwa Bajirao Mastani.[10]

Local lore in Pune believes that while in Pune, Mastani used to go for her bath to a lake (created by Bajirao specially for Mastani on Pune - Saswad Road) with her entourage. That lake still exists there.