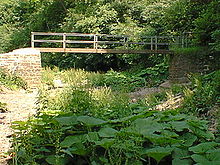 A bridge over a dry River Manifold, near Grindon.

The River Manifold is a river in Staffordshire, England. It is a tributary of the River Dove (which also flows through the Peak District forming the boundary between Derbyshire and Staffordshire).

The Manifold rises just south of Buxton near Axe Edge, at the northern edge of the White Peak of the Peak District National Park, known for its limestone beds. It continues for 12 miles before it joins the Dove. For part of its course, it runs underground, (except when in spate), from Wetton Mill to Ilam. During this section it is joined by its major tributary, the River Hamps.

Villages on the river include Longnor, Hulme End, Waterhouses (which is actually on the River Hamps), and Ilam.

Its name may come from Anglo-Saxon manig-fald = "many folds", referring to its meanders.

The Manifold Way is the name given to an 8-mile long distance footpath from Hulme End to Waterhouses, along the former route of the narrow gauge (2' 6") Leek and Manifold Valley Light Railway which operated between 1904 and 1934. Opened in July 1937 after the LMS handed over the trackbed to Staffordshire County Council, it is tarmacked throughout.

The Manifold Valley Visitor Centre is housed in Hulme End Station which also has a model of the railway.

Mining in the Manifold Valley

Nowadays there is little trace of the Industry that made many people (mainly the Duke of Devonshire who at one time owned the Ecton mines) very rich. The main areas of interest are around Ecton where the old spoil banks and the old engine house still remain.