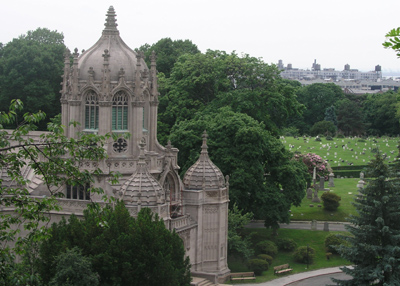 Located in , it lies several blocks southwest of Prospect Park, between Park Slope, Windsor Terrace and Sunset Park. In "", it was said that "it is the ambition of the New Yorker to live upon the Fifth Avenue, to take his airings in the Park, and to sleep with his fathers in Green-Wood".

The cemetery was the idea of Henry Evelyn Pierrepoint, a Brooklyn social leader. It was a popular tourist attraction in the 1850s and was the place most famous New Yorkers who died during the second half of the nineteenth century were buried. It is still an operating cemetery with approximately 600,000 graves spread out over 478 acres (1.9 km²). The rolling hills and dales, several ponds and an on-site chapel provide an environment that still draws visitors. On weekends cars are allowed on cemetery grounds. There are several famous monuments located there, including a statue of and a Civil War Memorial. During the Civil War, Green-Wood Cemetery created the "Soldiers' Lot" for free veterans' burials.