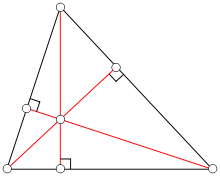 Three altitudes intersecting at the orthocenter

Altitudes can be used to compute the area of a triangle: one half of the product of an altitude's length and its base's length equals the triangle's area, as well as being related to the sides of the triangle through trigonometric functions.

Unlike the centroid and circumcenter of a triangle, the orthocenter has no special characteristics (such as being equidistant from all sides or vertices).

Four points in the plane such that one of them is the orthocenter of the triangle formed by the other three are called an orthocentric system or orthocentric quadrangle.

Let A, B, C denote the angles of the reference triangle, and let a = |BC|, b = |CA|, c = |AB| be the sidelengths. The orthocenter has trilinear coordinates sec A : sec B : sec C and barycentric coordinates 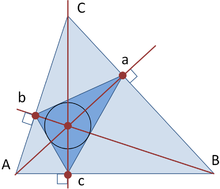 Triangle abc is the orthic triangle of triangle ABC

The orthic triangle provides the solution to Fagnano's problem which in 1775 asked for the minimum perimeter triangle inscribed in a given acute-angle triangle.

The orthic triangle of an acute triangle gives a triangular light route.[2]

For any point P within an equilateral triangle, the sum of the perpendiculars to the three sides is equal to the altitude of the triangle.

Consider an arbitrary triangle with sides a, b, c and with corresponding altitudes α, β, η. The altitudes and incircle radius r are related by

Let c, h, s be the sides of 3 squares associated with the right triangle; the square on the hypotenuse, and the triangle's 2 inscribed squares respectively. The sides of these squares (c>h>s) and the incircle radius r are related by a similar formula: