File sharing
This article is about file sharing over the Internet. For printer and file sharing as local area network service, see shared resource.

File sharing is the practice of distributing or providing access to digitally stored information, such as computer programs, multimedia (audio, images, and video), documents, or electronic books. It may be implemented through a variety of ways. Common methods of storage, transmission, and distribution used in file sharing include manual sharing using removable media, centralized servers on computer networks, World Wide Web-based hyperlinked documents, and the use of distributed peer-to-peer networking (see peer-to-peer file sharing).

Users can use software that connects in to a peer-to-peer network to search for shared files on the computers of other users (i.e. peers) connected to the network. Files of interest can then be downloaded directly from other users on the network. Typically, large files are broken down into smaller chunks, which may be obtained from multiple peers and then reassembled by the downloader. This is done while the peer is simultaneously uploading the chunks it already has to other peers.

File hosting services are a simple alternative to peer-to-peer software. These are sometimes used together with Internet collaboration tools such as email, forums, blogs, or any other medium in which links to direct downloads from file hosting services can be embedded. These sites typically host files so that others can download them.

Files were first exchanged on removable media.[citation needed] Computers were able to access remote files using filesystem mounting, bulletin board systems (1978), Usenet (1979), and FTP servers (1985). Internet Relay Chat (1988) and Hotline (1997) enabled users to communicate remotely through chat and to exchange files. The mp3 encoding, which was standardized in 1991 and which substantially reduced the size of audio files, grew to widespread use in the late 1990s. In 1998, MP3.com and Audiogalaxy were established, the Digital Millennium Copyright Act was unanimously passed, and the first mp3 player devices were launched. MP3.com offered music by unsigned artists, and grew to serve 4 million audio downloads daily.[citation needed]

In June 1999, Napster was released as a centralized unstructured peer-to-peer system,[1] requiring a central server for indexing and peer discovery. It is generally credited as being the first peer-to-peer file sharing system. In the case of Napster,[2] an online service provider could not use the "transitory network transmission" safe harbor in the DMCA if they had control of the network with a server. Many P2P products will, by their very nature, flunk this requirement, just as Napster did.[3] Napster provided a service where they indexed and stored file information that users of Napster made available on their computers for others to download, and the files were transferred directly between the host and client users after authorization by Napster.

Gnutella, eDonkey2000, and Freenet were released in 2000, as MP3.com and Napster were facing litigation. Gnutella, released in March, was the first decentralized file sharing network. In the gnutella network, all connecting software was considered equal, and therefore the network had no central point of failure. In July, Freenet was released and became the first anonymity network. In September the eDonkey2000 client and server software was released.

In 2001, Kazaa and Poisoned for the Mac was released. Its FastTrack network was distributed, though unlike gnutella, it assigned more traffic to 'supernodes' to increase routing efficiency. The network was proprietary and encrypted, and the Kazaa team made substantial efforts to keep other clients such as Morpheus off of the FastTrack network.

In July 2001, Napster was sued by several recording companies and lost in A&M Records, Inc. v. Napster, Inc.. Shortly after loss in court Napster has been shut down to comply with court order. This drove users to other P2P applications and file sharing continued its exponential growth.[4] The Audiogalaxy Satellite client grew in popularity, and the LimeWire client and BitTorrent protocol were released. Until its decline in 2004, Kazaa was the most popular file sharing program despite bundled malware and legal battles in the Netherlands, Australia, and the United States. In 2002, a Tokyo district court ruling shut down File Rogue and an RIAA lawsuit effectively shut down Audiogalaxy. 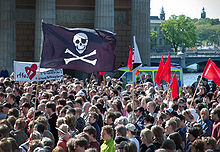 From 2002 through 2003, a number of BitTorrent services were established, including Suprnova.org, isoHunt, TorrentSpy, and The Pirate Bay. In 2002, the RIAA was filing lawsuits against Kazaa users. As a result of such lawsuits, many universities added file sharing regulations in their school administrative codes (though some students managed to circumvent them during after school hours). With the shut down of eDonkey in 2005, eMule became the dominant client of the eDonkey network. In 2006, police raids took down the Razorback2 eDonkey server and temporarily took down The Pirate Bay. Pro-piracy demonstrations took place in Sweden in response to the Pirate Bay raid.

In 2009, the Pirate Bay trial ended in a guilty verdict for the primary founders of the tracker. The decision was appealed, leading to a second guilty verdict in November 2010. In October 2010, Limewire was forced to shut down following a court order in Arista Records LLC v. Lime Group LLC but the gnutella network remains active through open source clients like Frostwire and gtk-gnutella. Furthermore, multi-protocol file sharing software such as MLDonkey and Shareaza adapted in order to support all the major file sharing protocols, so users no longer had to install and configure multiple file sharing programs.

The legal debate surrounding file sharing has caused many lawsuits. In the United States, some of these lawsuits have even reached the Supreme Court in MGM v. Grokster. In that particular lawsuit, the Supreme Court has ruled that the creators of P2P networks can be held responsible if the intent of their program is clearly to infringe on copyright laws.

On the other hand, file sharing is not necessarily illegal, even if the works being shared are covered by copyright. For example, some artists may choose to support freeware, shareware, open source, or anti-copyright, and advocate the use of file sharing as a free promotional tool. Nearly all shareware, freeware, and open source software may be shared as much as the end user wishes, depending on the license for that specific piece of software.[citation needed] Content in the public domain can also be freely shared.

In 2004 there were an estimated 70 million people participating in online file sharing.[5] According to a CBS News poll, in 2009 fifty-eight percent of Americans who follow the file sharing issue, considered it acceptable in at least some circumstances; with 18 to 29 year olds this percentage reached as much as 70%.[6]