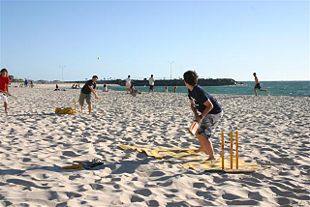 Example of beach cricket being played at Cottesloe Beach in Perth. The bowler bowls to batsman, while the rest field.

Backyard cricket, street cricket, beach cricket, gully cricket, corridor cricket, deef (Hindi: गली, galli = "alley") or garden cricket is an informal ad hoc variant of the game of cricket, played by people of both sexes and all ages in gardens, back yards, on the street, in parks, carparks, beaches or any deef arena not specifically intended for the purpose

Whilst loosely based upon the game of cricket, many aspects are improvised: the playing ground, the rules, the teams, and the equipment. Quite often there are no teams at all; the players take turns at batting and there is often no emphasis on actually scoring runs. The bat can be anything, as long as it can hit the ball and can be suitably held in the hands. However, usage of a bat is necessary. A ball is the other essential item. Tennis balls are often used due to the fact that they are less likely to inflict injuries than a cricket ball. They are also much cheaper and more readily available than a leather cricket ball and are easier to hit due to their slower air-speed and relative lightness. Tennis balls also bounce more than normal cricket balls, especially at low speeds. The pitch can be any stretch of ground that is reasonably flat. The wicket may be any convenient object - a chair, a cardboard box, a set of long twigs or sticks, a rubbish bin, tree or a drawing on the wall. Often, the wicket is by no means close to the official size, but it is used anyway. A wicket at the non-striker's end is generally a single stump if proper stumps are available and in the absence of larger objects may be just a hat or a shoe. Its main purpose is to mark the bowler's crease, but can be instrumental when there are two batters and one may be run out.

Garden cricket in the UK is considered by many to be the pinnacle event of social and sporting excellence in the summer period. Many games are paired with a barbecue which often has a carnival atmosphere.

Backyard cricket rules change constantly. Often they are made up on the spot. As always with informal games, it is the unspoken rules that are most important: these are usually that all participants should have a reasonable chance to play a part regardless of age, gender, or skill level, and that no-one should be injured. Typical examples of the less important but explicit rules for a particular game include:

Another variation on this rule is the ability of the bowler to at certain stages throughout the game bowl two balls in one hand at the batsman on strike. This tactic is usually employed under the same circumstances as the above ruling

Sixes and Fours vary based on the surroundings but generally they are as follows: Fence on the bounce is 4, on the full is 6, over the fence is 6 and out. Far side of the road is 4, on the full is 6. If it goes too far down or over the road its six and out. The roof is 6 and out. Cars and caravans are out with no score. The house/shed is 4 on the bounce, 6 on the full. The windows though are out, no score. If the ball is lost in the bushes/scrub local rules apply. The batsman may keep running indefinitely, but more often a maximum number of runs would be agreed upon before he helps search, or he may join in the search immediately. A token four runs may be added. This is called 4 declared or simply 4D. Bushes/fences closer than the boundary line or 4D are sometimes declared as 2 declared or 2D

Within a given game, rules are often interpreted in varying ways, or added to as the game progresses. A younger child that benefits from the "first ball rule" but goes out to the second ball also might discover that there is now, by unspoken consensus, a "second ball rule" as well, and if necessary a "third ball rule".

The scoring system is sometimes modified, with rules such as "12 and Out" or "8 and Out" an event that occurs when a player hits the ball a great distance, possible over the road or into the ocean, depending on the location of the game. Sometimes, the "Aggregate Rule" is played, meaning that a player receives the runs from a boundary as well as any runs they claim during the chase and retrieval of the ball. This allows for scores such as fives and sixes (without getting out).

In some parts of the world, backyard cricket (and other similar games) is one of the very few truly child-like activities that modern adults may participate in without attracting social stigma, and one of the dwindling number of adult activities that are accessible to children.

In India, Pakistan, Sri Lanka, Bangladesh, Afghanistan, and Nepal it is also known as galli cricket, which translates into street cricket (the word gully is the English variant adopted by British colonizers during the British Raj). Inner-city youths in large South Asian cities including Karachi, Mumbai, and Colombo enjoy gully cricket in their freetime and it is often played as an extremely competitive game with players often having raging emotions. It is played in a similar regard to outdoor half-court basketball in the United States and backyard rugby in Australia and New Zealand. Often, children improvise on specific rules and use objects found in the environment to serve as tools, such as trash cans and dumpsters for wicket stumps. One famous example of this is the electric-taped tennis ball which was originally improvised by children in the inner-city neighborhoods of Karachi as a means to make a tennis ball less bouncy and heavier to closely emulate a real cricket ball; the tape can also be used to create a seam on the ball. This method soon spread to other regions of the world.

Another variation on this rule is if the first ball a batter faces is deemed as unreachable (Off the pitch for example) The bowler is then obliged to bowl another ball in which the batsman is unable to be dismissed from. This rule continues until the bowler bowls a ball considered legal

Play on an actual EBBO can be achieved either by using the flat strip of hard-packed EB along the surf line as the pitch, or by only "bowling" gentle full tosses to avoid the problem of the ball not bouncing off loose sand. If there are no true stumps available a bin, deckchair, boogie board or cool box may be used.

In beach cricket the creases and the boundary are normally drawn in the sand in a line which extends well past the side of the agreed pitch to prevent them becoming obliterated in the first over. The batsmen will frequently redraw the line. Sometimes, play is shifted along the beach to a new pitch as the packed sand of the original pitch is turned up, thus reducing the standard of or even completely disabling bowling.

The tide plays a big part in the standard of the pitch in beach cricket. During low tide, the pitch tends to be on the semi-wet sand, and is deemed superior than cricket played in high tide (when the pitch is on dryer, looser sand). In particularly long matches, the play will shift up and down the beach depending on the tide.