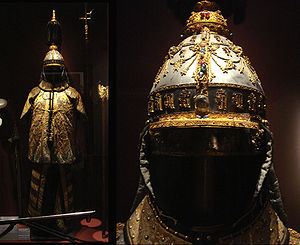 China has a long history of armour and weapons development. China has many varieties of armour, but the most were of the lamellar, coat of plates, brigandine and scaled varieties.

Initially, armour was exclusively for nobles. The earliest known armour used by the warriors of the Shang dynasty was light plated armour made from turtle shells tied together with cords. Later, bronze and leather armour was introduced, and simple one-piece breastplates, coat of plates and lamellar cuirasses began to appear. Most of these were highly elaborate and decorated, and were often very heavy. The majority of noblemen fought mounted on war chariots, so the weight of the armour was not a major factor in its construction.

After the defeat of the Shang, the Zhou Dynasty used many weapons and types of equipment that originally came from the Shang. However, the Zhou incorporated some of their own different styles of armour. One type was the gé jiǎ (革甲), a sleeveless coat of animal hide formed on a wooden dummy. The hide used was of buffalo and rhinoceros. Because of the disappearance of the rhinoceros in the region, buffalo came to be most common material. Another type of armour used by the Zhou was the wei jia, made of boiled leather with a fabric backing. Red lacquer was often used to form a protective layer for most armour used by the Zhou.

Chariots were used extensively during the Spring and Autumn Period. The chariots were mainly used as a shock weapon and a platform for archers. Since the chariot was restricted to flat terrain, charioteers could be defeated when battling well-organized infantry. Shang chariots were often drawn by two horses; later, the Zhou introduced a four-horse chariot. The crew of the chariot was made up of noblemen, so all would have worn armour.

Zhou chariots were protected by leather, and sometimes came with a canopy to protect the crew from the weather, but this was probably removed before going into battle. Chariot horses were protected by a blanket made of animal skins, with tiger skin being most popular, though sometimes horses wore lamellar peytral made of leather, which protected the horses' chests and necks. Chariot use declined during the Warring States Period, probably because of the introduction of the crossbow and cavalry. 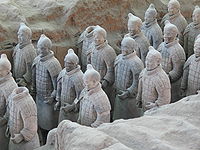 Soldier statues of the Terracotta Army, Qin Dynasty, 210 BC

Most of the kingdoms of the Warring States maintained large armies, numbering anywhere from 30,000 to 100,000. With the technology and resources of the time, it was not possible to provide all soldiers with armour. Armour was most common for wealthier or higher ranked soldiers. During the Warring States era, most armour was made of leather or bronze (occasionally iron), or a combination of both. The metal that was used most for military purposes was bronze. Wrought iron (pure iron) began to appear in the 5th century BC, but did not begin to replace bronze until the 2nd century BC.

Most infantrymen wore lamellar or coat of plates cuirasses. The lamellar cuirass worn by these men was made of hundreds of small overlapping metal and/or leather plates laced together to make a flexible and light coat of armour. Coat of plates consisted of hundreds of small non-overlapping metal or leather plates stitched or riveted together. Shoulder guards and helmets were often used, but leather caps seem to have been more common for ground infantry. 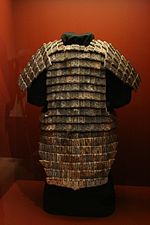 Stone armour excavated from the Mausoleum of the First Qin Emperor

During much of the Warring States period, most light cavalry units served as skirmishers - thus armour for cavalry was rare, as it was not seen as necessary. Armour for heavier cavalry tended to be lighter than that of the infantry. Cavalry armour was usually constructed entirely of leather, and lacked shoulder protection. However, during the late Warring States era and the dynasties succeeding it, cavalry armour gradually become heavier and more elaborate. (i.e. Heavy Cavalry with full body protection for both rider and horse, ranging from coat of plates to lamellar from the Han Dynasty or elaborate interlocking triangular scales from the Tang and Song Dynasty) 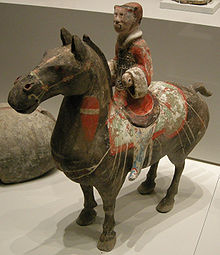 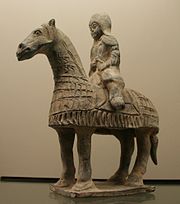 Most evidence for armour development during this period comes from the Terracotta Warriors of Qin Shi Huang. Some terracotta warriors wore no armour; it is suggested that most were conscripts playing the role of skirmishers or support troops for the chariots. They are armed with crossbows and were usually placed at the front of formations. Because of the early use of crossbow technology, these conscripts may not have need armour for close fighting, instead adapting more mobile tactics similar to rifle or musket shooting by rows. Of the terra cotta warriors thus uncovered, Pit 1 has approximately 61 percent of the soldiers wearing armour, Pit 2 over 90 percent, and pit 3, being in a command compound, 100 percent.

Traces of black paint on these figures suggest that the Qin may have used black lacquered plates to form coat of plates and lamellar for their armour. Many different styles of armour were found, but examples of armours from ancient China are rare. Qin Shi Huang ordered weapons, and probably armour too, to be destroyed by fire. This is likely the reason that so few examples of ancient armour exist today.

After the fall of the Qin in 207 BC came the rise of the Han Dynasty in 202 BC. During the Han Dynasty, new style of armour such as scale corselet made of leather and/or iron were adopted. During this time period, the primary metal used in armour was iron, and occasionally steel. Early Han soldiers would have used armour and weapons produced during the Qin era. The Western Han army had armour standardized to meet the need. Armour used by the Han included coats of plates; liang-tang, or "double-faced" armour; and lamellar cuirases made of metal or leather that was suspended over the shoulders by cords. This armour was used by both the infantry and the cavalry. A much heavier and more expensive version, consisting of metal plates laced together, was worn by officers.

Shields were used by both infantry and cavalry. These shields were usually made of wood and often reinforced by a metal centre and rim.

Armour for horses began to appear around the end of the Han dynasty, but the earliest armour yet found dates to the year 302 AD. During the Three Kingdoms Period, fully armoured cavalry (armour covering both the rider and horse) were extensively used as shock troops. Early horse armour came in one piece, but later horse armour came in multiple pieces: chanfron (head protector); neck guards; chest guards; shoulder guards; flank pieces; and crupper. Most cavalry served as mounted archers, and sometimes removed their arm protection to use their bows or crossbows.

A diagram of the Chinese mountain-scale armour type. 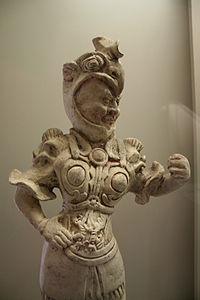 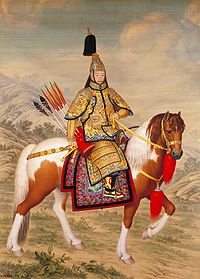 Elaborate ancient Chinese armour development includes the Shan Wen Kai or "Mountain pattern armour". It began to appear during the Tang dynasty and was further perfected during the Song dynasty. It is made from a multitude of small pieces of steel that are vaguely shaped like the Chinese character for the word shan (Mountain). This would thus explain its name. The pieces are then interlocked and riveted to a cloth or leather backing. It effectively covers the torso, the shoulders and the thighs while remaining comfortable and flexible enough to allow movement. Also during this time to the early Ming Dynasty, Chinese officers used plate armour, which were culturally decorated, for "important" body parts instead of covering their whole body since too much plate armour hinders their martial arts movement. The "Other" body parts were covered in cloth, leather, lamellar, and/or Mountain pattern. This overall design was called "mingguangjia."[citation needed]

Mail armour was introduced to China when its allies in Central Asia paid tribute to the Tang Emperor in 718 by giving him a coat of "link armour" assumed to be chainmail. China first encountered the armour in 384 when its allies in the nation of Kuchi arrived wearing "armor similar to chains". Once in China mail was imported, with the main source being Persia, but was not produced widely. It was typically the armour of high-ranking guards and those who could afford it rather than the armour of the rank and file, who used the more familiar, easier to produce, and less laborious to maintain brigandine and lamellar armours. These armour types better suited the needs of the Chinese, who had to produce large quantities of armour quickly for their forces in instances of rebellion or external strife.

By the 19th century, most armour was worn mainly for ceremonial purposes and was an indicator of rank. The kind of armour that was largely used was the brigandine, a type of armour consisting of a leather or cloth garment lined with metal plates inside. Sometimes, the plates were made in different sizes and shapes to maximize protection. The Chinese brigandine comes in five pieces: the vest, pauldrons, skirting, underarm, and groin section. By contrast, the Korean version of this armour is a single piece. Brigandines were first seen in China and Korea in the 12th century AD and were used up to the 19th century. Armour use began to decline after the introduction of firearms, but shields continued to be used. Most Chinese soldiers of the times went without armour of any kind and mostly wore civilian-style clothing. 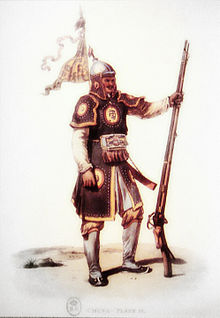 There are two common Chinese translations for "armour:" 甲 (jiǎ) and 鎧/铠 (kǎi). Kǎi, includes the generic character for "metal", (金) as its radical, while jiǎ does not, thus implying that jiǎ was not made of metal. Jiǎ itself comes from guījiǎ (龟甲), meaning "tortoise shell" or "ancient armour".