The Haunt of Fear

The Haunt of Fear

The Haunt of Fear was a bi-monthly horror comic anthology series published by EC Comics in 1950.[1] Along with Tales from the Crypt and The Vault of Horror, it formed a trifecta of popular EC horror anthologies. The Haunt of Fear was sold at newsstands beginning with its May/June 1950 issue. It ceased publication with its November/December 1954 issue, compiling a total of 28 issues.

In 1950, publisher Gaines and his editor, Al Feldstein, discovered they shared similar tastes in horror. They began experimenting with horror tales as features in their existing titles, such as Crime Patrol. The first issue of Haunt of Fear was a title change from an EC Western comic book series, Gunfighter. It was numbered where Gunfighter ended, #15. In the early 1950s comic book publishers, seeking to save money on second-class postage permits, frequently changed the titles of their comics, rather than start new ones. The numbering was reset after issue 17. This was explained in the letter column of issue #4. "After publishing issues 15, 16 and 17, the United States Post Office requested that the fourth issue actually be numbered No. 4 rather than No. 18... Well, 'ya can't fight City Hall!'"[2] The EC war comic Two-Fisted Tales took over the numbering, starting with issue #18, and never ended up resetting its numbering.

Artist Graham Ingels took over the art duties of the Haunt of Fear starting with issue #4. He became the Old Witch's primary artist for the remainder of the comic's run, though his art had been appearing since the second issue. Ingels would take over the cover duty with issue #11, in February 1952. Other artists who contributed to the title were Feldstein, Johnny Craig, Wally Wood, Harvey Kurtzman, Jack Davis, George Roussos, Harry Harrison, Joe Orlando, Sid Check, George Evans, Reed Crandall, Jack Kamen and Bernard Krigstein. Ingels' artwork on the eight page lead stories, and his splash pages, particularly on issues #14 and 17, set a new standard for horror illustration. These have rarely if ever been equaled since.

"Poetic Justice", in the twelfth issue, was adapted for the 1972 Tales From the Crypt film from Amicus Studios, in England. The movie starred Peter Cushing as the kindly old junk collector. Ingels drew "Wish You Were Here" from Haunt #22. It was also adapted for film. "Horror We? How's Bayou?" in issue #17 is considered by many E.C.'s best drawn horror story ever. Perhaps it is the best by anyone, in any era. The homicidal maniac's creepy visage was taken from an old movie still of the silent film, Dr. Jekyll and Mr. Hyde (1920 film), which starred John Barrymore. The story artwork won an award as best E.C. horror art at the 1972 E.C. Fan-Addict Convention.

Gaines and Feldstein were responsible for writing all of the stories until the end of 1953. An unauthorized adaptation of Ray Bradbury in another one of EC's comics. eventually led to a series of authorized Bradbury adaptations. Features included "Grim Fairy Tales", horror based parodies of well known fairy tales such as Sleeping Beauty and Hansel and Gretel. The parodies began appearing in issue #15, in 1952.

The title's most controversial story was "Foul Play" (#19, 1953). It was written by Feldstein and drawn by Davis. It featured a crooked baseball player being dismembered, with his body parts used to play baseball by his murderers. The story was singled out by Robert Warshow in his 1954 essay "Paul, the Horror Comics, and Dr. Wertham". He described it as "the outer limits of ... 'good taste'."[3] It was also one of many examples used by Fredric Wertham in his book Seduction of the Innocent.[4] Author Grant Geissman used the title of the story for his book on EC artists, Foul Play (2005).

As with the other EC comics edited by Feldstein, the stories in this comic were primarily based on Gaines reading of a large number of horror stories and using them to develop "springboards" from which he and Feldstein could launch new stories. Specific story influences that have been identified include the following:

After their unauthorized adaptation of one of Ray Bradbury's stories in another magazine, Bradbury contacted EC about their plagiarism of his work. They reached an agreement for EC to do authorized versions of Bradbury's short fiction. These official adaptations include: 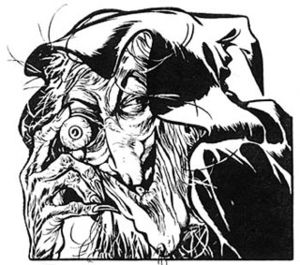 The Old Witch as rendered by Graham Ingels.

Although EC's horror stable consisted of three separate magazines, there was little beyond their titles to distinguish between them. Each magazine had its titular host, but the hosting duties for any one issue were typically shared with the hosts of the other two. Thus, a single issue of The Haunt of Fear would contain two stories told by the Old Witch, one by the Crypt-Keeper (of Tales from the Crypt) and one by the Vault-Keeper (of The Vault of Horror). The professional rivalry between these three GhoulLunatics was often played for comic effect.

The Old Witch was the last to make her appearance. The first issue of The Haunt of Fear had no host. The second issue debuted The Witch's Cauldron feature, with the Old Witch introducing herself in a story drawn by artist Jack Kamen. The third issue featured a Craig cover depicting three GhoulLunatics stepping out of doorways and launched a letter column, "The Old Witch's Niche." Thereafter, the Old Witch presided over the magazine as its comedic horror host, delivering an irreverent and pun-filled commentary to lighten the horrific tone of the stories she introduced. In spite of her slow start, the Old Witch would prove to be the most visible of the GhoulLunatics in their initial run. Not only did she appear in virtually every issue of The Haunt of Fear, Tales From The Crypt and The Vault of Horror, she also appeared in the final story of Crime SuspenStories in every issue from #3 through #16.

The character of the Old Witch was inspired by Old Nancy, the witch of Salem, host of Alonzo Deen Cole's radio series, The Witch's Tale, which aired from 1931 to 1938 on WOR and Mutual, and in syndication. The Old Witch's own account of her origin may be found in The Haunt of Fear #14's "A Little Stranger!" which details the circumstances surrounding her birth.

In 1954, Gaines and Feldstein intended to add a fourth book to their horror publications by reactivating an earlier title, The Crypt of Terror. They were stopped dead in their tracks, however. Horror and other violent comics had come under scrutiny by parents, schoolteachers, clergymen, psychologists and others, who viewed the material as dangerous to the well-being of children. They believed comic books were a significant contributor to the juvenile delinquency crisis in America. Matters came to a head in April and June 1954 with a highly publicized Senate Subcommittee on Juvenile Delinquency. Hearings targeted violent comic books, which fared poorly in the proceedings. While the committee stopped short of blaming the comics industry for juvenile delinquency, they did suggest it tone down the product. Publishers were left reeling.

The industry deftly avoided outside censorship by creating the self-regulatory Comics Magazine Association of America (CMAA) and a Comics Code Authority (CCA) that placed severe restrictions on violent comic book genres. Publishers were forbidden from using the words "terror" and "horror" in titles. They were forbidden from depicting zombies, werewolves, gruesome characters and outrè horror fiction trappings. Gaines was fed up; he believed his titles were being specifically targeted and realized they were doomed to future failure. He cancelled The Haunt of Fear and its companion titles in September 1954. The last issue of Haunt was #28, November/December 1954. Since an issue of The Crypt of Terror had already been produced, it was published as the final issue of Tales from the Crypt, February/March, 1955.

The Haunt of Fear has been reprinted on numerous occasions. Ballantine Books reprinted selected Haunt stories in a series of paperback EC anthologies in 1964-66. The magazine was fully collected in a series of five black-and-white hardbacks by publisher Russ Cochran as part of The Complete EC Library in 1985. In 1990/91, Cochran (in association with Gladstone Publishing and solo) reprinted a handful of color issues. Between November 1992 and August 1998, Cochran and Gemstone Publishing reprinted the full 28 individual issues. This complete run was later rebound, with covers included, in a series of six softcover EC Annuals. Cochran Publishing and Gemstone Publishing planned to publish hardcover, re-colored volumes of The Haunt of Fear as part of the EC Archives series, but Gemstone's financial troubles left this project in limbo. But the project may soon be revived under a new publisher. GC Press LLC, a boutique imprint established by Russ Cochran and Grant Geissman, announced in a press release dated September 1, 2011 that it is continuing the EC Archives series, with The Haunt of Fear Volume 1 scheduled for November 2011 release.[5]

Stories from The Haunt of Fear were adapted for the movie version of Tales From the Crypt as well as the TV series.

Bill Gaines owned one of sculptor Steve Fiorilla's latex masks of the Old Witch. In the second season of HBO's Tales from the Crypt anthology television series, a photo of this Old Witch mask was a prop. This was in the June 26, 1990 "Korman's Kalamity" episode, adapted from the EC story "Kamen's Kalamity." Illustrated by Jack Kamen, the original self-satirical story is set in EC's offices, where the EC editors have a meeting with Kamen about his artwork.

The Old Witch appeared in animated form on Tales from the Cryptkeeper, and was voiced by Elizabeth Hanna.