Tales from the Crypt (comics)

Tales from the Crypt (comics)

Tales from the Crypt, The Haunt of Fear and The Vault of Horror are three bi-monthly horror comic anthology series published by EC Comics in the early 1950s. Tales from the Crypt hit newsstands with its October/November 1950 issue (#20) and ceased publication with its February/March 1955 issue (#46), producing a total of 27 issues (excluding the initial three issues, #17-19, published under the title The Crypt of Terror). The title was popular, but in the late 1940s and early 1950s comic books came under attack from parents, clergymen, schoolteachers and others who believed the books contributed to illiteracy and juvenile delinquency. In April and June 1954, highly publicized Congressional subcommittee hearings on the effects of comic books upon children left the industry shaken. With the subsequent imposition of a highly restrictive Comics Code, EC Comics publisher Bill Gaines canceled Tales from the Crypt and its two companion horror titles, along with the company's remaining crime and science fiction series in September 1954. All EC titles have been reprinted at various times since their demise, and stories from the horror series have been adapted for television and film. 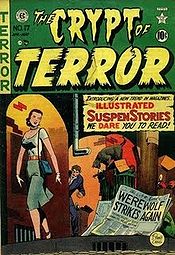 In 1950, publisher Gaines and his editor Al Feldstein discovered they shared similar tastes in horror and began experimenting with horror tales in their crime titles. Tales from the Crypt traces its origin to a Feldstein story, "Return from the Grave!", in EC's Crime Patrol (#15, December 1949/January 1950) with the Crypt-Keeper making his debut as host. Issue #16 featured more horror tales than crime stories, and, with issue #17, the title changed from Crime Patrol to The Crypt of Terror. Due to an attempt to save money on second-class postage permits, the numbering did not change with the title and continued as The Crypt of Terror for the next two issues. The title saw its final form, Tales from the Crypt, with issue #20, October/November, 1950.

Early front covers were created by Feldstein, Johnny Craig and Wally Wood, with the remaining covers (1952–55) by Jack Davis. The contributing interior artists were Craig, Feldstein, Wood, Davis, George Evans, Jack Kamen, Graham Ingels, Harvey Kurtzman, Al Williamson, Joe Orlando, Reed Crandall, Bernard Krigstein, Will Elder, Fred Peters and Howard Larsen. Jack Davis took over the art for the Crypt-Keeper stories with (#24, June/July, 1951), and continued as the title's lead artist for the rest of the run. Feldstein devised the Crypt-Keeper's origin story "Lower Berth!" (#33) which was illustrated by Davis. Issue #38 was one of two covers from EC's horror comics censored prior to publication. While The Vault of Horror cover for issue #32 was restored in Russ Cochran's EC Library reprints, the Tales from the Crypt cover remained censored. "Kamen's Kalamity" (#31) starred many members of the EC staff, including Gaines, Feldstein and the story's artist, Kamen. Ingels, Davis and Craig also made cameo appearances in the story in single panels which they drew themselves.

As with the other EC comics edited by Feldstein, the stories in this comic were primarily based on Gaines reading a large number of horror stories and using them to develop "springboards" from which he and Feldstein could launch new stories. Specific story influences that have been identified include the following:

After their unauthorized adaptation of one of Ray Bradbury's stories in another magazine, Bradbury contacted EC about their plagiarism of his work. They reached an agreement for EC to do authorized versions of Bradbury's short fiction. These official adaptations include:

Although EC's horror stable consisted of three separate magazines, there was little beyond their titles to distinguish between them. Each magazine had its titular host, but the hosting duties for any one issue were typically shared with the hosts of the other two. Thus, a single issue of Tales from the Crypt would contain two stories told by the Crypt-Keeper, one by the Vault-Keeper (of The Vault of Horror) and one by the Old Witch (of The Haunt of Fear). The professional rivalry between these three GhouLunatics was often played for comic effect.

The Crypt-Keeper was the primary host of Tales from the Crypt. He was introduced to the public in Crime Patrol #15, and he continued with that magazine through its changes in title and format. He was a frightening presence in those early issues, a sinister hermit sitting framed in the lightless crypt's half-open door, his face all but hidden by the double curtain of his long white hair. But he soon evolved into a more comedic horror host, delivering an irreverent and pun-filled commentary to lighten the horrific tone of the stories he introduced. Later he served as the host of EC's 3-D comic book, Three Dimensional Tales from the Crypt of Terror.

The Crypt-Keeper's duties were not limited to hosting. He would occasionally appear as a character as well, and these appearances give the reader a glimpse of his biography. "The Lower Berth" (Tales from the Crypt #33) gives an account of the circumstances surrounding his birth. "While the Cat's Away" (The Vault of Horror #34) conducts a tour of his house above and below ground. "Horror beneath the Streets" (The Haunt of Fear #17) tells how he and his fellow GhouLunatics got their EC publishing contracts.

In 1954, Gaines and Feldstein intended to add a fourth book to their horror publications by reactivating an earlier title, The Crypt of Terror. They were stopped dead in their tracks, however. Following the publication of Fredric Wertham's Seduction of the Innocent , horror and other violent comics had come under scrutiny by parents, schoolteachers, clergymen, psychologists, and others who viewed the material as dangerous to the well-being of children and a significant contributor to the juvenile delinquency crisis in America. Matters came to a head in April and June 1954 with a highly publicized Senate Subcommittee on Juvenile Delinquency. Hearings targeted violent comic books—which fared poorly in the proceedings. While the committee stopped short of blaming the comics industry for juvenile delinquency, they did suggest it tone down the product. Publishers were left reeling.

The industry deftly avoided outside censorship by creating the self-regulatory Comics Magazine Association of America (CMAA) and a Comics Code Authority (CCA) that placed severe restrictions on violent comic book genres. Publishers were forbidden from using the words "terror" and "horror" in titles, for example, and forbidden from depicting zombies, werewolves, and other gruesome characters and outrè horror fiction trappings. Gaines was fed up; he believed his titles were being specifically targeted and realized they were doomed to future failure. He threw in the towel, canceling Tales from the Crypt and its companion titles in September 1954. Since an issue of The Crypt of Terror had already been produced, it was published as the final issue of Tales from the Crypt, February/March, 1955.

Tales from the Crypt has been reprinted on numerous occasions. Ballantine Books reprinted selected Crypt stories in a series of paperback EC anthologies in 1964-66. The magazine was fully collected in a series of five black-and-white hardbacks by publisher Russ Cochran as part of The Complete EC Library in 1979[1]. Cochran (in association with Gladstone Publishing and solo) reprinted a handful of single color issues in 1990/91. Between September 1992 and December 1999, Cochran and Gemstone Publishing reprinted the full 30 individual issues. This complete run was later rebound, with covers included, in a series of six softcover EC Annuals. In 2007, Cochran and Gemstone began to publish hardcover, re-colored volumes of Tales from the Crypt as part of the EC Archives series. Three volumes (of a projected five) were published before Gemstone's financial troubles left the project in limbo. But the project may soon be revived under a new publisher. GC Press LLC, a boutique imprint established by Russ Cochran and Grant Geissman, announced in a press release dated September 1, 2011 that it is continuing the EC Archives series, with the first new releases scheduled for November 2011.[2]

The 1972 movie features five stories from various EC comics. "Reflection of Death" (#23) and "Blind Alleys" (#46) were adapted for the movie. In 1989, the book was adapted into the TV series Tales from the Crypt, which features John Kassir as the Cryptkeeper and included comic book covers designed to look like the original 1950s covers by Mike Vosburg with at least one drawn by Shawn McManus.

In 1996, another adaptation (a Saturday morning game show) called Secrets of the Cryptkeeper's Haunted House ran from September 14 to August 1997, with Kassir once again in the role of the Cryptkeeper as announcer.

Two movies, Demon Knight (1995) and Bordello of Blood (1996), were based on the series, neither of which was particularly successful. A third movie, Ritual, was slated for theatrical release in 2001, but was only distributed internationally (without the Tales from the Crypt connection) until 2006 when it was released on DVD in the United States, with the Cryptkeeper bits restored.

In 2007, Papercutz, an independent comics publisher managed by former Marvel Comics editor Jim Salicrup, began running a new series of original Tales from the Crypt comics. The new version was announced at the year's New York Comic Con. The first issue was published in June 2007, with a cover drawn by Kyle Baker. All three of EC Comics' horror hosts (The GhouLunatics) appear in the issue, drawn by Rick Parker (artist of Marvel/MTV's Beavis and Butt-Head Comic Book). Contributors to subsequent issues have included well-known horror talents Joe R. Lansdale and his brother John L. Lansdale, Don McGregor, husband and wife team James Romberger and Marguerite Van Cook, Mort Todd, and Chris Noeth. The new version has a smaller digest size with a graphic novel style book binding. Controversy erupted in 2008 when Vice Presidential candidate Sarah Palin was featured on a cover attacking the horror hosts with a hockey stick, published with a letter from William Gaines' daughter Cathy Gaines Mifsud commenting on censorship.