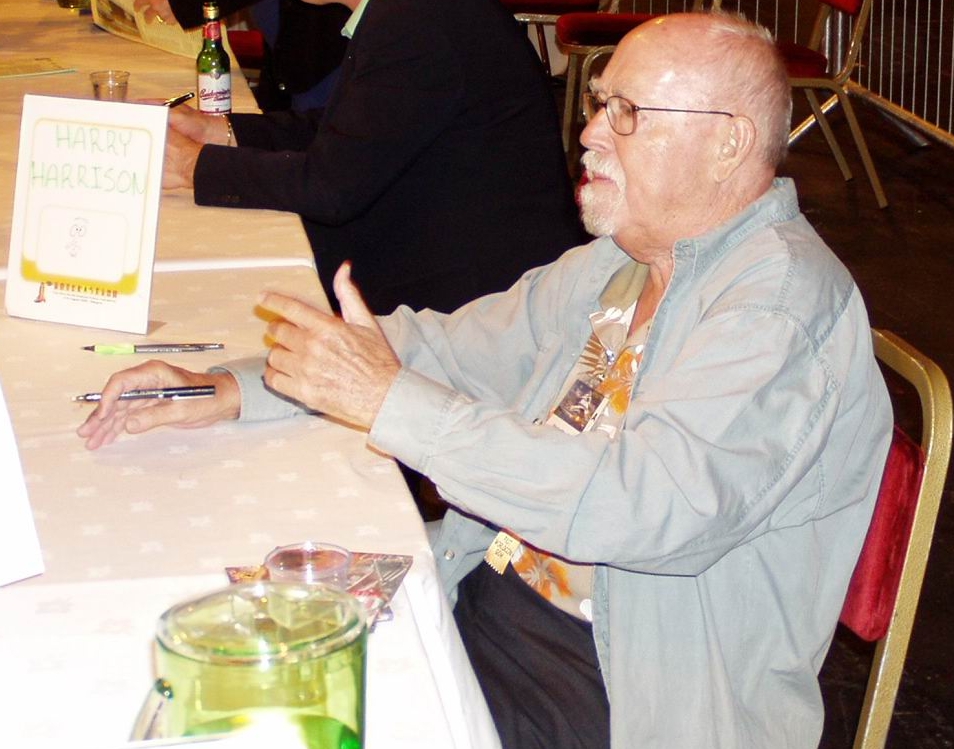 Before becoming an editor, Harrison started in the science fiction field as an , notably with ' two science fiction comic books, "" and "Weird Science". A large number of his early short stories were first published under house pseudonyms such as 'Wade Kaempfert'. Harrison also wrote for syndicated comic strips, creating the 'Rick Random' character. Harrison is now much better known for his writing, particularly his humorous and satirical science fiction, such as the "" series and the novel "" (which satirises 's "").

During the 1950s and 60s he was the main writer of the newspaper strip. One of his Flash Gordon scripts was serialized in magazine. Harrison drew sketches to help the artist be more scientifically accurate, which the artist largely ignored.

Not all of Harrison's writing is comic, though. He has written many stories on serious themes, of which by far the best known is the classic novel about overpopulation and consumption of the world's resources "" which was used as a basis for the science fiction film "" (though the film changed the plot and theme).

Harrison for a time was closely identified with and the pair collaborated on a series of anthology projects. Harrison and Aldiss did much in the 1970s to raise the standards of criticism in the field.

In 1990 Harrison was professional Guest of Honour at , the 48th World SF Convention, in The Hague, Netherlands, together with Joe Haldeman and Wolfgang Jeschke.

Harrison is a writer of fairly liberal worldview. Harrison's work often hinges around the contrast between the thinking man and the man of force, although the "Thinking Man" often needs ultimately to employ force himself.

Harrison was selected by the as the 2009 recipient of their [ [http://www.sfwa.org/news/2008/09grandmaster.htm Harry Harrison named SFWA Grand Master ] ] .

Harrison was born in , but has lived in many parts of the world including , , , and . He is an advocate of (the language often appears in his novels, particularly in his Stainless Steel Rat and Deathworld series) and was formerly the honorary president of the Association of , as well as holding memberships in other Esperanto organizations such as Esperanto-USA (formerly the Esperanto League for North America), of which he is an honorary member, and the Universala Esperanto-Asocio (), of whose Honorary Patrons' Committee he is a member. He served in the during WWII as a gunsight mechanic and gunnery instructor. He currently lives in the and maintains a flat in for visits to .

*"" and "" (1974) These two linked novellas, featuring interstellar intelligence agents, were comedy-drama take-offs on . The first tells of an agent of the "Porcine Interstellar Guard", who performs his missions with the help of several pigs.
*"" (1978) published as a large format book with colour illustrations by

On the planet Pyrrus, human colonists have fought a centuries-old war with the native life forms. These enemies adapt to human tactics and technology, evolving new species so rapidly that natives returning from even brief trips offplanet must be carried in protective armor canisters from their ship to the safe buildings, where they will learn of the latest deadly threats.

The first three stories were initially published as serials in under the names given below.

*"" (1960) Jason dinAlt, interplanetary gambler with a touch of ability, is hired to rapidly multiply the Pyrrans' cash, so that they can buy new and better weapons and raw materials. Having won big, he must flee with the Pyrrans, and learns not only to survive on their planet, but also the secret behind the evolutionary war . . .and that's just the first half of the book . . .
*"Deathworld 2" (1964) (first published as "The Ethical Engineer") dinAlt, kidnapped by a religious fanatic, finds himself shipwrecked (with the fanatic) on a world which has a mixed bag of technological levels . . .unfortunately, not including spaceflight.
*"Deathworld 3" (1968) - (first published as "The Horse Barbarians") The Pyrrans field a task force to another planet, going undercover to help stabilize the planet in the face of violent, nomadic raiders.
*"The Deathworld Trilogy" (1974, omnibus of "Deathworld", "Deathworld 2" & "Deathworld 3". vt. "The Deathworld Omnibus")
*"The Mothballed Spaceship" (1973) - short story, in "ASTOUNDING: the Memorial Anthology" Invaders are approaching a planet long past its glory -- Earth, believed by some to be the birthplace of mankind. The Terran military has found a huge battlecruiser in space, but the ship's computer won't let them come close, so they turn to the Pyrrans for help. "This was the only one of the original stories not to be reviewed by Campbell"
*"Return to Deathworld" (1998, fully written by Ant Skalandis) - Published only in Russian, Lithuanian and Czech
*"Deathworld vs. Filibusters" (1998, fully written by Ant Skalandis) - Published only in Russian, Lithuanian and Czech
*"The Creatures from Hell" (1999, fully written by Ant Skalandis) - Published only in Russian, Lithuanian and Czech
*"" (2001, fully written by ) - Published only in Russian

To the Stars trilogy

The Hammer and the Cross series