The Legend of Hell House

The Legend of Hell House 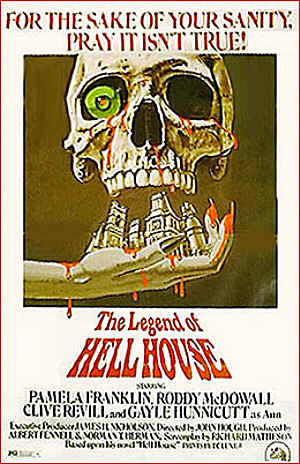 "The Legend of Hell House" is a 1973 horror film by . It was directed by and stars , , and . The screenplay was written by based on his own novel "Hell House".

Physicist Lionel Barrett is enlisted by an eccentric millionaire, Mr Deutsch, to make an investigation into "survival after death" in "the one place where it has yet to be refuted". This is the Belasco House: the " of haunted houses," originally owned by the notorious "Roaring Giant" Emeric Belasco, a six-foot-five perverted millionaire and supposed murderer, who disappeared following a massacre at his home. The house is believed to be haunted by numerous spirits; the victims of Belasco's twisted desires.

Accompanying Barrett are his wife, Ann, as well as two mediums: a mental medium and Spiritualist minister, Florence Tanner, and a physical medium, Ben Fischer, who is also the sole survivor of an earlier investigation. The rationalist Barrett is rudely skeptical of Tanner's Christian faith and spiritual beliefs, asserting that there is nothing but unfocused energy in the house. Barrett brings a machine he has developed, which he believes will rid the house of any paranormal presence or force.

Though not a physical medium, Tanner begins to manifest physical phenomena inside the house. When, after a quarrel with Tanner, Barrett is attacked by an invisible force, he suspects that Tanner may be harnessing the house's energy against him. Meanwhile Fischer remains aloof, with his mind closed to the house's influence, and is only there to collect the generous pay offered him to return.

Tanner, convinced that one of the "surviving personalities" is Belasco's tormented son Daniel, finds a human skeleton, chained up behind a wall. Believing it to be Daniel's, Tanner and Fischer bury the bones outside the house, and Tanner conducts a funeral. Despite this, Daniel's personality continues to haunt Tanner; she is violently scratched by a possessed cat and Barrett, seeing the scratches, suspects that Tanner may be mutilating herself. In an attempt to put the supposed Daniel to rest, Tanner gives herself to the entity sexually, and later appears to be possessed herself, temporarily.

Barrett's machine is assembled. Tanner attempts to destroy it, thinking that it will harm the spirits in the house, but is prevented. She enters the , the unholy heart of the house, in an attempt to warn the spirits, and is crushed by a falling . (In her dying moments, she leaves a clue written in her own blood, to the true source of the haunting, which she now knows.) Barrett meanwhile activates his machine, which seems to be effective. Finally opening up his psychic abilities as he wanders the house, Fischer declares the place "completely clear!" in astonishment. However, soon afterwards, violent psychic activity resumes and Barrett is killed.

Fischer decides to finally confront the house, with Ann accompanying him despite her misgivings. In the chapel, a confrontation ensues: Fischer deduces that Belasco is the sole entity haunting the house, masquerading as many. He taunts Belasco, declaring him a "son of a whore", and that he was no "roaring giant", but likely a "funny little dried-up bastard" who fooled everyone about his alleged height. Even as objects begin to hurl themselves at Fischer, he continues to stand up to the entity, until all becomes still, and a portion of the chapel wall shatters, revealing a hidden door.

Going inside, Fischer and Ann discover a lead-lined room, containing Belasco's preserved body seated in a chair. Pulling out a pocketknife, Fischer rips open Belasco's trouser leg, discovering his final secret: a pair of prosthetic legs. Fischer and Ann realize Belasco had had his own stunted legs amputated, and used the prosthetics in a grotesque attempt to appear imposing. Belasco had built the room specially, in the event of his death, to preserve his spirit, afraid of what may happen otherwise.

With the room now open, Fischer activates Barrett's machine a second time, and he and Ann leave the house, expressing hopes that Barrett and Tanner will guide Belasco to the without fear.

Production began on , . "The Legend of Hell House" is one of only two productions of after his departure from &mdash; a company he had run, along with , since . Nicholson died of a brain tumour in December, 1972, before the film's release in June, . The external shots of the house were filmed at , East . Nicholson's company, Academy Pictures Corporation, also released "" through in 1974.

Matheson's screenplay drastically toned down some of the more graphic elements of the novel, particularly the sexuality.

The film features an score and sound effects created by and recorded at Hodgson's Electrophon studio in London. The soundtrack is currently unavailable commercially.

* In the original novel, the house was located in , in the , while the investigative team is made up of Americans.

*Belasco was played by veteran British actor , familiar to modern audiences from his role as in the movie "Batman". His role consisted of a couple of recorded lines and an on-camera appearance as an embalmed corpse seated upright in a chair.

*The books that Ann Barrett sees standing the cabinet are titled, from left to right; "Obsessive Acts And Religious Practices" by , "The Worship of Priapus" by , "The Psychology (?) of Sex (?)" by H. H. Elliot (?), "Sin And Sex", "Conation Volition", "Sex And Celibacy" by T. Long, "The Anatomy of Abuses" by , "Phallic Worship" and "Autoerotic Phenomena In Adolescence" by K. Menzies.

*Dialogue from the film has been sampled in popular songs by the bands , and Orbital.