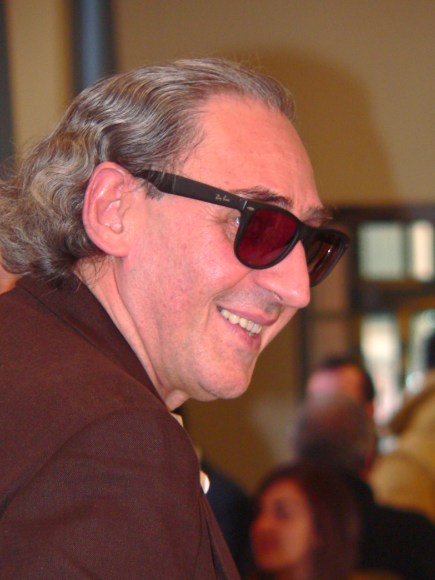 He is considered one of the most original personalities in Italian music from the 1970s to now. Together with Alice, Franco Battiato represented Italy at the with the melody "". Battiato's songs are dreamy, controversial collages of images and sensations, very experimental and convoluted, rich of esoteric, philosophical and East Asian religious themes.

His collaborations (from 1994 onward) with the nihilistic-cynical philosopher have added further depth to his apparently nonsensical lyrics, with references to , and other anarchistic and problematic thinkers.

Francesco Battiato was born in Jonia di , in the ().

At the age of 20 he moved to and in 1968 he obtained the first musical contract. He scored some success with the romantic song "È l'amore". After further covers of pop songs, he met the experimental musician Juri Camisasca in 1970 and collaborated with Osage Tribe, an Italian psychedelic- band. As a solo artist, he released the science-fiction single "La convenzione" ("The convention"), one of the finest Italian progressive rock songs of the 1970s.

Starting from 1971, Battiato devoted much of his efforts to experimental , producing a series of LPs that remained almost unknown at the time, but are now eagerly sought by collectors worldwide. Starting out with electronic with some emphasis on vocals, his music became increasingly experimental, gradually moving into the realms of and minimalism: "Fetus" (1971, whose cover was censored), "Pollution" (1972), "Sulle Corde di Aries" (1973), "" (1974) and "M.lle Le Gladiator" (1975). "" is a haunting yet largely conventional exploration in the eletronic style reminiscent of and even German experimental rock band .

After having been fired by Ricordi, Battiato signed a contract for . Largely, though not wholly, abandoning the experiments of the early years, he moved to a more pop-oriented style which afforded him ever increasing popularity with Italian audiences. In this period his albums were usually in collaboration with the renowned musician and violinist Giusto Pio, whose two later albums were produced by Battiato.

After "L'era del cinghiale bianco" ("The Era of the White Boar") 1979 and "Patriots" (1980), Battiato obtained astounding success with "La voce del padrone" ("The Master's Voice") in 1981, which was the first Italian LP to sell more than one million copies. The commercial success was confirmed by "L'arca di Noè" ("Noah's Ark") in 1982. Songs like "L'era del cinghiale bianco", "Prospettiva Nevskij" ("Nevsky Prospekt"), "Centro di gravità permanente" ("Constant Centre of Gravity"), "Bandiera bianca" ("White Flag"), "Voglio vederti danzare" ("I Want to See You Dancing" ), with their original mix of Oriental and philosophical fashions with pop rhythms, established Battiato's status as one of the most capable and intelligent musicians in Italy. Many of the songs of this era contained parts in English and, most of all, Arab, a language that Battiato had started to study after a trip to . Battiato's albums were also published in Spanish and English versions.

"Orizzonti perduti" ("Lost Horizons") 1983, which Battiato himself called "a kipper", was followed by the successful "Mondi lontanissimi" ("Most Distant Worlds", 1985), which featured a solo version of the popular "" ("The Trains of Tozeur), originally a duet with Alice performed at the 1984 , the science-fiction/metaphysical "Via Lattea" ("Milky Way") and "No Time No Space".

More than 300,000 copies of 1988's "Fisiognomica" (Physiognomic) sold, confirmed Battiato's status. It contained the song "Nomadi" ("Nomads"), written by his old friend Camisasca, who in the meantime had retired to a Franciscan convent. One of the songs on the album was performed by director/actor in his 1989 movie "Palombella Rossa".

"Come un cammello su una grondaia" ("Like a Camel in a Gutter") 1991, was divided into two parts, the second made up by classical German . Among the pop songs, "Povera patria" ("My Poor Father Land"), a poetical denouncement of Italy's lack of culture and honesty, became a kind of hymn of the civil society rebelling against the attempts of the following year against judges and .

Pio and Battiato also worked as producers for several singers, including Alice and Giuni Russo, and for two of 's albums.

Starting from 1987, Battiato also produced several classical operas: "Genesi" (1987), "Gilgamesh" (1992) and "Il Cavaliere dell'Intelletto" (1994). In 1990 he also began to experiment with painting, initially under the pseudonym of Süphan Barzani.

In 1994 Battiato began to collaborate with the Sicilian philosopher , who was to write almost all the lyrics of his following albums.

After the tentative "L'ombrello e la macchina da cucire" of 1995, in 1996 the duo published what is considered their best work so far, "L'imboscata", containing the romantic hit "La cura", elected best Italian song of the year.

"Gommalacca" (1998, with an unusual stress on hard rock), "Ferro battuto" (2000) and "Dieci stratagemmi" (2004) continued on the same path, with variations mainly set by Battiato's unceasing desire for musical experimentation.

In 2003 Battiato released his first feature film, "Perduto amor" ("Lost love"), for which he also composed the soundtrack. The movie won the Silver Ribbon for the best debutant director. However, heavy criticism struck against his following movie, "Musikanten", a rather experimental work about Beethoven's last four years of life. The German musician was played by the Chilean director .

In 2004 he hosted a cultural show for a satellite channel of , the Italian state network.

* In 1999 Battiato released a collection of covers of Italian love songs, "Fleurs". He repeated the experiment three years later with an album inexplicably numbered "Fleurs 3", no "Fleurs 2" having been released in the meantime.
* Battiato's cover of ' "," originally released on "Fleurs", is prominently featured in the 2006 film, "".