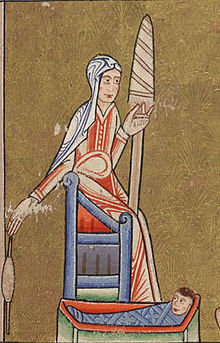 Spinning with a spindle (below) and distaff (above)

A spindle is a wooden spike (known as the shaft) used for spinning wool, flax, hemp, cotton, and other fibres into thread. It is commonly weighted at either the bottom (sometimes called a drop spindle) middle or top, most commonly by a circular or spherical object called a whorl, and may also have a hook, groove or notch, though spindles without these are also common. Spindle whorls have been found in archaeological digs around the world.

Other forms of spindles include supported spindles, such as the large Navajo spindle and the tiny cotton-spinning tahkli. The spinning wheel is also used for the same purpose.

The spindle in myth and legend

The spindle is closely associated with many goddesses, including the Germanic Holda, Norse Frigg and Freya, Isis, Artemis and Athena. It is often connected with fate, as the Greek Fates and the Norse Norns work with yarns that represent lives. Because the spinning wheel was not in common use before the 16th century in Europe, the older stories are certainly referring to hand spinning done on a spindle. Chief among these is Sleeping Beauty, where the princess is erroneously shown to prick her finger on some part of a spinning wheel in modern illustrations, rather than a spindle.