Nuneaton railway station serves the large town of Nuneaton in Warwickshire, England. The station is managed by London Midland.

It is situated at the point (map: SP364921) where the Birmingham - Leicester route crosses the Trent Valley Line section of the West Coast Main Line 97 miles (156 km) north of London Euston, with a branch running to Coventry. It was known, during the period (1873–1964) when Nuneaton Abbey Street station was open, as Nuneaton Trent Valley, but it is now Nuneaton's only railway station, though many local people still refer to it as Trent Valley.

The station has the PlusBus scheme where train and bus tickets can be bought together, at a saving.

In 2004 two extra platforms were built on the site of the former goods loop and engineers' sidings. These new platforms - 6 and 7 - were to accommodate the Birmingham - Leicester - Stansted Airport services and reduce the number of conflicting movements across Nuneaton South Junction. This work also removed the pointwork which had allowed trains to run from Coventry to Leicester via a reversal at Nuneaton.

Nuneaton is a Penalty fare station when traveling on London Midland services.[1]

The station was opened in 1847 when the London North Western Railway opened the Trent Valley section of the West Coast Main Line in order to avoid the congested areas of Coventry and Birmingham. A second station, Nuneaton Abbey Street, was opened in 1873 to link the nearby cities of Birmingham and Leicester and also to link Ashby-de-la-Zouch and Coalville via the Ashby and Nuneaton Joint Railway in order to access the large coal reserves located there.

Nuneaton’s railway services were considerably reduced by the Beeching Axe of 1963 which led to the closure of local stations at Nuneaton Abbey Street, Stockingford and Bedworth in 1964. In addition, on 18 January 1965 the Coventry – Nuneaton line closed to passengers. 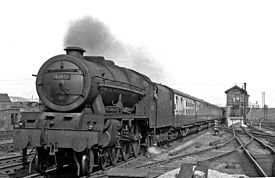 The Ashby and Nuneaton Joint Railway line was closed in 1965 and its track lifted in 1970. Part of it was later reopened as the heritage Battlefield Line.

On 6 June 1975 six people died and 38 were injured in the Nuneaton rail crash just south of the station.

The Coventry – Nuneaton line reopened to passengers in 1988 as did Bedworth station. This service continues to operate.

Birmingham to Peterborough Line CrossCountry operate two trains per hour, westbound to Birmingham New Street via Coleshill and eastbound to Leicester via Hinckley. One of the two services runs fast to Leicester and continues to Stansted Airport via Melton Mowbray, Peterborough, Ely and Cambridge.