From 1863 to 1935, National Bank Notes were issued by banks throughout the country and in U.S. territories. Banks with a federal charter would deposit bonds in the U.S. Treasury. The banks then could print banknotes worth up to 90% of the value of the bonds. The federal government would back the value of the notes - the issuance of which created a demand for the government bonds needed to back them.

The program was a form of monetization of the Federal debt. Bonds eligible as collateral for posting to the Treasury were said to have the "circulation privilege" and the interest they bore provided seigniorage to the National Banks. 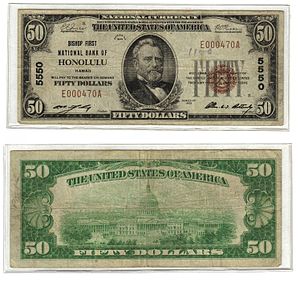 Through much of their earlier history of issue, national banknotes used designs in which the issuing bank's name was prominently displayed,rather than "The United States Of America". One design used for many years featured a portrait on the obverse, near the left edge, and the bank's name printed in prominent shaded type in the middle. The historical figures portrayed did not usually correspond to those seen on similar denominations today. For example, one design for the five-dollar denomination has President Benjamin Harrison's portrait rather than that of Abraham Lincoln.

This changed during the last years of national banknote issues. After small-size notes came into use, national banknotes now began to be issued using the same designs as most of the other types still in use at the time--Federal Reserve Notes, United States Notes, Silver Certificates, and the last Gold Certificate issues. The issuing commercial bank's name and promise to pay was now over-stamped in plain black type to the left of the now centered portrait. By this time, also, the portraits depicted the same Presidents and other historical figures that we see today.

End of the Program

National bank notes were retired as a currency type by the U.S. government in the 1930s during the great depression as currency in the U.S. was consolidated into Federal Reserve Notes, United States Notes, and Silver Certificates - and privately issued banknotes were eliminated. The passage of the Gold Reserve Act created an accounting gain for the Treasury, part of which was used to provide funds to retire all of the bonds against which National Banks Notes could be issued.

Sometimes these notes are called "hometown" notes, with their popularity deriving from the wide range of towns and cities that issued them. In the paper money hobby, especially in the U.S., these notes are avidly studied and collected. Some examples of rare banks, towns, states and combinations thereof are quite valuable; for example, a note from Walla Walla, in what was then Washington Territory, sold for $161,000 in an auction held in June 2010 by Heritage Auctions.[2]