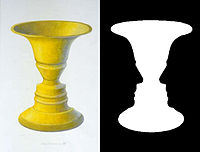 Rubin's vase is an optical illusion in which the negative space around the vase forms the silhouettes of two faces in profile a well-known example of figure-ground reversal.

Spaces Between Moth is another example of the optical illusion where the faces and arms reveal a moth in the white.

Negative space, in art, is the space around and between the subject(s) of an image. Negative space may be most evident when the space around a subject, and not the subject itself, forms an interesting or artistically relevant shape, and such space is occasionally used to artistic effect as the "real" subject of an image. The use of negative space is a key element of artistic composition. The Japanese word "ma" is sometimes used for this concept, for example in garden design.[1][2][3]

Elements of an image that distract from the intended subject, or in the case of photography, objects in the same focal plane, are not considered negative space. Negative space can be used to depict a subject in a chosen medium by showing everything around the subject but not the subject itself. Usage of negative space will produce a silhouette of the subject. Most often, though, negative space is used as a neutral or contrasting background to draw attention to the main subject which is then referred to as the positive space.

The use of equal negative space, as a balance to positive space, in a composition is considered by many as good design. This basic and often overlooked principle of design gives the eye a "place to rest," increasing the appeal of a composition through subtle means. The term is also used by musicians to indicate silence within a piece.

It can be a difficult concept to grasp. One tool used by art teachers in teaching about positive and negative space was popularized in the book Drawing on the Right Side of the Brain. In the exercise, students copy from an upside-down drawing or photograph. Because the picture is upside-down, students don't readily recognize the objects in the picture. They are able to give equal attention to the positive and negative shapes. The result is often a much more accurate drawing.