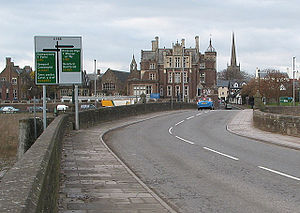 Monmouth School is an HMC boys' boarding and day school in Monmouth, Monmouthshire in south east Wales. It was founded in 1614 by William Jones. It is run as a trust, the William Jones's Schools Foundation, by the Worshipful Company of Haberdashers, one of the Livery Companies. The Foundation's returned accounts for 2008/9 show an income of £19,605,000, against an expenditure of £19,116,000.[2]

In 1613, William Jones, a prominent merchant and haberdasher, gave the Haberdashers’ Company £6,000, followed by a further £3,000 bequethed in his will on his death in 1615, to "ordaine a preacher, a Free-School and Almes-houses for twenty poor and old distressed people, as blind and lame, as it shall seem best to them, of the Towne of Monmouth, where it shall be bestowed".[3] Jones was born at Newland, Gloucestershire and brought up in Monmouth, leaving to make a sizeable fortune as a London merchant engaged in the cloth trade with the continent.[4] Jones' motivations for his bequest appear partly philanthropic and partly evangelical; "the priority given to the preacher illustrates his concern to convert an area in the Marches which was still, when the school opened in 1614, strongly recusant."[5] Nothing remains of the original buildings. In 1865, the school was rebuilt and as, a result of rising revenues from investments, the original foundation was re-organised in 1891 to support a new girls’ school and an elementary school in the town, as well as a boys grammar school in Pontypool.[6] The elementary school was transferred to County Council control in 1940 with West Monmouth School at Pontypool following in 1955.[7] This left the William Jones’s Schools Foundation responsible for Monmouth School and Haberdashers' Monmouth School for Girls- also known as HMSG, both of which acquired Direct Grant status in 1946.[8] In 1976, with the ending of the Assisted Places scheme, the school became fully independent.[9] 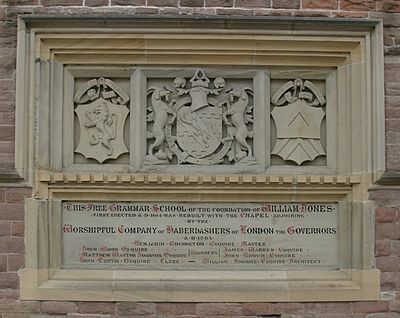 Plaque describing the foundation of the school

The rebuilding of the school (1864–1878) was mostly undertaken by William Snooke who built the chapel, two schoolrooms and a classroom in 1864-5, followed in the 1870s by the library, Headmaster's House and the buildings which now form Monmouth House and Hereford House.[10] Snooke also redeveloped the Jones Almhouses, on Almshouse Street, which incorporates a large inscription panel describing the benefactions of the Jones Foundation.[10] School House, with its ceremonial entrance facing the Wye Bridge, was built by Henry Stock in 1894-5.[10] The war memorial, of 1956, is by Francis W. Stephens.[10] More modern developments include the Hall of 1961, redeveloped in the early 21st century and now the Blake Theatre, the Red Lion Block of the same date, and the Science Block of 1981-4.[10] In November 2008, a £2.3 million sports pavilion was completed and opened by the former Welsh and British Lions captain, Eddie Butler, an old boy of the School. It was designed by the architects Buttress Fuller Alsop Williams. In January 2011, work is scheduled to begin on 'The Heart Project', which will see redevelopments on the main school site, as well as a new boarding house being developed on the site of the old Grange building. Chapel House is also to become the new lower school boarding house whilst St James House is to be sold.[10]

With 600 pupils the school offers boarding and day places as well as preparatory departments in a single-sex environment. To enable a wide range of A and AS level subjects to be taken, there is some mixed-sex teaching in the Sixth Form with the sister school, Haberdashers Monmouth School for Girls (HMSG).

There are three main age divisions in the school; lower (forms I and II) middle (forms III, IV, and V) and sixth form (forms VI.1 and VI.2). Within these divisions, pupils are members of different houses as follows: Wye and Dean Houses, the lower school day houses, which are incorporated under one roof in a building at the south of the campus; St. James' House has been recently moved to chapel house, the lower school boarding house, located off-site nearby in St. James' Square; Severn House, the newest of the middle school day houses, located on the ground floor of the middle school house complex at the north of the campus; Town House; Monmouth House, one of the original day houses, located below Hereford House in a building which also houses the Classics and Religious Studies departments and is connected to Severn and Town Houses; Hereford House, another of the original day houses; Weirhead House, a boarding house, located at the south of the campus; New House, a boarding house, located next to the administrative buildings in the centre of the campus; School House, a boarding house, located next to the middle school house complex at the north-east of the complex; Chapel House, a Grade II listed building, located offsite, on the Hereford Road to the north of the town and Tudor, Glendower and Buchanan Houses, which comprise the sixth form centre and V1.2 boarding.

The rear of Chapel House away from the town in 2001

The schools offers a range of subjects, over 30 being available for study to AS and A Level, through collaboration with HMSG. This selection is supported by facilities such as the School Library, Science laboratories, computer suites, and design technology workshop.

In 2004 The Blake Theatre, was opened. Funded by Bob Blake, it is used as a venue for performances by both the boys' and girls' schools, and by external performers. It was officially opened by HRH The Prince Edward, Earl of Wessex.[11]

The school also possesses a large music school with an auditorium, teaching rooms and practice rooms.

Extra-curricular activities include foreign expeditions, music and drama events as well as the school newspaper, The Lion, and its magazine, The Monmouthian. The School also boasts a large CCF (Combined Cadet Force) Contingent which has both an Army and RAF Section and is operated in collaboration with HMSG.

The school's three main sports are rugby, rowing and cricket. The sports facilities include a new sports complex[12] which houses a six-lane swimming pool, indoor sports facilities, a weight and fitness suite, tennis courts, and a full size astroturf pitch which can be used for a variety of activities. The school's sporting tradition is reflected in the fact that many boys play at county or national level, especially in rugby, rowing, and cricket. In addition to rowing and rugby the school offers a range of other sports which include Association football, athletics, badminton, canoeing, climbing, cricket, cross country, fencing, fitness training, hockey, golf, sailing, shooting, squash, sub-aqua, swimming, tennis, and water polo.[13]

In June 2009, the school paid out £150,000 to settle a landmark pensions rights case brought by female catering and support staff who claimed that, as part-time workers, they had been unjustly excluded from the school's pension scheme.[14]