The Princeton University Band serves as the marching band and pep band of Princeton University. Like most other Ivy League bands, it is a scramble band. To members and fans, it is often known as the PUB (pronounced Pea You Bee) or simply The Band. Many alumni refer to it as the Tiger Band. 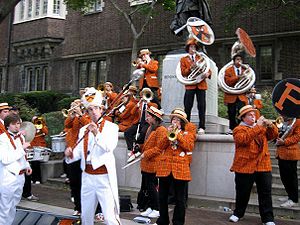 Playing at University of Pennsylvania's campus.

The modern Princeton University Band was established in October 1919 when a group of undergraduate musicians decided that a regular musical presence was needed at Palmer Stadium, home of Princeton's multi-time national champion football team; however, these events were in many ways merely a reorganization of the preexisting R.O.T.C. Band that had served a much smaller role on campus several years earlier, making Princeton's Band one of the oldest in the country. Some of the band traveled to perform at the Yale Bowl for the season's only away game, beginning a long tradition of the PUB attending all football games, home and away.

For over a decade, the PUB performed on a tight budget, clad only in black sweaters with bow-ties and white pants; however, thanks to the contributions of many alumni supporters in 1936, the band was able to afford new instruments, music, and, most notably, new uniforms — black blazers with orange collars and a Princeton Band insignia on the breast pocket.

In 1937, the PUB expanded its role at Princeton by playing not only during football games, but also basketball and ice hockey. By the 1940s, they were playing at nearly all home basketball and hockey contests, as well as at several lacrosse matches and in some more formal spring concerts.

The nineteen-fifties witnessed an era of great transition for the band, as it gradually became more like the Princeton University Band with which most are familiar with today. In 1952, the band switched from black to orange-and-black plaid blazers and continued to wear the straw hats that had been introduced a year or two earlier. With this change, the band started the tradition of wearing colorful formal wear on the field — something that has since been emulated by every Ivy League band at one point or another, as well as those of Stanford, Virginia, Rutgers, and Rice. The trendsetting new uniform was even featured on the cover of the October 1955 issue of Sports Illustrated magazine

From 1949 to 1981, the PUB did not miss a single football game. At 32 years and 293 games, this is one of the longest streaks in the history of college marching bands, and substantially longer than the streak of the current holder of consecutive games attended, USC's Spirit of Troy. The PUB has never missed a home game.

From the early 1940s through the end of the '50s, the band's field-show format transitioned from corps style to scrambling accompanied by comedic scripts. Field scrambles without spoken accompaniment were used occasionally in field shows as early as 1941 ('38 according to some alumni), with gradually increasing use over the next 15 years. In 1955, the band began experimenting with scripts to go along with the half-time scrambles. The first script on record was in a home opener against Rutgers University in 1955, by which time scrambling was a well-established feature of field performances. However, the band didn't entirely stop marching until the 1970s.

The PUB's halftime format has caused problems over the years. Not only have a number of institutions banned it from performing, like the United States Military Academy at West Point and, until recently, Lafayette College, but there was serious talk in the 1970s and '80s of disbanding the group at Princeton.

To placate the concerns of administrators and alumni at Princeton, the PUB hired Jack Hontz, a marching band director from Strath Haven High School in Pennsylvania, as a musical advisor. The brother of a former band member, Hontz has helped the band make the most out of its musical performances and steered the band away from behavior that may have attracted the ire of the university. While very helpful, Hontz has filled only a consultory role for the PUB, offering advice only when it is needed and leaving all leadership and decision-making responsibilities to the students.

As Princeton football became less nationally competitive in the latter half of the 20th century, the PUB began to focus on basketball, ice hockey, and lacrosse, following many teams to NIT, ECAC-HL, and NCAA tournaments, including several national championships, since as early as 1965. From 1990 to 2000 the PUB played at over twenty NCAA tournaments alone, including the 1998 field hockey national championship.

The PUB is a recognized student organization of Princeton University and is almost entirely run by a twelve-member officer corps consisting of the President, Drum Major, Head Manager ("Mom"), Student Conductor (the "Stud Conductor"), Treasurer, four Drillmasters ("DMs"), Alumni Coordinator and two Librarians ("Libes"). A professional music advisor, paid out of the band's operating fund, is the only non-student involved in directing the band.

During the fall football season, the band performs at all Princeton home games and all away games to which it is allowed by the host institution. At each game, besides playing in the stands during pauses in the game, the band performs a pregame show and a halftime show, each of which consists of one to three songs with accompanying formations, accompanied by a humorous script. The PUB also has a repertoire of cheers which are invoked throughout the game - often mildly offensive, but amusing nonetheless.

Like every other Ivy League scramble bands, the PUB has a section of unusual instruments, which the PUB calls "trash percussion."

Every Halloween, the band is invited to participate in the Greenwich Village Halloween Parade, to which it is particularly well suited thanks to its orange and black uniforms and colorful performance techniques. The band has also made appearances in a number of other parades including the South Amboy St. Patrick's Day Parade, the Gross National Parade, and Philadelphia's Independence Day Parade.

After the conclusion of the football season, the Band transforms into a pep band and plays in the stands at as many Princeton men's and women's hockey, basketball, and lacrosse games as possible, including some away games. The band makes an annual trip to Penn's Palestra for the Princeton-Penn game, as well as occasional trips to nearby schools such as Columbia, Yale, Brown, and even Cornell for basketball and hockey contests. As Princeton's basketball and hockey teams are often among the best in their respective conferences, the band regularly travels with the teams to post season tournaments. Other than the absence of scrambling and formations, the Band's presence at these events is much the same as at football games.

At the end of the academic year, the band remains on campus for Reunions, a three day celebration of Princetonians past and present. Since 1936 the band has led the annual P-Rade, a parade of alumni that begins with the University President, the oldest alumnus, the band, and the 25th reunion class. 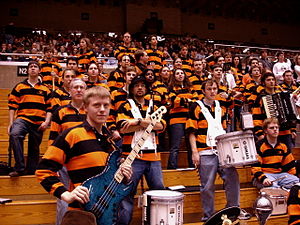 The band in its alternate uniform at a basketball game.

The standard full uniform of the PUB, used for football season, parades, Princeton Reunions, and other formal events, consists of black pants, white shoes, a white dress shirt with solid black tie, Italian "boater" hat, and the distinctive orange-and-black plaid jacket. The drum major and student director wear white pants, long-tailed dinner jackets and bow ties. The plaid wool used in the uniforms was custom manufactured and donated by a Princeton alumnus in 1952 at Bennington Mills in Vermont. As such, the band owns the exclusive rights to the particular plaid design found on the jackets.

In 2001, the band had custom orange-and-black striped rugby shirts made for use at home basketball and hockey games. Prior to this, the band wore its signature hats and jackets with blue jeans and t-shirts for winter sports, something that is still done for away and major home basketball and hockey games, lacrosse games and other spring performances today.

Also, graduating seniors find a way to adorn their beer jackets with the plaid in some fashion, making alums of the band easy to spot. 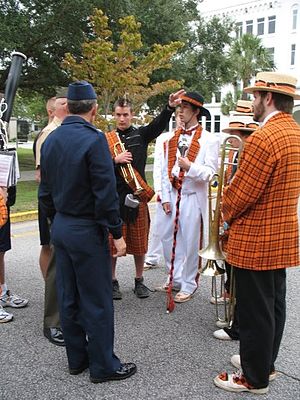 Later that day during the game, the Princeton Band performed one of their characteristic half-time shows that had been approved and censored by both Princeton University and Citadel administrators. Despite these precautions, the large student section booed loudly during the entirety of the field performance, and many students, alumni, and other fans were offended by the band's unique brand of humor.

During the second half, approximately fifty cadets left the Citadel student section to surround and heckle the Princeton Band. After stern admonitions from Citadel administrative officers, the students returned to the student section. The band inadvertently performed Princeton music while Citadel cadets were ceremonially folding the American flag after the game. This only inflamed the anger of the cadets.

The Cadets' behavior prompted apologies from numerous persons affiliated with The Citadel including President Gen Rosa, (who didn't apologize and actually noted he "can certainly appreciate the enthusiasm," by the cadets), Lt Col Graham, the student body president, and many alumni and Charleston residents. The Band suffered no negative consequences. 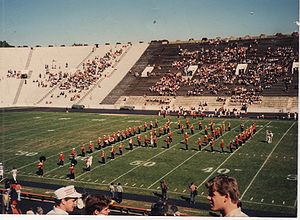 The Double-Double Rotating P in 1984.

Traditionally, the PUB ends its football pregame shows with a formation known as the "Double-Double Rotating P." The formation is a large outline letter "P" comprising an outer loop in a "P" shape and a smaller inner loop forming the interior of the letter. In this formation, the PUB plays the march "Going Back to Nassau Hall." When the band reaches the trio, the P itself remains stationary, but the members of the band start to move around the perimeter of the P, with the outer loop moving clockwise and the inner loop moving counterclockwise. The band plays the trio twice, and upon beginning the second time through the trio, the two loops reverse their respective directions.

At home games, this performance immediately leads into performance of The Star-Spangled Banner. 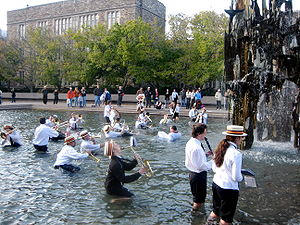 After football victories at Princeton Stadium, and regardless of the game's outcome if the Brown University Band is present at Princeton, the Band goes to the fountain at the Woodrow Wilson School and plays a concert from inside.

At the conclusion of each school year, the band takes a trip to White Castle and holds an eating contest. No time limits are enforced. Whoever can eat the most Slyders is named King of the Castle for that year. The top-eating girl can be referred to as Queen of the Castle, but the title is not traditionally considered part of one's title. Style points are awarded for some eating methods, including:

The current record holder is Marcus Theus '12 who in 2011 ate a recorded 33 burgers in one sitting. For more information on the competition, refer to the official website.

The Band is famous for its irreverent antics and illicit behavior. As an incentive to motivate members to maintain this tradition, the band has for many years presented several awards to its members commemorating a variety of outrageous acts:

The lyrics to the band's theme song:

Friends of Tiger Band (FOTB) is the official organization for alumni and other supporters of the PUB. Proving that the PUB is forever, band members automatically become members of FOTB upon graduation. FOTB has three key functions: (1) hosting Band Reunions following the Home Big Three game and the P-Rade, (2) publishing the FOTB newsletter, and most importantly (3) providing support, both financially and in dealings with the University administration.

Also:
Robert Sour A.B. 1925, who went on to co-write lyrics to jazz ballad Body & Soul and become President at BMI, did not play in the band as a Princeton student (he was a pianist); however, he was very involved as an alumnus, offering support and writing songs for the band.