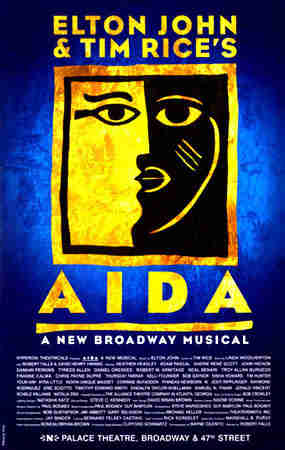 "Aida" is a musical drama in two acts based on 's Italian-language opera by the same name, which is based on a story by which is based on Shakespeare's . The musical was produced by Hyperion Theatricals, a unit within , with music by , lyrics by , and book by , Robert Falls, and .

"Elaborate Lives: The Legend of Aida" had its world premiere at the Alliance Theatre in with the production running from September 16 to November 8, 1998. A new, revised production opened on November 12, 1999 at the in . The Broadway production, titled "Elton John and Tim Rice's Aida", ran at the Palace Theatre from March 23, 2000 to September 4, 2004 for a total of 1,852 performances (and 30 previews). There was also produced a national tour and several international productions. Aida has recently become popular among school and community theaters. Licensing of these amateur productions of Aida is through .

;Act IIn the Egyptian wing of a modern museum, a man and a woman touring the exhibit catch each other's eyes. A statue of Amneris, a female Pharaoh, comes to life ("Every Story is a Love Story"). Amneris transports us to ancient Egypt, where Radames, captain of the Egyptian army, and his men are returning from an expedition through the land of Nubia, Egypt's long-time enemy ("Fortune Favors the Brave"). When his soldiers capture a group of Nubian women, he is captivated by one of the women, Aida, who tries to free herself by out-dueling one of his soldiers. He forces her to wash his back, but she refuses, saying that although the Egyptains took everything from the Nubians, they will never take their pride ("The Past Is Another Land"). Radames saves her and the other women from the copper mines by sending them to the palace groundskeeper instead, but sends Aida as a handmaiden to his betrothed, Princess Amneris. Radames' father, Chief Minister Zoser, greets his son with news that the Pharaoh is dying, and Radames must prepare to become the next ruler of Egypt ("Another Pyramid"). Unbeknownst to Radames, his father is poisoning the Pharaoh in order to accelerate Radames' ascension to the throne.

Radames' Nubian servant, Mereb, is a young man who has learned the tricks of survival in Egypt. While delivering Aida to the princess, Mereb recognizes her as the daughter of the Nubian king under whom he'd served during his days in Nubia. She commands him to keep her identity a secret, lest the Egyptians kill her ("How I Know You"). Presented to Amneris, Aida is liked immediately, and she perceives that the Princess' love of fashion only serves as a mask of her insecurities ("My Strongest Suit"). At a banquet, Amneris and Radames learn from the Pharaoh that they are to marry in seven days, leaving the captain distraught that his days as an explorer have ended ("Fortune Favors the Brave (Reprise)"*). Together, he and Aida share their dreams and regrets ("Enchantment Passing Through").

Later that night, Amneris worries about her father's illness, and finds in Aida someone who understands and encourages her ("My Strongest Suit (Reprise)"). Bursting into his fiancée's chamber, Radames steals a moment with Aida to share his growing attraction to her. Aida is taken by Mereb to the Nubian camp, where she submits to her people's pleas to lead them ("Dance of the Robe"). When she implores Radames to help the Nubians, he opens his heart by giving his possessions to them ("Not Me") and declaring his love for her ("Elaborate Lives"). Unable to fight her feelings any longer, she falls into his embrace. Their bliss is interrupted by news that Radames' armies have captured Amonasro, king of Nubia and Aida's father. Unable to comfort her, Radames leaves Aida in distress. Rallying her people, Aida assures them that Nubia will never die ("The Gods Love Nubia").

;Act IIAida, Amneris, and Radames are entangled in conflicted loyalties and emotions ("A Step Too Far"). Aida and Mereb bribe their way into Amonasro's prison cell, where she's reunited with her father. Mereb hatches a plan to escape with the king during the commotion of Amneris' wedding. To save her father and her nation, Aida must betray the man she loves ("Easy as Life"). Meanwhile, Zoser discovers Radames' affair and warns his son that it could cost him the throne, but Radames no longer shares his father's ambitions ("Like Father, Like Son"). After an emotional bout with his son, Zoser orders his men to find Aida and kill her.

At the Nubian camp, Aida receives a written apology from Radames for the thoughtless way he acted upon hearing of Amonasro's capture ("Radames' Letter"). When Egyptian soldiers arrive seeking Aida, another Nubian, Nehebka, sacrifices herself so that the princess can live. Now even more determined to leave Radames forever, Aida goes to say good-bye to him over Mereb's objections ("How I Know You (Reprise)"). Radames informs Aida that he's calling off the wedding. Aida knows that this would ruin her father's escape and tells him he must go through with it ("Written in the Stars"). Radames agrees, on condition that she escape to freedom on a boat he will provide. The heartbroken lovers part, but Amneris has overheard their entire conversation and tries to face the fact that her upcoming marriage is a sham ("I Know the Truth").

News of Amonasro's escape disrupts Amneris' wedding. Radames learns the truth of Aida's identity when he arrives at the docks just as she's about to board his boat with her father. Although he is angry that Aida hid this from him, she says she never lied about loving him. In the ensuing chaos, Mereb slays an attacking guard but is mortally wounded by Zoser, and Radames makes possible Amonasro's escape by cutting the rope tied to the dock, but Aida stays with Radames and a dying Mereb. Zoser flees, and Mereb dies in the arms of his kind master and beloved princess. Radames and Aida are then arrested for treason. At the ensuing trial, Pharaoh announces of Zoser's apprehension and sentences both Aida and Radames to be buried alive. Amneris reprises her role as future Pharaoh by convincing her father to let the lovers die in the same tomb, an act of mercy for two people she has come to love. Facing death, Aida looks to Radames for strength ("Elaborate Lives (Reprise)"). As they are slowly deprived of light and air ("Enchantment Passing Through (Reprise)"), Radames swears he will search through a hundred lifetimes to find her again.

Back in the contemporary museum, the spirit of Amneris watches as the modern man and woman are strangely drawn to each other. They are the reincarnations of Aida and Radames, finding in each other a new beginning ("Every Story is a Love Story (Reprise)").

"Fortune Favors the Brave (Reprise)" is not featured on the Original Broadway Cast Recording.

In the Broadway production, originally portrayed the title character of Aida along with co-star as Radames. , who was with the project since its first workshop, continued in the role of Amneris.

Pascal returned to the Broadway cast as Radames on June 28, 2004 and stayed with the show until its closing on September 5, 2004.

From the Atlanta staging, only , as Aida, and , as Amneris, remained. joined the cast as Radames for the Chicago run. The Chicago run at the Cadillac Theatre also had its share of drama. On Nov. 13, 1999, a set mishap during the final moments of the performance injured stars Headley and Pascal. According to an eyewitness report, while the two actors were being conveyed in a suspended boxlike "tomb" at the climax of the show, the set piece broke from its support and plunged approximately eight feet to the stage. A subsequent press release from the show's publicist stated that Headley and Pascal sustained minor injuries and were taken to Northwestern Memorial Hospital for examination. Both were released from the hospital a few hours later. From then on, the tomb remained on the ground.

The original Atlanta staging conceived of the play with a nearly empty set, displaying only a six-ton gold pyramid-shaped set piece in the center. Driven by pneumatic controls, the pyramid's sides and bottom could be turned and rotated to suggest various locations such as a ship stern or a tomb. However, the piece, constructed at a price of nearly $10 million, frequently broke down, and a new production designer was hired for restaging in Chicago. Nothing of the original Atlanta set design remained in the new production.

Elton John's music for Aida is stylistically eclectic. "Another Pyramid" is a modern reggae number; "My Strongest Suit" draws heavily on Motown, "The Gods Love Nubia" draws on gospel. There are numbers, e.g., "Not Me," "Elaborate Lives," "A Step Too Far," "Written in the Stars," that reflect Elton John's pop style. There is also a strong influence of African music. These styles are used without much attention to historical authenticity, rather, there is a mix of African (mostly west African), Indian and Middle Eastern influences. Probably the nearest stylistic parallel to the work as a whole is Elton John's "The Lion King", another musical with strong ethnic elements.

A number of recordings are available for "Aida":

# "Elton John and Tim Rice's Aida: Original Broadway Cast Recording" was released in 2000, and is a conventional that includes all twenty-one musical numbers from the Broadway incarnation of the show.
# "Elton John and Tim Rice's Aida", sometimes known as the "Concept Album", was released in 1999 in advance of the theatrical production, and features Elton performing the music along with a number of pop stars.
# Several foreign language recordings: Dutch, German, Hungarian, Japanese

Disney bought the rights to "Aida", the children's storybook version of Giuseppe Verdi's opera that Leontyne Price wrote in 1990 for an animated feature. The book featured illustrations by Leo & Diane Dillon. Development on the animated film was shelved and became the source material for the Broadway version.

Disney is planning a major motion picture adaptation release in 2010. According to Jim Hill Media, is in talks with Walt Disney Studios to star in the title role of the film adaption of "Aida" alongside as Amneris. [cite web |url=http://www.comingsoon.net/news/movienews.php?id=21792 |title=Beyoncé to Star in Aida Adaptation? |accessdate=2007-07-15 |work=Coming Soon Media |date=July 7, 2007]